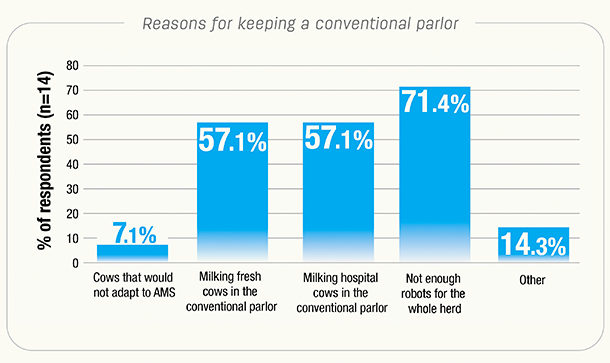 To understand the motivation and evaluate risk factors of implementing automated milking in large dairies, a survey was conducted by Dr. Daniela Bruno, Dr. Camila Lage and Dr. Fernanda Ferreira at the University of California, and Dr. Marcia Endres at the University of Minnesota.

Of the approximately 100 farms with seven or more robots in the U.S., researchers directly contacted 55 farms and received 29 responses (53%) from farms across 11 states. These farms had seven to 36 milking robots and ranged from 400 to 2,200 cows milked by the automated milking system. They’ve been using automated milking from nine months to 15 years, with the median average use at almost four years.

Results from the survey are shown below. In addition, the researchers shared this summary: “Overall, producers reported that automated milking systems have met their expectations about improving animal production and welfare and labor reduction; moreover, they would recommend the technology to other farmers but emphasized that success depend on farm aspects, farmer expectations/mindset and dealer proximity/relationship.

“However, the economic aspect of the investment is not yet clear and would benefit from further investigation. Several factors affect profitability when the farm implements [automated milking], including milk production per cow, labor costs versus savings and life span of the equipment. Adoption of this technology is certainly not an easy decision, and farmers should take their time to explore the options, talk to fellow farmers and have a good plan before making the investment.”

60.8% reported a reduction of 20% or more in the number of full-time employees after the transition.

34.7% were able to reduce the number of full-time employees by at least half.

The majority of the respondents stated existing employees had no problems adapting to the new technology, while there were still farms that had to hire new employees with different skills. 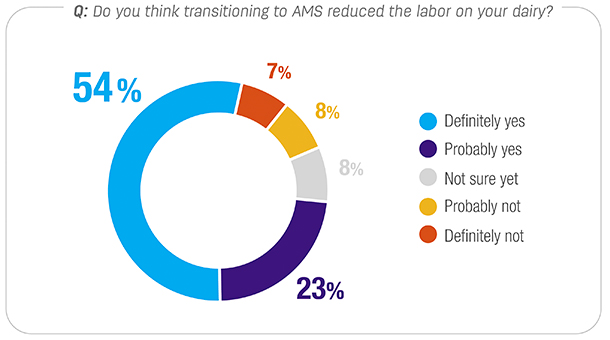 39% reported a reduction in clinical mastitis 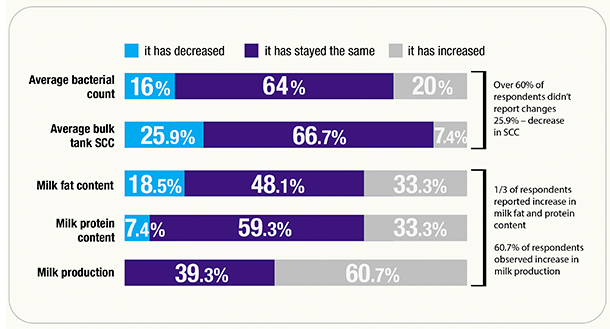 Farmers’ perceptions of changes in their systems 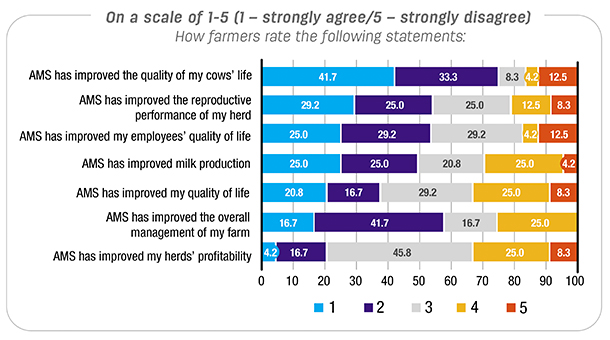