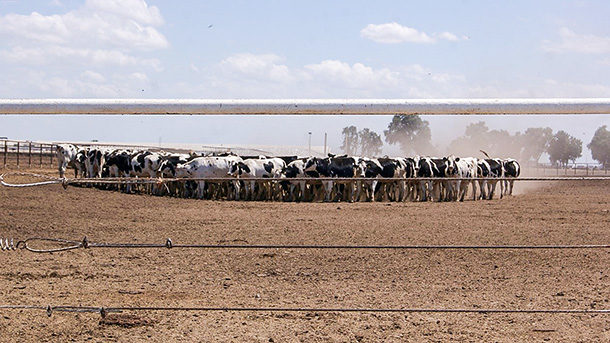 What you can lose when your cows are bunching

Matti McBride
Have you ever watched your cows stand in a big group and wondered what kind of secrets they’re sharing or how much they’re costing you by standing and socializing instead of producing milk?
Matti McBride

According to research done at the University of California (UC) – Davis, a conservative estimate for milk production losses due to bunching could be close to $11.60 per lactating cow per year.

The research was led by Sharif Aly, veterinarian epidemiologist and biostatistician between 2017 to 2019 in southern California investigating why stable flies cause cows to “bunch” or stand together. The study was in collaboration with Wagdy Elashmawy, dairy production medicine clinician at the UC – Davis Veterinary Medicine Teaching and Research Center; Fernanda Ferreira, UC – Davis herd health and management economics cooperative extension specialist; and Alec Gerry, UC – Riverside professor of entomology and extension specialist.

“What is most concerning to producers about this problem is that cows are leaving feed, water and shade to bunch together,” said Elashmawy. “For an hour or two, in some cases maybe even six hours per day. This is obviously concerning producers to see their lactating animals leaving high-producing habits to stand in the sun.”

In 2016, Elashmawy came to the U.S. from Egypt and was chosen for this project at UC – Davis to study bunching as a phenomenon. Though he wasn’t extremely familiar with it at first, Elashmawy soon learned this was something plaguing producers all over the world, from Egypt to Brazil, the U.S., and everywhere in between.

Due to the lack of literature on this problem and that the most recent research was conducted over 30 years prior, the team at UC – Davis had limited resources prior to their studies. They hit the ground running as research began in the form of extensive surveys on environment, management, nutrition/feeding practices, geographical location and facility design on 20 dairies in the southern San Joaquin Valley.

As the team analyzed different dairies, they concluded that two factors seemed to have the greatest effect on bunching: location and vegetation. Why? Vegetation, especially decaying vegetation, is where stable flies lay their eggs, and proximity to vegetation has a great effect on flies biting cattle.

Bunching is cattle’s protective mechanism to stable flies, of sorts. The less surface area of hide exposed, the less an animal is bitten. Thus, cattle take turn in the center of the bunch, getting a break from the fly bites. The team noted a bit of a swirling motion as the cattle take their turn in the center.

“One thing we wanted to understand was why cattle in pen A were bunching and why cattle in pen B weren’t,” said Aly. “Or why the dairy to the west had more bunching than its sister dairy to the east. It’s very intriguing as researchers to see that much variability in bunching even within the same management, because many of these dairies had the similar practices at different locations.”

Aly said that the extensive surveys, which even included surveying the dairy premises and surroundings, aided in determining the factors that contribute to bunching. In addition to stable flies, ambient temperature, relative humidity, pen surroundings (crops including wheat, corn and alfalfa), feeding wheat distiller grains and adding molasses to the ration were all associated with higher bunching. Stable fly abundance was higher on dairies feeding agricultural byproducts (fruits, vegetables, almond hulls) and fly activity was higher in cow pens bordered by trees.

Fernanda Ferreira analyzed the economic effects of bunching, which is where the team learned that bunching behavior results in milk losses that can cost producers up to $11.60 per lactating cow per year. This is a relatively simple translation: Cattle that are trying to fight off hordes of flies are not comfortable, resting or producing maximum volumes of milk.

“We believe that we are underestimating these economic losses with these calculations,” said Ferreira. “This is because we are only taking into account what new production or milk yield would be. For instance, we haven’t been able to measure what the effects of bunching behavior are on health outcomes and reproduction success. This is helping us find more questions that can only be answered with more research.”

The team’s next step: finding middle ground between management practices and fly control to prevent bunching from happening. This means adoption of an integrated pest management program that relies on mitigating factors that are favorable for stable flies.

To learn more about this study or to contact the researchers, visit the UC – Davis website or read their paper.

PHOTO: A herd of cattle are "bunching." Photo by Wagdy Elashmawy.