Ann Marie Krautheim has worked for the dairy checkoff in various roles for 30 years. And while she is poised to become the CEO of GENYOUth in July, her roots as a registered dietitian remain firmly in place.

That’s why the experience in February of seeing Los Angeles children react so positively to their schools’ cafeteria transformation, which included the addition of a smoothie program and, ultimately, growing meal participation, meant so much to her.

“It’s why we do what we do,” said Krautheim, who serves as president and chief wellness officer for the checkoff-founded GENYOUth. “We are increasing access to school meals for students who need them most and providing them with a positive experience with dairy, which delivers important vitamins, minerals and nourishment, not only for their bodies but their brains.

“To see the joy and excitement on the kids’ faces and the demand for the smoothies – just knowing what it meant to them makes us want to get up each morning and go to work.”

GENYOUth was established by dairy farmers as a 501(c)(3) nonprofit more than a decade ago to create healthier school communities by empowering students and providing resources for them to build healthy futures. Fuel Up to Play 60, created by the checkoff in partnership with the NFL, is GENYOUth’s flagship program. Since its creation, GENYOUth has provided nearly $40 million in non-checkoff grants and equipment to Fuel Up to Play 60 schools.

GENYOUth’s impact was front and center in Los Angeles, site of the recent Super Bowl. During the weekend of the game, the NFL annually hosts the “Taste of the NFL” event featuring celebrity chefs and NFL players to raise money for a charitable cause. Last year, the NFL selected GENYOUth as the event’s beneficiary, which led to 55 grab-and-go Fuel Up to Play 60 breakfast delivery carts presented to Tampa Bay, Florida school districts to help increase access to healthy meals, including dairy.

Following this year’s Taste of the NFL, GENYOUth and partner Frito-Lay are funding cafeteria renovations, including the introduction of a smoothie program, at five high schools in the Los Angeles Unified School District (LAUSD) where food insecurity is prominent in the community. Additional proceeds from the Taste of the NFL will be directed to schools in each of the NFL’s 32 team markets to further strengthen nutrition efforts.

The Los Angeles cafeteria transformation work, called Kool Kitchens, included new paint and wall graphics featuring Fuel Up to Play 60. Krautheim said no checkoff money was used for this effort. While the program’s goal is to increase meal participation up to 15%, it grew 60% within the first week at South Gate High School, site of the kickoff event.

But there is an added boost for dairy: LAUSD officials saw the appeal the smoothies were having with students and are implementing a program in a total of 63 area high schools. Based on USDA guidelines, each smoothie must include a serving of milk and a serving of yogurt.

Karen Kafer, a registered dietitian who serves as senior vice president of health partnerships for GENYOUth, also was touched by what she experienced at South Gate High.

“Everyone was taking pictures when the kids walked through the door,” Kafer said. “It was heartwarming to see the excitement on their faces and how fabulous the cafeteria looked, and they all wanted a smoothie. The cafeteria staff took so much pride in doing this for their students, and that’s part of why the program was expanded to more high schools.”

Manish Singh, director of food services for LAUSD, said the enhancements and smoothies have led to an additional 220 students on average coming to the South Gate cafeteria, including many who previously never ate school meals.

“We see more students stay and eat in the dining area, and students have stated they now have a reason to hang out in the space,” Singh said. “We serve a student population that may face food insecurity, and all students deserve aesthetically pleasing spaces. When the dining area is a nice inviting space, and incentives like smoothies and other healthy and delicious items are added to the menu, students are excited to participate in the meals program.

“We greatly appreciate GENYOUth’s support, as it will make a difference in our students’ lives.” 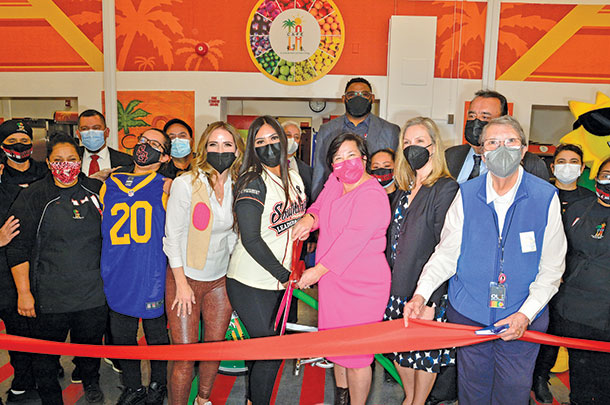 “It’s fantastic for farmers that we leverage other people’s money, yet we’re still in the driver’s seat and can make sure dairy is emphasized and more dairy becomes available to kids,” Donahoe said. “It’s a win-win for farmers.”

Donahoe said GENYOUth and Fuel Up to Play 60 also greatly incorporate farmers into events and programming. She and other farmers have participated at conferences and farm tours where students are likely meeting a dairy farmer for the first time. She said this is more important than ever with students becoming further disconnected from the true source of their food.

“I’ve seen firsthand how kids are like sponges and they love talking with a farmer,” Donahoe said. “They may get excited about a pro football player, but they get really excited about meeting a farmer.

“These kids have so much access to information, and sometimes it isn’t the right information, but they are smart and want the facts. We build a personal connection with kids, and it’s something they’ll never forget. This is what GENYOUth and Fuel Up to Play 60 are doing for us and for kids across the country.”

To learn more about your national dairy checkoff, visit U.S. Dairy or send a request to join our Dairy Checkoff Farmer Group on Facebook. To reach us directly, send an email to Talk To The Checkoff.