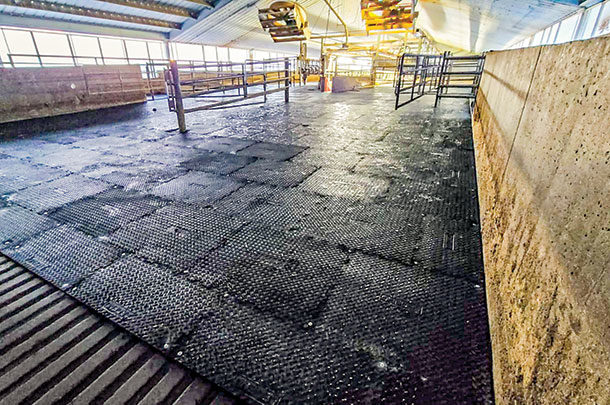 Audrey Schmitz
For people with jobs that require them to stand for long periods of time on hard floors or concrete, anti-fatigue mats are often placed at the feet of their workstation.
Audrey Schmitz

People experience less discomfort when they stand on these cushioned mats because the individual must frequently make small movements to compensate and maintain balance. The small movements increase blood flow in the lower body and cause the muscles there to tense and relax repeatedly and not be locked in one position for a long time.

At Eagle View Farms in Buhl, Idaho, similar rubber mats were recently re-installed in their cow deck and holding pen areas for cow comfort and to help prevent hoof issues.

“The idea is that the concrete can be tough on their feet, and if we can get them off the concrete and on something that is just a little softer on them, then it seems to make a difference,” co-owner Brad Visser says. “Our opinion is: The cows prefer the rubber over standing on concrete in areas that we do have it. They’re not much different than we are when it comes to standing up all day. You’d rather stand on something soft than [be] standing on something hard.”

Visser’s reasoning for replacing the rubber mats was because the old ones had become dated and worn out in the holding pen areas of two of his farms’ double-40 parallel barns that milk 2,500 Holstein cows each. The holding pens hold approximately 300 cows, and the cows are in the pens for no longer than an hour at a time and milked three times a day.

“I talked to Dustin Lickley at Progressive Dairy Services and Supplies in Wendell, Idaho. He had the mat there, and it was the kind he recommended,” Visser says. “They’ve been using it in a lot of places, and it’s got a little bit more traction on it than our old style of mat.”

Lickley says he has been pushing the rubber mats for several years, saying that their quality is excellent. They come with a five-year manufacturer warranty and cut to their specifications with a placement map.

“The Legend Agrimat is a 1-inch-thick interlocking mat with a checker plate top and studded base suitable for walkways, holding areas, cow decks and crossovers,” Lickley says. “The studded base allows for softness to provide the cows with more grip and traction. The interlocking pieces make for a seamless finish.”

The rubber mats benefit the cows by helping to increase traction and reduce slips and falls that, in turn, reduce lameness and hoof lesions.

“They allow the cows to have a normal step equaling that of being in the pasture,” Lickley says. “Cow comfort is a big area in order to keep cows healthy and comfortable, which equates to producing high-quality milk.”

For Visser, the installation process was pretty simple and straightforward.

“Progressive’s crew came out and removed the old stuff and installed the new ones,” Visser says.

For the installment process, Lickley took good measurements of the holding pen and cow deck areas that needed covering. He then sent a drawing to Legend Agrimats, who then figured out the square footage and sent back their drawing and quote for the project.

Lickley says installation times can vary depending on if he and Progressive’s crew have to take out existing mats or if they are starting fresh. He also says that the biggest challenge of installing the mats is working around the downtimes of the dairy, when cows are not in the holding pens for milking.

“This particular installation took about four days of downtimes with four technicians,” Lickley says. “These mats are pretty heavy-duty and require quite a bit of manpower. There can be quite a bit of cutting and trimming that can take place around posts, gates, stall v-walls and footbaths.”

“We have pride in taking care of the cows and making them comfortable and keeping them healthy,” Visser says. “If there’s one more thing we can do to take care of the cow and make her more comfortable, then we like to do that.”

Visser is a third-generation dairy farmer. His grandpa started dairying in southern California, where he originally grew up. When his dad, Jerry Visser, moved to Idaho 21 years ago, Visser and his brother Russell became partners in the dairies.

“Day-to-day, we kind of run the facilities separately, but overall, it’s all one company under one umbrella,” Visser says. “We still run stuff by each other for bigger day-to-day decisions, and large business decisions are made more as a group.”

Visser’s favorite thing about dairy farming is the variability in the work each day.

“There’s always different stuff going on and solving the problems that come up. It’s a unique business, I think, in that you’re not in just one aspect of it,” Visser says. “You work with cows, do repairs; you’re a plumber, carpenter or an electrician. There’s some stuff that’s always the same, but there’s some variability in the day-to-day work.”