In Focus: Will 2022 be the best year for dairy in over a decade?

Aidan Connolly
Dairy producers’ optimism noted at recent trade shows is matched by current projections for farm profitability in 2022, based on current predicted feed and milk prices. Following several years of tight margins, it seems that 2022 could be the most profitable in a decade.
Aidan Connolly

This prediction is supported by user data from Zisk, a downloadable free app that projects farm enterprise profitability. It has become the fastest-growing app for dairy producers. App users represent almost 3 million dairy cows from 2,100 U.S. dairies. As such, this group gives significant insights into the mood on U.S. farms today. The average producer visits the app 3.6 times a day. User-generated revenue projection data from this app hints at who will be profitable this year.

That milk prices are expected to continue to be bullish shouldn’t be a surprise, since U.S. exports are also strong. The decreased size of the U.S. dairy herd shouldn’t derail the ability of these markets to absorb further production. China, in particular, has been remarkable. The growth in consumption there is in no small part driven by the Chinese medical community’s assertion that consuming milk contributes to strong immune function and should be considered as part of a healthy diet and to “reduce the risks of COVID.” China doesn’t generally consume U.S. dairy products, but of course since their increased consumption represented 80% of the total global growth in dairy consumption, it is clear the importance they have directly and indirectly on U.S. milk prices. 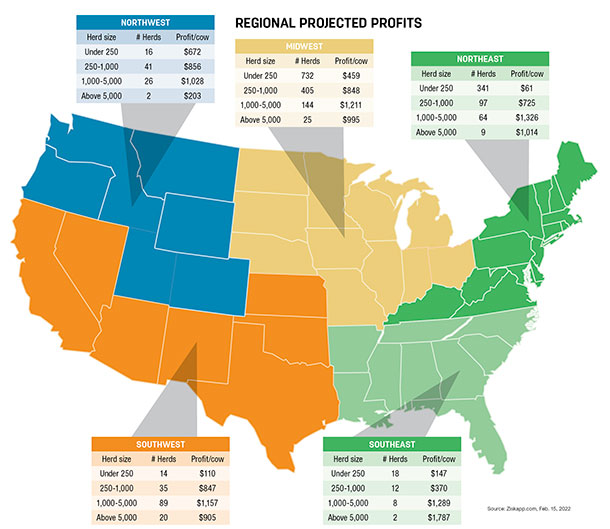 Producers in the Northwest and Northeast will be the most profitable in 2022, but farms with fewer than 1,000 cows won’t reap the benefits. More specifically, those with fewer than 250 cows will average $125 to $170 per cow in the two regions, respectively, while those with 1,000-plus cows should make about three to five times that level.

The least profitable dairy area will be the Southwest, with farms below 250 cows actually losing money. The Southeast is close behind. In both regions, farms with 250 to 1,000 cows will make about half the income per cow of neighbors with more than 1,000 cows.

Midwest Zisk users expect to be profitable, even for farms with smaller cow numbers, but even here producers with more than 1,000 cows should be seven times more profitable. According to the Zisk report, Missouri dairies will be the most profitable in the Midwest.

Southwestern producers will be a region with the greatest divergence in profits. Oklahoma and California dairies should do very well, but Arizona, New Mexico and Kansas can expect profits well below the national mean.

Northeast producers also show big differences in their expectations. New York and Pennsylvania have larger numbers of app users, and so their numbers are more representative of 2022. They expect profit per cow to be $480 and $518, respectively.

Except for Florida, the Southeast is expecting a difficult 2022. Milk producers in Mississippi, Arkansas, Louisiana, Tennessee and Alabama all project either margin profits or even losses on a per-cow basis. Georgia, North Carolina and South Carolina also all expect returns to be below the U.S. average.

Washington, Idaho, Colorado and Utah also expect strong profits in 2022, with only Oregon and Montana not showing projections as strong.

Overall, the Zisk app’s revenue projection that larger herds will be more profitable is in line with a trend nationwide toward larger farms. Dairies with more than 1,000 cows can expect to be considerably more profitable, while those with fewer than 250 cows considerably less, in fact five times lower than those with more than 1,000 cows. Even farms with 750 to 1,000 cows expect to be less profitable (25% to 30% lower) than the 1,000-plus-cow dairies.

Interestingly, the report doesn’t show significant additional benefits in 2022 for dairies with 2,500 or even 5,000 cows. Almost every economist or U.S. dairy management report demonstrates that larger dairies are the way of the future, and milk purchasers and processors are expecting the same. However, Zisk’s app data suggests that at least for 2022, having more than 1,000 cows is not critical.

One benefit of large and more profitable farms undoubtedly is the ability to invest in the farm and in innovation. The growth in the market for robotics, sensors, wearables, iOT devices, AI, camera vision and renewable energy generation on the farm through methane digesters favors those with scale. Thus, 2022 is shaping up to be the most profitable year in a decade for U.S. dairy farms and will provide the impetus for progressive dairies to use this year’s profit windfall to acquire neighboring farms, build larger new farms, embrace automation or prepare for challenges ahead.

Note: Data referenced in this article is provided by Zisk.

Aidan Connolly is the president of AgriTech Capital and former CEO of Cainthus. He is an author, speaker, teacher and commentator on the future of dairy and livestock agriculture.

AgriTech Capital LLC is based in North Carolina. Aidan Connolly is an adviser to, and investor in...
Email Aidan Connolly
TOPICS Progressive Dairy Dairy News InFocus