Kevin Bernhardt
With apologies to Benjamin Franklin, who said “The only two certainties in life are death and taxes,” dairy farmers can add cyclical highs and lows in milk prices and profitability to that list.
Kevin Bernhardt

Cyclical lows tend to be a time of greater anxiety for many and increased exit from the industry. However, even in cyclical lows, some farms are making profits. For these farms, it is also a time of opportunity as capital asset prices for machinery, land and cows are often lower as well. The question is: What do these successful farms look like at the end of cyclical highs that enable them to continue that success during cyclical lows?

To gain insight on this question, 180 Wisconsin dairy farms were assessed for the years 2014-18 (red shaded section in Figure 1). 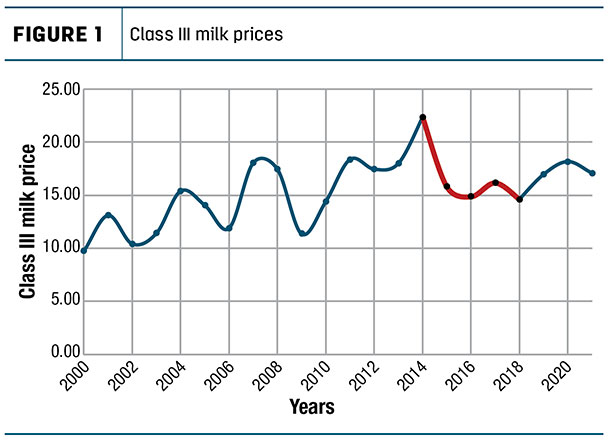 Year 2014 was the end of a cyclical high, followed by four years of cyclical-low prices and profitability ending in 2018. 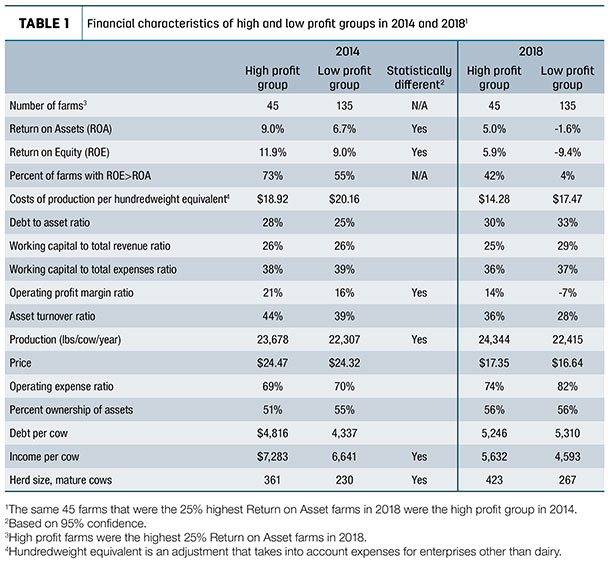 All others are referred to as the “low-profit group.” The assumption was that farms with the highest profitability coming out of a low in the profit cycle did something right during the high in the cycle to prepare their operation. What did the high-profit group look like at the end of 2014 that prepared them for continued success in the low years that followed?

Virtually everyone made money in the cyclical-high year of 2014. Of the 180 farms studied, 172, or 96%, had positive ROA in 2014. However, only 87 (48%) had positive returns in 2018. So the question is: What was significantly different between the high- and low-profit groups coming out of the high year of 2014? Was it the amount of debt, working capital, price, costs of production or herd size?

Note, “significant” has a special meaning in statistics. It means that after considering the number of observations, average and variation around the average, it can be said with 95% confidence the averages are different.

While virtually all 180 farms were profitable in the cyclical-high year of 2014, the high-profit group was significantly more profitable, with a ROA of 9% versus 6.7% for the low-profit group.

The additional profitability perhaps provided the tailwind going into the low years. More importantly, it may have been the management practices that led to the higher ROA that made the difference.

ROA comes first from creating revenues from assets (measured by the asset turnover ratio) and second, being efficient with expenses (measured by the operating profit margin ratio). In 2014, the asset turnover ratio was not different, indicating both groups know how to work their assets (cows, land, etc.) to create gross revenues. However, the operating profit margin ratio was significantly different, indicating high-profit farms were more efficient.

Efficiency can come from producing the same amount of product but at a lower cost, producing more product at the same cost or both. Pounds of production per cow was significantly higher for the high-profit group (+1,371 more pounds per cow per year). This difference, itself, is not staggering, but the high-profit farms produced the extra milk with the same or lower costs, resulting in $240 more net operating profit per cow. For 200 cows, that’s $48,000 additional net profits for that year. This difference was also seen in the significantly lower costs of production per hundredweight equivalent ($1.24 less for the high-profit group).

Another source of profitability is price. However, price was not significantly different between the two groups. This is not a surprise, as all farms in this study were commodity farms and therefore price takers. Price differences can result from discounts, premiums and marketing, but those were not enough overall to create a difference in prices between the two groups.

What was not different?

One could assume high-profit farms would have less debt and more working capital. However, neither of these metrics were significantly different. That said, how the debt was used may be the bigger story.

Coming out of the cyclical-high year of 2014, 73% and 55% of high- and low-profit farms, respectively, had a ROE greater than ROA. That means debt was being used on all farms to leverage greater profitability, but more so for the high-profit farms. However, after prices fell, it was much harder to have profit returns greater than the interest paid. In 2018, after four years of low prices, 42% of high-profit farms still were leveraging debt for higher returns, but only 4% of low-profit farms had the same. This indicates that while the level of debt was not different, how debt was managed and used may be a unique difference for those farms that did well even in cyclical lows.

When milk prices are depressed, prices of capital assets such as cows, land, machinery, etc., sometimes level out or even fall. Thus, for those businesses that have dollars to invest, there may be opportunities. While all farms on average grew in cows, acres and total asset value, the high-profit group grew faster during the cyclical-low years by 19%, 82% and 17%, respectively, for herd size, acres owned and total assets.

Research results often confirm the common sense we already knew. Results indicate the farms that not only survive but thrive and grow during cyclical lows are those that run a tight ship. They have greater cost efficiencies and higher production. Further, they manage debt in ways that return greater profits than the interest they pay. As a result, they can take advantage of opportunities and grow the business.

What does it all mean for what to do tomorrow after breakfast to prepare for the next cyclical low? Where can I lower costs without harming production? Where can I increase production with the same or lower costs? Is my debt financing being used in ways that return a profit higher than the interest I pay and would still be higher even if prices fall? If debt is not expected to leverage into greater profitability, then can I use cyclical-high profits to pay off deadweight debt?

It may seem counterintuitive, but perhaps the best time to focus on running a tight ship is during the good times so the business is ready to capitalize during cyclical lows.