Methane is the second-leading driver of climate change, having contributed 0.5 degree of the 1.1 degrees of human-induced warming since pre-industrial times, according to the latest assessment by the U.N.’s Intergovernmental Panel on Climate Change.

A 0.3% reduction per year in methane is equivalent to net zero for carbon dioxide. If this level of reduction could be achieved, there would be no additional warming. As an outcome of COP26, as many as 104 countries, including the U.S. and Canada, have pledged to cut global methane emissions by 30% in less than a decade.

Approximately 14.5% of all greenhouse gases (GHGs) produced globally by human activity is associated with livestock production, which includes emissions from animals, manure, feed production and expansion of lands into forested areas. In the U.S. and Canada, the record is a bit better, and all agricultural activities contribute approximately 10% of the total human-produced GHG. The rest of the human-made greenhouse gas is from transportation, electricity production, industry, homes and businesses. 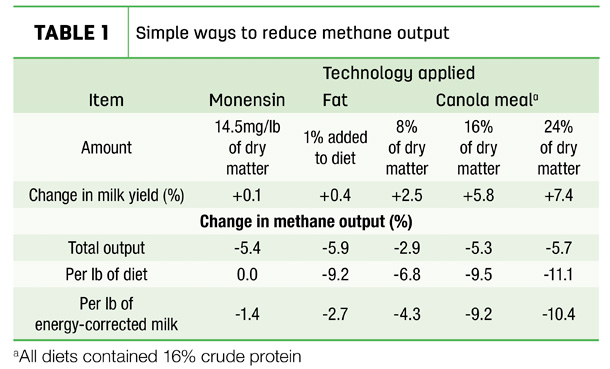 While the contribution to GHG from animal agriculture represents a small portion of the total, it is important. Most of the non-animal- related GHG is in the form of carbon dioxide. Animal production, however, produces mostly methane and some nitrous oxide. Enteric methane from ruminants contributes approximately 6% of global human-induced GHG emissions. Reducing methane provides the greatest opportunity to mitigate and possibly reverse global warming.

In addition, methane represents a loss in energy to the animal. Reducing methane output allows more energy to be retained and be put to better use in the production of meat and milk. And the place to start is with ruminant animals, such as dairy cows, beef cattle and sheep.

There is potential for mitigating enteric methane emissions through a variety of approaches. Examples include a focus on the use of feed additives, dietary ingredient manipulation and forage quality, to either modify the rumen environment or directly inhibit methanogenesis, resulting in lower enteric methane production.

There are several feed additives that can be used. Some quite new ones offer promise. An older technology involves the use of ionophores. According to researchers from the University of Guelph, monensin (an ionophoric antibiotic) consistently reduced methane by a small amount.

While cows mainly contribute to GHG emissions via methane, nitrous oxide, which is more environmentally toxic than methane, is produced and released from protein breakdown products lost in urine (urea and ammonia). Improving protein efficiency by not overfeeding protein and providing proteins with a good amino acid balance can reduce nitrous oxide production while often saving costs.

Modest changes in diet formulation can be beneficial to the environment. Importantly, the changes may also improve milk production. Environmental stewardship can be a profitable proposition.