Dave Natzke
Stronger milk prices and margins and a shrinking cow and heifer supply likely contributed to a slight uptick in U.S. average prices for dairy replacement cows in January, according to latest estimates from the USDA.
Dave Natzke

The USDA estimates are based on quarterly surveys (January, April, July and October) of dairy farmers in 24 major dairy states, as well as an annual survey (February) in all states. The prices reflect those paid or received for cows that have had at least one calf and are sold for replacement purposes, not as cull cows. The report does not summarize auction market prices.

Compared to the previous quarter, average replacement cow prices were up in 18 of 24 major dairy states tracked by the USDA (Table 1). Prices were down in four states and unchanged in two others. The largest quarterly increases were in Oregon, up $150 per head, and Pennsylvania, up $90 per head. In contrast, average prices were down $50 in New Mexico and Utah.

Compared to a year earlier, January 2022 replacement cow prices were up $100 or more in Colorado, Oregon, Pennsylvania, Vermont and Virginia, but $20-$30 lower in California and Georgia. 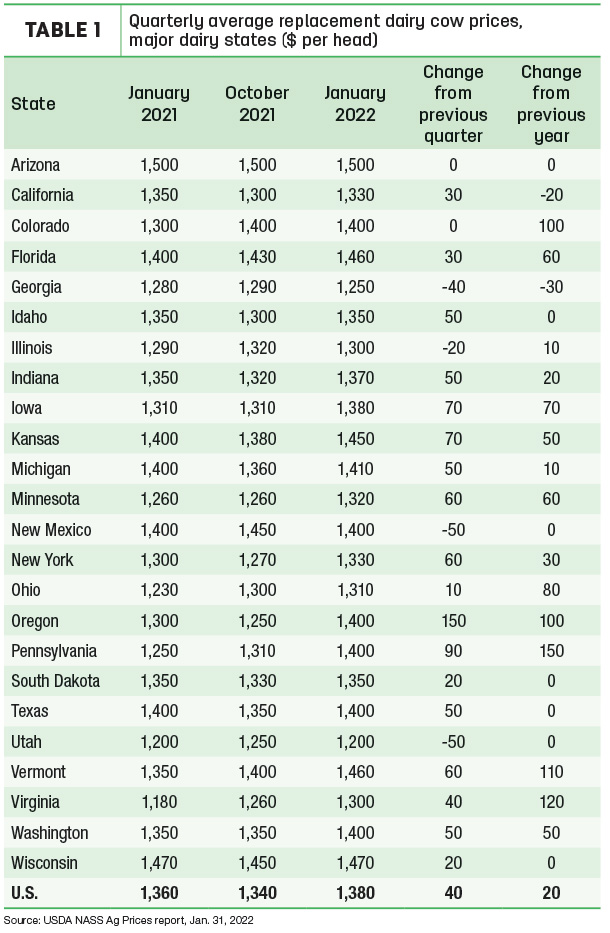 When overlaid on USDA Milk Production reports, changes in average replacement prices were again weakly correlated with trends in cow numbers in indidual states. The major states saw dairy cow numbers drop by about 42,000 between December 2020 and 2021 (the latest estimates available), with largest declines in New Mexico and Washington. As of December, U.S. cow numbers were down 132,000 head since peaking in May 2021 and were the lowest since December 2020.

After setting a quarter-century high in 2021, the USDA’s semiannual estimate of cattle inventories indicates there were fewer dairy cows and replacement heifers to start the new year.

Looking at potential replacements, there were about 4.450.6 million dairy heifers weighing 500 pounds or more, down 157,900 from a year earlier and the lowest number to start a year since 2009. That averages out to be about 47.5 heifers per 100 cows, the smallest ratio since 2009.

The inventories are based on data compiled by the USDA from about 34,800 dairy and beef operations during the first half of January.

(Detailed statistical analysis of state and national dairy herds and milk production will be featured in the April 1, 2022, issue of Progressive Dairy.)

Drought and higher feed costs drove beef and dairy cow culling rates higher for most of the second half of the year, and U.S. annual dairy cull cow slaughter was estimated at 3.1 million head in 2021, about 42,700 head more than 2020 and the fourth consecutive year above 3 million.