Offer feedback to ensure your team is on track

Kathleen Redmond
The truth is: One of the best ways to help employees thrive is to offer them feedback. It’s one of the most important tools leaders have to increase a sense of motivation and engagement.
Kathleen Redmond

Offering your team regular positive feedback on their work helps them feel valued. Constructive or feedforward information provides insights into your perspective, development and support for your team.

Recognition has been proven to increase happiness at work in general and is linked to concrete results, such as job satisfaction and retention.

In the last 30 years, I have worked with thousands of leaders by coaching and facilitating workshops. Offering positive feedback is always included in our conversations in building teams. The absolute majority of leaders admit they do not receive adequate recognition from their own leader – and yet, when asked for the barriers in recognizing their own team members, there are immediate and ample reasons for not doing what they know to be effective.

The following are reasons for not recognizing team members:

Here is what we know to be true:

Now let’s explore the other side of the coin: constructive feedback when dealing with work that can be done better.

“Supporting the truth, even when it is unpopular, shows the capacity for honesty and integrity,” says Steve Brunkhorst, author of Achieve!

Here is a typical situation I often hear as a coach: Just talking about working with Stan creates anxiety for Paula. In a coaching session with me, Paula expresses her frustration. “He just never does what he is supposed to do. His work consistently hovers around the line of minimal contribution: never strong enough to really make a difference and never terrible enough to let him go. His attitude really irritates me; he gets under my skin.”

As Paula’s coach, my role is to clarify her confusion and help her develop and implement solutions. “What has he been told regarding his performance?” I ask her.

“It is hard to talk to him; he is immediately either on the defensive or the offensive. I have basically given up and just ignore him. It is too frustrating. I would rather just find some other way to get the work done,” Paula responds.

Another manager succumbs to the angst of holding people accountable.

On countless occasions in management training and coaching sessions over the past many years, I’ve listened to managers such as Paula describe the angst of confronting employees about poor performance. Actually, what I hear is their rationalizations for their reluctance to deal with what is undoubtedly a challenging and sometimes painful management responsibility.

The following are reasons for not dealing with employee performance issues:

The truth is: The people who work hard want you, as a leader, to deal with people who don’t do their fair share. It is “disengaging” to observe that there is no consequence for poor performers, and your workplace will be affected by your reluctance to deal with difficult issues.

You, as manager, are responsible for 50% of the equation. When you are clear, specific, consistent, provide resources, training and ongoing feedback, you are doing your part. The employee is also responsible for 50%, to clarify anything that is vague, to track his own performance, to apply her skills and keep you apprised of barriers and issues that arise along the way. When people know what is expected, they have a choice to make – either do the work, as required, or don’t. Either way, there should be a consequence of their decision.

Feedback when a performance gap exists has many names: feedback for improvement, developmental feedback, constructive criticism and problem-solving feedback. Whatever you call it, there are certain key elements. Do your homework, have all the facts and information available and ensure the support of your boss, if you have one. Hold the discussion privately, without interruption and with ample time. Clarify your objective. What are you really trying to achieve? What is the best possible outcome of this conversation? Remember this is a two-way discussion and substitute curiosity for assumptions regarding the other side of the story.

Start the conversation neutrally without accusation. Engage the person in the discussion as soon as possible. Explore all reasons for non-performance. Listen well; don’t rush this conversation. Work toward a solution that is balanced and achievable. Establish realistic timelines. Ask the person to follow up with you. Both of you should document the discussion.

A model to follow for a constructive feedback conversation is shown in Table 2. 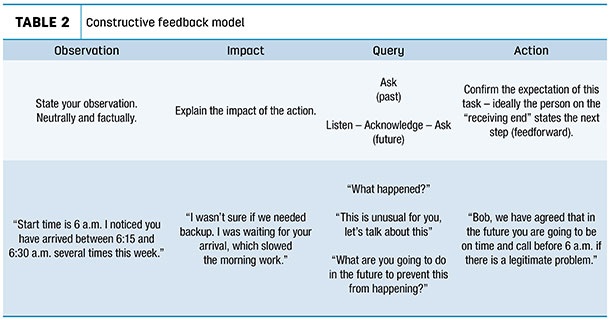 You will see the results of offering your team specific, authentic, timely and generous positive feedback. Confronting issues in an honest manner is a complex, challenging task, but dealing with performance issues proactively, consistently and objectively has its own rewards. Feelings of angst will be replaced by those of satisfaction.