Rich Stup with Cornell Extension Agricultural Workforce Development shared results of an employee survey during a Pennsylvania Center for Dairy Excellence (CDE) webinar series, “Transforming Your Team: Employee Communications and Management.” Based on that survey, almost all employees said they not only appreciate feedback, but they want more of it.

As a team or business leader, feedback is more than correcting someone when they are wrong. According to Stup, positive feedback is the most under-used form of feedback for farms and businesses.

When it comes to giving feedback, your goal should be to provide employees with information and observations about their performance to help them take their abilities to the next level. Stup shared four types of performance feedback and discussed how each type has different impacts on your team.

1. Positive feedback is almost always under-used by employers, especially in the dairy industry, where employees or family members might have a long employment history with the farm.

“When we’re recognizing positive performance and appreciating people for that, it makes our place of work better for everyone. Reinforcing correct behavior is the power [of this type of feedback],” Stup said. “Even if the person has been doing it for years, we always want to be repeating and praising that positive behavior. As long as it’s genuine and not forced, the employee is going to appreciate it.”

2. If you have a positive performer who you’re looking to get back on track, or make minor adjustments to their performance, redirection is another type of feedback that provides encouragement. Redirection should not be viewed as punishment, Stup said.

“Redirection can help them take it from one level to the next and help them be better. It’s often used when someone has gotten a little off track such as getting sloppy with procedures on the farm,” Stup explained.

3. Negative feedback or punishment, on the other hand, is a direct strategy to stop undesirable or harmful behavior. Stup encouraged team leaders to use negative feedback only with employees who have knowingly wrong behavior. He advised against using punishment on a new employee who is still learning the protocols on your farm and may not be aware they are making a mistake.

“To punish someone who is just learning can be entirely demotivating. They often can’t learn much because they’re getting punished and aren’t even sure why,” Stup said.

4. The fourth type of feedback, and the type that Stup says is most common on farms and businesses today, is ignoring behavior altogether. While managers shouldn’t feel the need to coach or provide feedback to a new employee on every single step, it’s important to find the delicate balance of letting employees learn independently while giving enough feedback to show you care about their day-to-day performance.

“People are performing regularly, and we unconsciously forget to give feedback. We’re busy as supervisors, and we just don’t give feedback the way we should,” Stup said. “But ignoring says the job your employee is doing isn’t important. It can also say, ‘I don’t care about your job, whether you’re doing well or not.’”

How to deliver feedback

If you want to provide more feedback and coaching, it helps to be transparent with your team, Stup said.

“It doesn’t have to be a secret. Tell your employees you’re trying to do a better job at giving feedback. Tell them what you’re doing and that you want to be more engaged to help them do better,” he said.

“There’s going to be a period of awkwardness at the beginning, as your employees wonder why you are coming to them and saying these things,” he explained. “Get through it and stick with it until it becomes normal.”

The goal is for feedback to be a two-way conversation where employees are engaged in the discussion and offer insight on their behavior. The more feedback becomes a habit, the less uncomfortable it will feel when delivering it.

Stup referenced the SCORE method (see Table 1) and shared tips for delivering performance feedback in a way that resonates with farm employees: 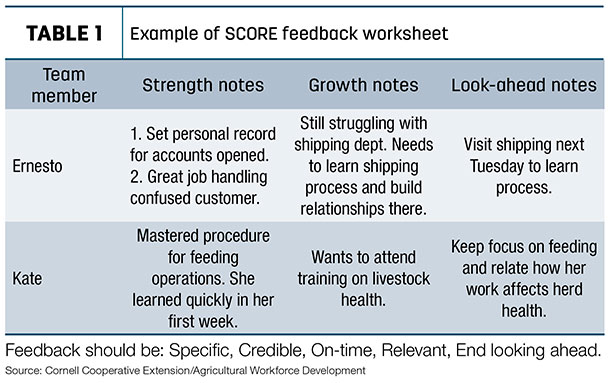 S – Specific. Be specific with details. Focus on behaviors and tasks that can be named, and make sure to include specifics in your feedback instead of relying on vague phrases like “good job.” “You did a good job cleaning that equipment today. Thanks for doing such careful work,” is one example Stup provided.

C – Credible. Offer credible sources of information. To be credible when delivering feedback, you must be present in the workplace to see what’s happening. You must understand the work enough to recognize good and bad performance.

“If you’re in a position where you supervise something you’re not an expert on, you don’t have to be the expert, but you at least need to know the basics. You have to be credible to be able to give helpful, specific feedback,” Stup said.

“Feedback won’t be as effective a week later [as] it would be right after you observe the performance. Feedback gets stale over time,” Stup said.

“If you have an employee who is doing a great job performing and hitting the numbers, but they’re always attacking other people, you should give feedback on that – even if performance is great,” Stup explained. “Teamwork and attitude-related issues should be the number one focus. A supervisor’s responsibility is to deal with that immediately.”

E – Ending. Always end with a forward-thinking outlook on how your employee can get to the next level. Feedback is about improving future performance. How can they do better next time?

In addition to providing feedback, these informal conversations with employees should involve coaching. Help them identify their goals, discuss their obstacles and brainstorm the way forward. The whole point is to engage them in an interactive discussion, helping them take some positive steps rather than sitting there feeling stuck.

“Coaching and regular feedback shows your confidence in the employee and builds trust in the relationship. You’re planning together,” Stup added. “Make sure to follow up and check employees’ progress over time to demonstrate your interest in their development.”

Emily Barge is a communications and marketing manager with Pennsylvania’s Center for Dairy Excellence (CDE).