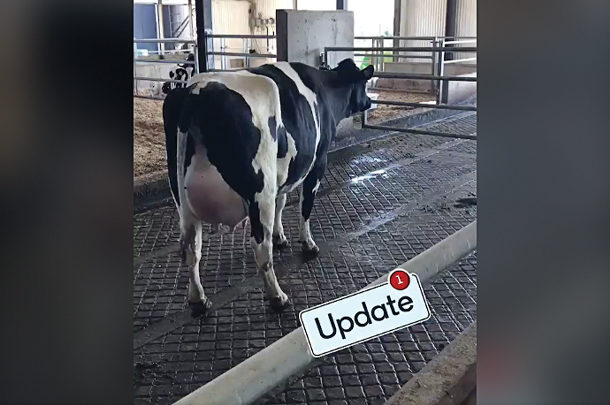 “How do we get these heifers to 12,000 kilograms by 305 days? Our mature cows are making almost 14,000 kilograms, so shouldn’t we be able to achieve 12,000 kilograms in first lactation?” This was the question posed to me, the nutritionist, by a progressive dairy client as we met back in July 2020. We pondered several ideas, such as boosting the first-lactation diet in energy and protein, feeding soyhulls, altering the haylage-to-corn silage ration. But we also decided to look at the area of transition heifer practices.

Minimizing stress during the transition period of heifers is paramount. Dairy managers and researchers are often concerned that pre-fresh heifers experience too many diet and pen changes around parturition. On this dairy, over the course of three months, they moved from a bred heifer diet to a close-up diet, to a fresh diet and finally to a high-density, first-lactation diet. Our thought was: Fundamentally, this is too much change.

Research has been limited in the area of prepartum first-lactation grouping strategies. Pen changes have been linked to more bouts of aggression as social hierarchies are renegotiated. This disruption is more exaggerated when mature cows and first-lactation cows are grouped together. However, the pen design, volume of living space, ease of feed access and pen change practices all play a role.

Dairy managers currently use a number of practices to reduce stress and optimize intake. Freestall pens should have a cross alley on each end to allow circular flow, and this also serves as an escape route for less dominant cows. Stocking densities of 85% or lower have been shown to enhance feed intake, in addition to feedbunk space exceeding 18 inches per cow. Feeding twice daily, along with frequent feed push-ups every two hours, has also proven to benefit intake.

Fresh diets are commonly fed the first 21 days of lactation on many operations and serves to bridge the energy and fibre gap of the dry cow diet and the high-lactation diet. They are often higher in protein, energy, sodium and potassium compared to a traditional DCAD-balanced dry cow diet. Research is limited on prepartum heifer diets, though it’s been established that heifers have a higher protein requirement than mature cows. Freshening heifers are also prone to less milk fever compared to older cows, but research shows it can still occur subclinically.

Between the manager and I, we had a good understanding of the research, an appreciation for cow behaviour, a little fear of the unknown but a hunger to improve first-lactation performance. To the manager, I said, “What if we move the bred heifers onto the fresh diet three weeks prepartum and group them exclusively with bred heifers? After all, they will experience two less stressors – one less diet change and being grouped on their own away from mature cows.” With little hesitation but an appreciation of the risks, the trial began the day after our July meeting. Shortly after, I was able to find one other high-production dairy to conduct the same trial.

Rather than stuffing springing heifers into the mature prepartum dry cow pen for the final month of gestation, we placed these cows into a separate pen and fed them the “fresh lactation” diet. Normally, these springing heifers were fed the close-up diet containing anions or calcium binders, but we wanted to observe how these heifers calved and performed on the fresh diet.

In September 2020, the concept was written and posted on my LinkedIn page in order to gain feedback from the global dairy community. After thousands of post views and several pages of comments, the post provided plenty of feedback – both positive and negative. Most importantly, though, it exposed a number of farms globally that already tried this concept and had great success. Filip Jamart, an international dairy consultant from Belgium, conducted the same approach on 2,000 heifers with success. Several other followers, such as Canadian hoof health consultant Jamie Sullivan, supported the philosophy of reducing diet changes and keeping heifers in separate pens away from mature cows.

The post exposed a group of followers fundamentally concerned about feeding the fresh diet to prepartum heifers. Increased udder edema, overfeeding of protein and higher risk of hypocalcemia and ketosis were the main points raised. Overall, the post engaged a large swath of global dairy experts, and the comments instilled confidence but raised “red flags” as we continued the trial.

Six months into the trial, here is what we had learned:

Other things to consider before trying this concept:

As we approach one year of results, the decision will be made to carry forward, tweak or consider other concepts in managing transition heifers. More research is definitely needed in the area of transition management of heifers, considering the feedback from the dairy community on LinkedIn.

For certain, minimizing changes such as diet and pen movements in transition heifers will lead to better intake, well-being and reproduction. Taking an open-minded look at your farm’s situation may reveal some areas of focus for the remainder of 2021.