What can we learn from a social media-ignited conversation like Buttergate?

A simple conversation sparked online about the hardening of butter evoked powerful reactions we can learn from and use to prepare for the next time.

The question itself – about the hardening of butter – was ignited by a consumer tweet late in December 2020 that ultimately engaged thousands of butter-enthusiastic Canadians.

The conversation, which was marked by the hashtag Buttergate, brought to light the many factors involved in a debatable topic like this: the players involved and the different communication styles used, how the topic transpired so quickly and how social media was activated and utilized in this instance, opinion versus science and the apparent lack of information, the difference of opinions and the emotions and reaction of those involved and, of course, the implications that were a result of how the conversation ultimately landed.

Buttergate could have proven to be a communications and marketing opportunity to engage with Canadian consumers about our Canadian dairy industry and their butter – something they were clearly so passionate about since being at home more due to COVID-19, which was reflective in retail butter sales which rose 12.4% in 2020, according to Dairy Farmers of Canada (DFC).

It is a social media example of a complex issue that needed to be quickly simplified for the Canadian consumers who were watching it unfold online and were seeking an answer to their question. The situation swiftly transpired into a quickly evolving debate, formed more on thoughts and opinions, that ultimately resulted in DFC asking Canadian dairy farmers to consider using alternatives to palm supplements for those farmers who were using it.

Put yourself in the shoes of the consumer: How would you have formed an opinion on why your butter was hardening?

When we reflect on the timeline of events (as outlined in Figure 1), we see how things unfolded, the reaction from those involved, the lessons learned and takeaways for the next time. 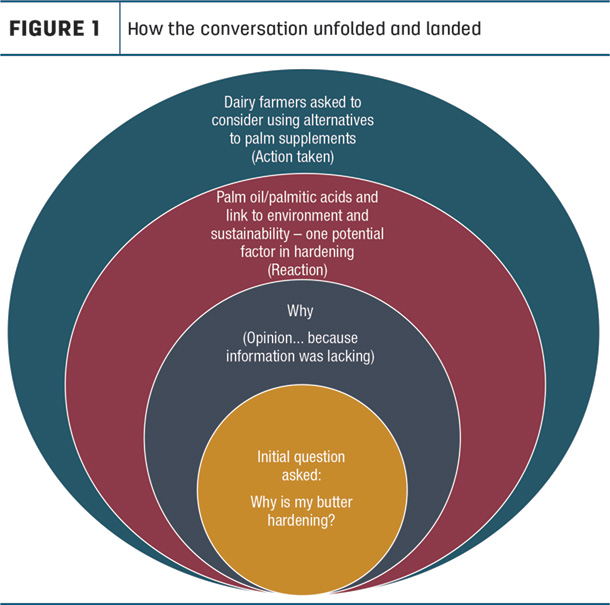 This will need to be a communications example studied in-depth; however, there are 10 areas we can focus our energy on right away:

1. Accept that the consumer is always right. In the court of public opinion, the public wins. Always. If they are asking questions, especially when they’re already supporting the product at hand, we should be readily available to answer them and not worry about whether the question is the right one or wrong one to be asking. Ensuring they have the answers to their questions, or at least feel like we’re on the journey with them in helping to find answers, is key to keeping consumers loyal.

3. Be responsible communicators. Know how to show up in a professional manner and when to take back the narrative to the initial target audience (the consumer) and spend our energy there in a non-combative, “let’s-work-together-to-find-the-answers” type of way.

4. Craft one, strong narrative with supporting key messages quickly and articulate this narrative by the masses in numbers. Who was missing earlier on in this conversation when we needed them most? Our dairy farmers – and Canadians trust our farmers as the number one source when it comes to their food, according to research shown in the Canadian Centre for Food Integrity’s 2020 Public Trust Research Report (Figure 2). 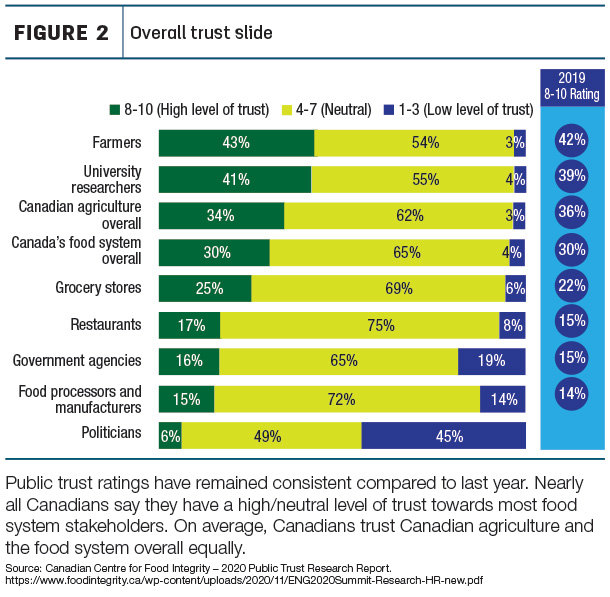 Farmers could have been utilized earlier on in the conversation and are the trusted voice our consumers most likely wanted to hear from.

5. Influencers are trusted sources of information. When it comes to who consumers trust, consumers listen to influencers, and the notable dairy farmer influencers the Canadian dairy industry has across Canada are the people to utilize in times like these. These are dairy farmer influencers who have cultivated incredible communities of thousands of loyal followers and fans. We need to leverage these farmers and farmers like yourself, who local neighbours and community members trust and turn to when they have questions. Having a plan of action in how we could “activate” farmers across Canada in a united way with a singular message on social media is a good crisis management strategy.

6. Anticipate what consumers are thinking and feeling – and address these things proactively. The information that was missing to answer the most obvious questions I, like most consumers, had about the topic would show the industry has nothing to hide when it comes to how we dairy farm in Canada. Proactively addressing what needs to be said and saying it out loud before consumers ask is key in communicating.

7. Have a list of credible resources readily available to point both farmers and consumers to the different perspectives, opinions and research available. Our farmers would feel better equipped to answer questions, and consumers would feel like they have a trusted source to answer their questions if they were provided with information that shows a balanced perspective and allows them to make the final decision in their journey to an opinion on the matter.

8. Things transpire more quickly than we anticipate on social media – that is how the funnel works or the machine that is social media. In this case, mainstream media picked up the story because of how it was resonating with people on social media first. There is limited time to react to situations like this, but decisions need to be made swiftly and posted on social media for those involved to see that decisions and actions are being taken. Most importantly, engaging on social media with the consumers interested and showing we’re willing to have a “two-way conversation” with them as the issue is unfolding is imperative.

9. How we react to a situation can speak louder than the initial situation at hand. In this case, how our farmers, our industry professionals and those involved in the Buttergate conversation conducted themselves on social media, both good and bad, spoke volumes about the character of the industry. It was an issue that garnered emotion from the best of us, but knowing when to appear rational, choosing our words wisely, not attacking and knowing when to step away from Twitter is something we need to employ more. Consumers are watching at all times – what impression do we want to leave with them?

10. Social media training isn’t an option, it is an absolute necessity. Seeing how quickly a communications example like Buttergate can lead to policy implications for farmers, organizations and industries speaks to the power of social media and how adequately equipped our executives, leadership teams, board of directors, staff and farmers need to be in a space that is now dictating how we do business. Just like so many of the other things we train ourselves in, in business and farming, we must ensure we are social media-trained if we are going to actively use it both in personal and professional ways.

What can we ultimately learn from Buttergate?

Accept the powerful role of social media in driving these types of conversations that will continue to take place in our consumer-driven world. Always put yourself in the shoes of the consumer because they are ultimately who we need to reassure to keep the lights on and keep us in business.

Click here to see the timeline of events that took place from December to early March.