Based on quarterly lender surveys in major agricultural Federal Reserve districts, interest rates on all agricultural loans rose in the third quarter of 2022.

The Federal Reserve’s Open Market Committee (FMOC) adjusted its benchmark lending rate up another 75 basis points in early November, boosting the rate in a range of 3.75% to 4%, the highest in 15 years. The sixth rate hike this year, agricultural lenders have increased rates alongside the historically sharp rise in the federal funds rate. 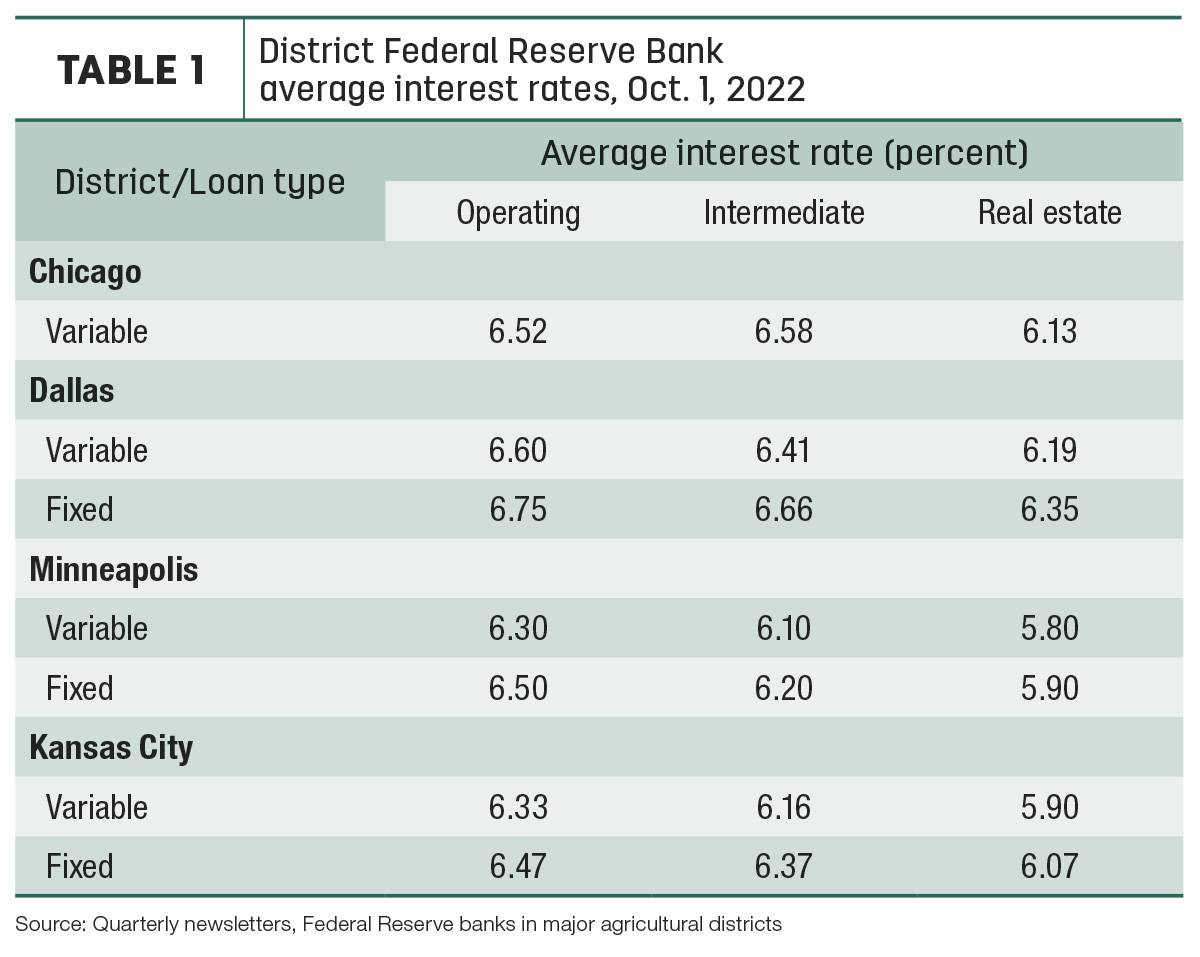 Based on quarterly lender surveys from Chicago, Dallas, Kansas City and Minneapolis Federal Reserve districts, interest rates on all agricultural loans rose in the third quarter of 2022 (Table 1).

Interest rates on all variable-rate loans were up about 1% from the previous quarter and are the highest in more than a dozen years.

While net cash earnings (which include government pay­ments) for crop, hog and beef producers were expected to be up during the fall and winter from their levels of a year earlier, the district’s dairy industry was expected to do less well, with 17% of responding bankers forecasting higher net cash earnings for dairy farmers over the next three to six months relative to a year earlier and 20% forecasting lower such earnings.

Interest rates on variable and fixed loans were up 0.75% to 0.9% from the previous quarter and are the highest since the second half of 2019. Demand for agricultural loans decreased for the third consecutive quarter in third quarter 2022. Loan renewals or extensions fell for the seventh quarter in a row; loan volume decreased for all categories compared with a year ago.

Interest rates on farm loans increased sharply in the third quarter. Variable and fixed rates on all types of loans were about 75 and 65 basis points higher than the quarter, respectively.

About two-thirds of survey respondents in the district indicated that higher interest rates had a negative effect on financial conditions for borrowers, with about one-third reporting a significant negative effect.

At the same time, collateral requirements increased at a slightly faster pace than recent quarters, and renewal and extension activity moderated following more than a year of declines. The impact could be more pronounced for operations with higher debt needs.

While strong agricultural prices continued to support the farm economy, the rapid rise in production expenses could pressure profit margins and has shown initial signs of pushing demand for financing higher. Larger-sized operating loans continued to boost farm lending activity, according to Nate Kauffman and Ty Kreitman, economists with the Kansas City district.

Interest rates for all loan categories continued to increase, with largest increases for operating loans. Collateral requirements on loans were unchanged according to a vast majority of lenders surveyed. Respondents continued to report concerns about inflation and soaring input costs.

In a statement, Jerome Powell, chair of the Federal Reserve, suggested that it would begin to take a more deliberate approach to rate hikes, likely leading to smaller increases in borrowing costs when it meets again, Dec. 14-15.