Compared to a year earlier, March milk prices were up $3.50 per cwt in Florida and $3 per cwt in Utah. 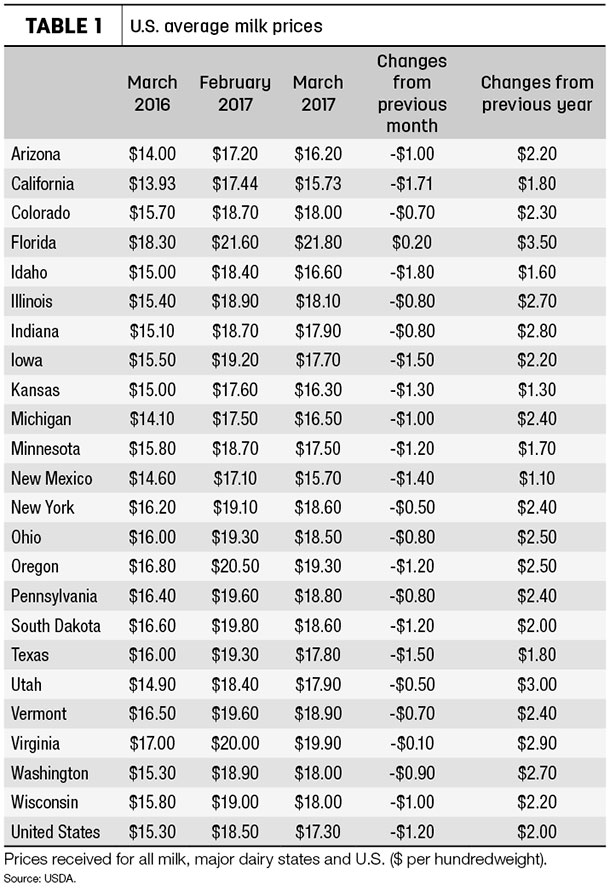 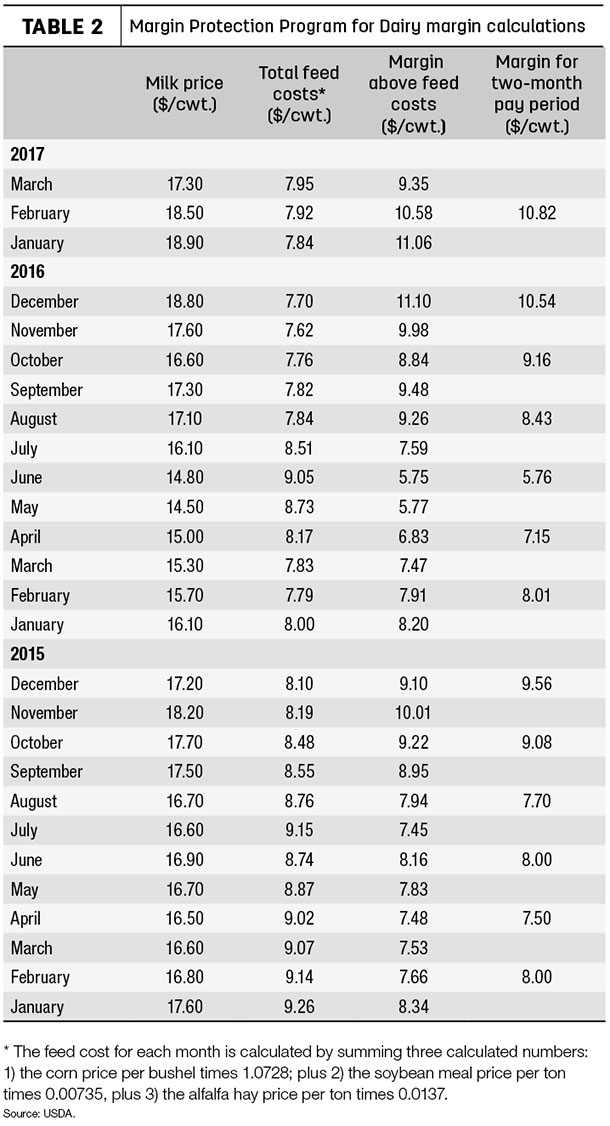 Subtracted from the March average milk price of $17.30 per cwt left an MPP-Dairy income margin of $9.35 per cwt., well above the top payment trigger of $8 per cwt. The March MPP-Dairy calculations are the first half of two-month factors used to determine potential payments for the March-April pay period. As of April 28, the Program on Dairy Markets and Policy forecast an April margin of about $8.50 per cwt, meaning a March-April indemnity payment is unlikely. The actual two-month margin will be announced May 31.

As of April 26, 2017 Class III milk futures prices averaged $16.22 per cwt, with Class IV milk futures at $14.93 per cwt. Adding current feed prices, the MPP-Dairy margin for the remainder of 2017 was projected at $9.49 per cwt. On a quarterly basis, the MPP-Dairy margin was forecast at about $8.77 per cwt for the second quarter of 2017, improving to $9.32 per cwt in the third quarter and $9.89 per cwt in the fourth quarter. Although conditions can change, it appears unlikely there will be MPP-Dairy indemnity payments through the end of the year.

The latest sales period for LGM-Dairy margin insurance coverage was held April 28-29 and is now closed. The sales period offered coverage for June 2017 through March 2018.

Based on conditions as of April 26, the insurable 10-month LGM-Dairy margin averaged $8.09 per cwt, Zepp said. The cost of a zero-deductible LGM-Dairy policy for the 10-month period was 62 cents per cwt, with a $1 deductible policy costing about 16 cents per cwt. The next LGM-Dairy policy sales period set for May 26-27. Zepp forecasts LGM-Dairy program will provide indemnity payments going forward in 2017 if milk prices remain stagnant. A reminder: By law, producers already enrolled in MPP-Dairy can’t participate in LGM-Dairy.

For producers using the futures market individually or through their co-op, the July 2017 Class III CME futures price closed at $15.89 per cwt as of April 26. A $16 per cwt “put” was trading at 61 cents per cwt, with a $15 put (equal to the $1 deducible LGM-Dairy policy) costing 21 cents per cwt.

U.S. cow numbers and milk production continue to increase, Zepp said. Dairy product inventories remain at historically high levels in the U.S. and around the world. World demand for dairy products appears to be steady. U.S. dairy product prices are near the world prices, making them competitive on export markets.

Dairy margins deteriorated over the first half of April, but grew slightly stronger to end the month due primarily to a small recovery in milk prices as feed costs held mostly steady, according to Commodity & Ingredient Hedging LLC. Margins remain positive and above average through the first quarter of 2018, offering dairy farmers opportunities to protect breakeven levels with flexible strategies that will allow for further margin improvement over time.

Milk prices have recovered despite a continued build in both production and dairy product stocks as the market works through the spring flush. Feed costs didn’t register much movement over the last two weeks of April, although recent wet weather – which has slowed corn planting across the Midwest – did lead to a round of commodity fund short covering.

Replacement cow prices up a little

Although the increase was small, it marked the first quarter-to-quarter price increase in nearly two years. National average replacement cow prices had peaked at $2,120 per head in October 2014.

The USDA estimates are based on quarterly surveys (January, April, July and October) of dairy farmers in 23 major dairy states, as well as an annual survey (February) in all states, according to Mike Miller, with USDA’s National Ag Statistics Service. The prices reflect those paid or received for cows that have had at least one calf and are sold for replacement purposes, not as cull cows. The report does not summarize auction market prices. 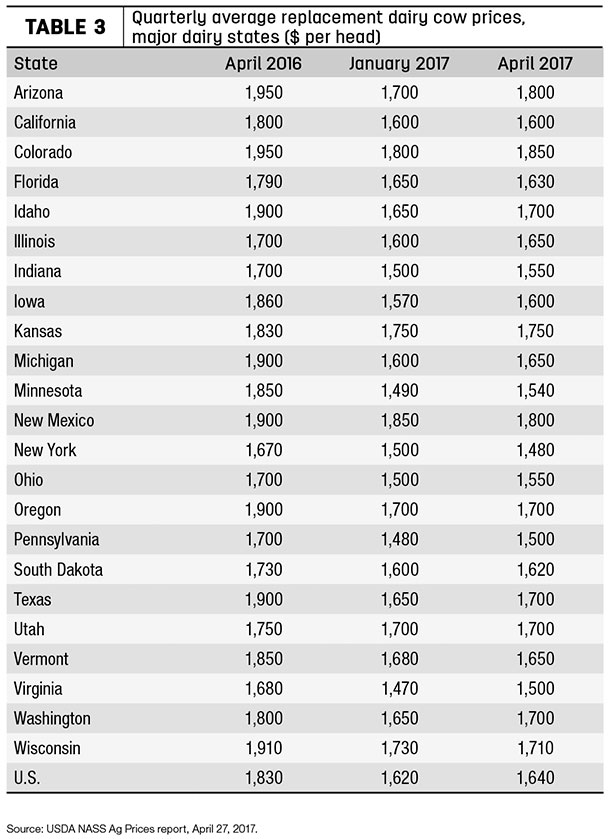