Katie Coyne
Jayden and Kennedy Kimball of Windham, Maine, are a force to be reckoned with on the softball field and in the show ring. These young dairy exhibitors are intense and dedicated with an incredible work ethic that is taking them to the national stage in both cattle showing and softball.
Katie Coyne

The two sisters, with the assistance of their parents, Chris and Jamie, have 20 All-American nominations that they have bred, owned and developed. Jayden and Kennedy entered the national spotlight of the dairy show industry in 2017 when Jayden exhibited a picture-perfect fall calf at the World Dairy Expo. Ms AOL Diamondback Raspberry Red-ET won her class and was named the Junior Champion of the Junior Show and Reserve Junior Champion of the Open Show.

In 2018, after calving in as a fall yearling, Raspberry went on to be named Intermediate Champion of the Junior Show at the most competitive show in North America. That same year, Jayden’s ownership was expanded to include her sister Kennedy and their cousins, Caroline and Andrew.

While Raspberry may have been the heifer that propelled them to the spotlight on a big stage, these two sisters have been, and continue to be, dedicated to the pursuit of winning. Jayden, 15, and Kennedy, 14, have caught the attention of elite breeders from both the U.S. and Canada. These dairymen are anxious to get their show heifers in capable hands, and that’s where the Kimball sisters come in.

Each year in March, once the snow begins to melt in rural Maine, several breeders from the nearby province of Quebec contact the girls and invite them to select a few heifers for the show season. You may be asking yourself: Why would top breeders send their heifers to Maine for the show season? It’s because they know their heifers will be in excellent hands. From March until late fall, here is a typical day in the barn for these sisters:

Jayden and Kennedy show at the 4-H and junior breed shows in Maine, the New England Summer Show, the Big E and the Northeast Fall National, the Eastern National in Harrisburg, the World Dairy Expo and at the Grand National Junior Show in Louisville. In 2017 and 2018, they also exhibited Raspberry at the Royal Winter Fair in Toronto. There are not many youth from the U.S. that can claim they have had that privilege. Not only did Jayden lead her calf, but Raspberry and Jayden were named the Junior Champion after winning their class – a huge accomplishment for a young show person. In 2018, Raspberry and Jayden teamed up again to win the fall yearling in milk class in Toronto as well.

When I caught up with these busy young ladies at the 2020 New England Summer Show, they had their neighbors, Lydia, Aliza and Levi Hill with them at the show. The Hill family is part of the Kimball show family, as the girls are all good friends. Sharing a show string with non-farm youth adds an element of responsibility to the process. The Kimball girls spend time teaching Lydia, Aliza and their younger brother, Levi, all they know about being successful in the show ring.

Kennedy shared that she and Jayden have learned a lot just by looking at things through someone else’s viewpoint. When teaching, the girls have learned that if you teach a “why,” it is easier to explain and to learn. To an unknowing onlooker, it would be hard to tell that the Hill children weren’t from a farm – a testament to their dedication to learn and the Kimball girls’ dedication to teaching all they know so that others can succeed. 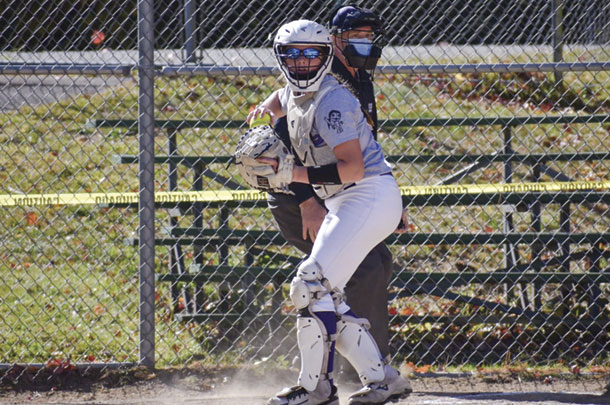 So what do the Kimball sisters do when not with their heifers? Kennedy is an All-American pitcher and Jayden is the catcher on their outstanding U14 softball team. The team traveled to the national championship in 2020, with the girls competing against the very best from around the country.

Excelling on the softball field goes hand in hand with excelling in the show ring. Hours of practice each day and giving it their very best each and every time they hit the show ring, or the softball diamond, has propelled Jayden and Kennedy to success on a national stage.

PHOTO 1: Kendall and Jayden Kimball collected many banners from the most prestigious shows in North America in 2017 and 2018 with Ms AOL Diamondback Raspberry Red-ET.

PHOTO 2: The Kimball sisters excel not only in the show ring, but also on the softball field. Kennedy Kimball is an All-American pitcher, while Jayden is a talented catcher. Courtesy photo.