Dave Natzke
The USDA’s National Ag Statistics Service (NASS) is catching up on reports delayed due to the partial government shutdown earlier this year, releasing January and February 2019 milk production reports within a week of each other on March 12 and 19, respectively. There’s the potential for improved prices based on those numbers, according to Bob Cropp, professor emeritus at the University of Wisconsin – Madison.
Dave Natzke

February 2019 U.S. milk production continued a five-month streak in which year-over-year growth was less than 1 percent. However, while cow numbers were down from a year ago, the January-February U.S. dairy herd increased about 6,000 head from December, ending a string of seven straight months of contraction. The increase came despite record-high dairy cull cow slaughter to start the year (see below).

Recent harsh winter weather throughout much of the Northwest and Upper Midwest may lead to lower milk production per cow in upcoming monthly reports.

As of February 2019, nine states increased cow numbers compared to February 2018 (Table 1), led by a combined total of 40,000 head among Texas, Colorado and Idaho. Compared to a year earlier, Pennsylvania was down 25,000 cows, New Mexico was down 12,000, and Arizona, California, Florida, Illinois, Ohio and Virginia were each down 8,000 to 9,000 head. Michigan, Minnesota and Wisconsin were down a combined 13,000 head. 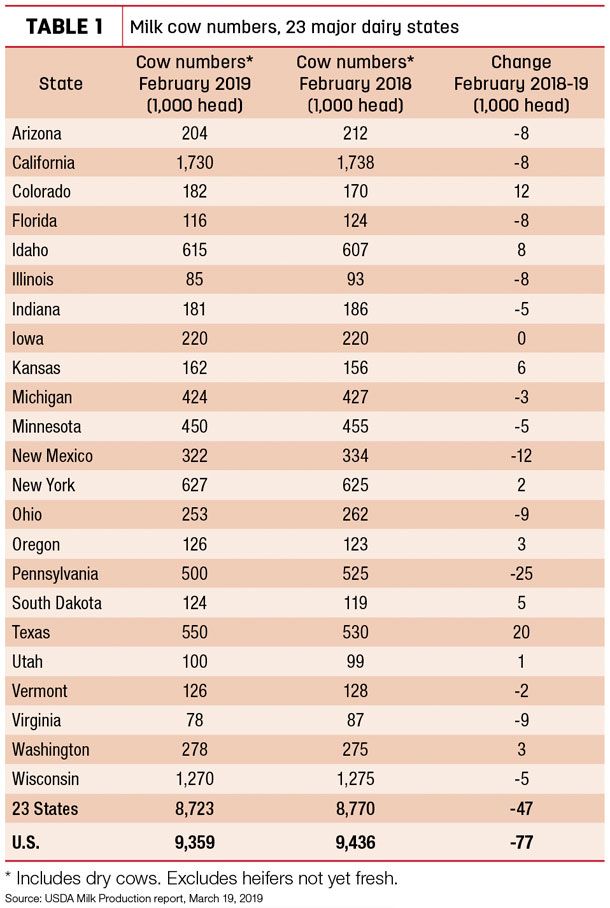 Among all major dairy states, February 2019 milk per cow increased less than 1 pound per day from February 2018. Output per cow saw the largest increases in Oregon and Texas (Table 2), partially offset by declines in New Mexico, Ohio, Pennsylvania, Washington, Virginia and Kansas. 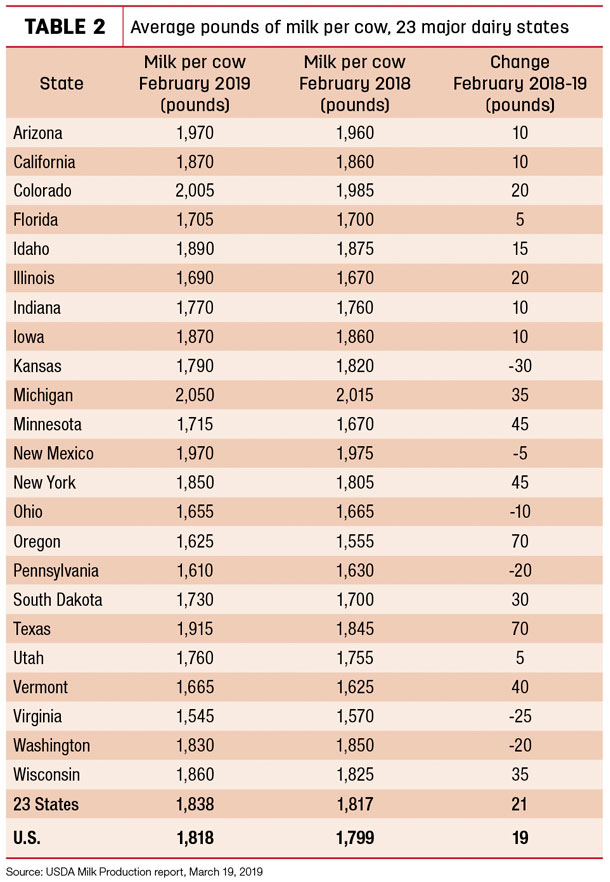 On a percentage basis, Colorado led all states, up 8.3 percent (28 million pounds) compared to February 2018. Oregon was up 7.3 percent (14 million pounds). Pennsylvania, Florida and Illinois saw declines of 6 to 7 percent, with Virginia down 11.7 percent.

As of the first day of spring, milk futures continue to show slow price recovery, with Class III reaching the mid-$15s in April-June and moving above $16 per cwt in July-November. Class IV milk price futures reach $16 per cwt in May, but don’t hit $17 per cwt through the end of the year. So while milk prices will improve in 2019, they will keep operating margins for dairy farmers tight until at least the last quarter of the year, Cropp said.

Beyond U.S. borders, milk production is expected to show only a modest increase in the European Union, be lower in Australia, and a possible drought in New Zealand could limit milk production there, Cropp noted.

U.S. dairy farmers continue to move dairy cull cows to slaughter at a record pace. Federally inspected milk cow slaughter was estimated at 278,900 head in February 2019, 19,200 head more than February 2018, according to the USDA’s Livestock Slaughter report. At 577,300 head, January-February 2019 slaughter is already nearly 27,000 ahead of the same period a year ago.

Regionally, February 2019 dairy cow culling topped 72,300 head in an area including Illinois, Indiana, Michigan, Minnesota, Ohio and Wisconsin, and was about 66,000 head in Arizona, California, Hawaii and Nevada.

Federally inspected milk cow slaughter was estimated at 3.153 million head in 2018, up about 164,600 head (5.5 percent) from 2017. Annual dairy cow culling was higher only once in more than three decades – in 1986 during the whole-herd buyout program.

There has been some good news. The index of Global Dairy Trade (GDT) dairy product prices posted an eighth consecutive increase during the auction held March 19, up 1.9 percent.

Prices for all major product categories were mixed to mostly higher:

April Class I base price slips

Dairy margins deteriorated slightly in the first half of March as lower milk prices more than offset the impact of cheaper feed costs, according to Commodity & Ingredient Hedging LLC.

The feed markets have been declining with weakness in both corn and soybean meal, as commodity funds build a record short position in the grain markets ahead of spring planting. This comes despite the fact that widespread flooding in the western Corn Belt from the recent “bomb cyclone” will likely delay spring planting across the region.