Should we feed a different diet to fresh cows?

As fresh cows usually experience a negative energy balance, some producers try to maximize their energy intake by increasing dietary starch content, but responses of fresh cows to high-starch diets in milk production have not been consistent in the literature.

Researchers at Cornell University reported cows fed a high-starch diet (26.2 percent) had faster increase in dry matter intake (DMI) (34.39 versus 32.62 pounds per day) and milk yield (68.34 versus 65.69 pounds per day) during the first three weeks after calving compared with those fed a low-starch diet (21.5 percent).

Similarly, researchers at Michigan State University compared fresh diets differing in dietary starch content (24 versus 17.5 percent) and reported cows fed the high-starch fresh diets increased DMI compared with those fed the low-starch diet (52.69 versus 48.28 pounds per day), although milk yield was not affected.

Contrarily, a recent study conducted in the Netherlands reported milk yield was greater for cows fed low-starch diets during the fresh period. They evaluated two different rates of increase in concentrate allowance after calving. 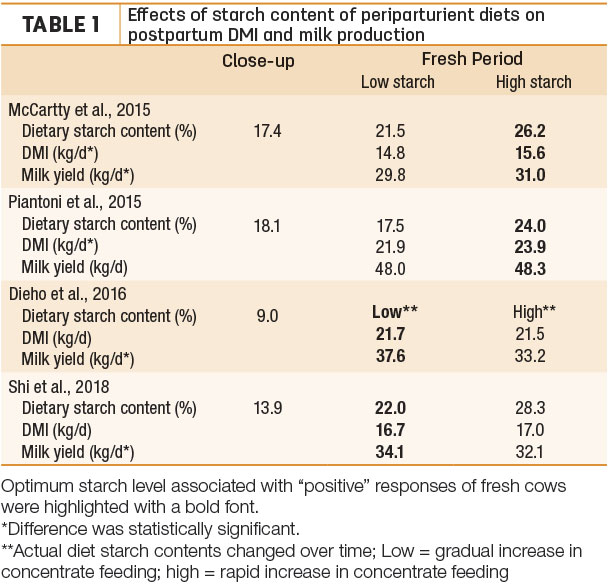 Fresh cows might need to be metabolically ready, by being fed high-starch close-up diets, to benefit from highly fermentable diets after calving. However, more and more dairies are feeding controlled-energy diets, which contain low-quality forage such as straw, before calving to avoid excess energy intake before calving and reduce metabolic complications after calving.

It is important to check what diet is being fed to close-up cows when the nutritional management of fresh cows is discussed. The optimum starch content of fresh diets is likely affected by the starch content of close-up diets, and high-starch diets may not always work during the fresh period. The fresh period should not be considered as a stand-alone separate period but as a part of the calving transition period.

It is also important to note fresh cows have a greater risk of sub-acute rumen acidosis (SARA), and appropriate management actions should be taken to reduce the severity of SARA. Researchers in 2002 reported cows with SARA altered feed preference when given a choice of feeds; they decreased intake of alfalfa pellet and increased intake of long alfalfa hay, which provides more effective fiber to stimulate chewing and salivary buffer secretion attenuating SARA.

Although animals preferred the TMR with short-particle forage during the baseline period, they altered feed preference after SARA was induced. The relative intake of TMR containing long-particle forage increased on the day of SARA and the following day (i.e., recovery day). These observations indicate cows with SARA attempt to increase consumption of long-particle forage to mitigate the severity of SARA.

Considering the greater risk of SARA in fresh cows, it may be wise to consider formulating a different TMR for fresh cows and feed less starch and more physically effective highly digestible forage fiber. Alternatively, if it is difficult to prepare a different TMR for fresh cows, we should at least consider offering fresh cows top-dressed long hay in addition to a common TMR formulated for high-producing lactating cows. This approach allows fresh cows to consume additional hay, as needed, to attenuate SARA they may experience after calving.

However, if it is difficult to prepare a different TMR for fresh cows, offering top-dressed long hay along with a common lactating-cow TMR should be considered to allow fresh cows to consume more physically effective fiber to mitigate the risk of rumen acidosis. Optimizing nutritional management of fresh cows is a rewarding task, as it helps for smooth take-off for successful lactation.

Masahito Oba is a professor of dairy nutrition and management with the Dept. of Agricultural, Food and Nutritional Science at the University of Alberta. Email Masahito Oba.