Organic trace mineral nutrition: Success across all stages of life

Jon Pretz
The trace mineral requirements of dairy animals is a topic that continues to receive a great deal of attention, and rightfully so. Although trace minerals comprise less than 0.01 percent of the total mass of an organism, they are essential for normal function.
Jon Pretz

Additionally, a deficiency in any trace mineral can result in the impaired function of any of the physiological processes listed above. However, said deficiencies can be corrected through proper trace mineral supplementation, thus preventing further impairment.

Organic trace minerals consist of the same trace minerals being chelated, complexed or covalently bonded to amino acids, analogues, proteins or organic acids in a way that allows for increased absorption in the animal (Figure 1) and to “do more with less” through lower inclusion levels. 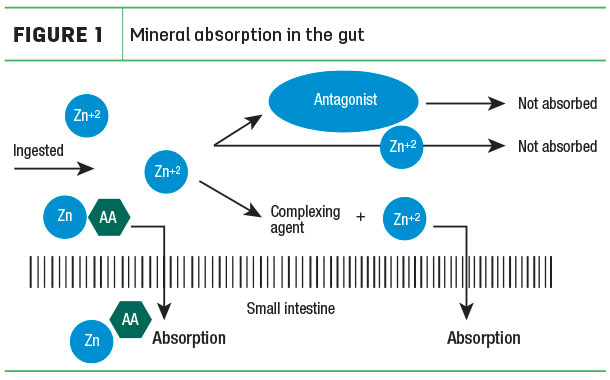 Recent research has shown organic trace minerals can be beneficial across all stages of life for the dairy animal in a number of ways, highlighted below.

Supplementing organic trace minerals to pregnant cows during the dry period is a great way to not only boost the trace mineral status of the dam but to also provide a stronger foundation for the carried calf, leading to increased efficiencies after birth. A study in 1987 showed decreased embryonic mortality, while research in 2000 resulted in heavier and bigger calves at weaning. Another study in 2001 showed increased reproductive performance later in life.

Supplementing organic trace minerals to pre-weaned calves in milk replacer and starter is a cost-effective way to increase the growth efficiency of these young animals in a relatively short amount of time. Research in 2018 showed results of heavier and bigger calves, while studies in 2012 resulted in greater wither and hip height at weaning and decreased stress through reduced peroxide radicals.

With the increased milk of 2.8 pounds per heifer, an additional 280 pounds of milk can be expected over the first 100 days in lactation, which equates to an additional $44.80 of income per lactating heifer, based on $16 milk. Research in 2018 showed a reduction in age at calving by 26.5 days and an increased milk yield of 2.8 pounds over the first 100 days in milk.

Much of the research on organic trace minerals has focused on second-and-greater-lactation cows, resulting in benefits that drastically outweigh the up-front cost. Beyond the reproductive, milk quality and hoof health benefits, research has shown a healthy increase in milk yield of approximately 5 pounds of milk over the first 90 days in milk can be expected. This equates to an additional $72 of income per cow in lactation, based on $16 milk.

A study in 2007 showed increased milk yield of 5 pounds over the first three months of lactation and a decrease in somatic cell count (SCC) by 34 percent – a 107,000 SCC decrease. And research in 2010 resulted in improved reproduction performance through a reduction in days open by an average of 13.5 days, a reduced number of services per conception by 0.27 and increased pregnancy rates at 150 days of evaluation. A decrease in sole ulcers and the incidence of interdigital dermatitis and the severity of heel erosion were included in the results from a study in 2008.

A study conducted in 2009 with organic trace mineral supplementation resulted in increased fetal and nutritional programming for the offspring of dry cows.

Dairy producers and nutritionists are engaged in responding to concerns about the impact of animal agriculture on the environment. Another priority is to support an increased production of animal products to fulfill the global demand for wholesome and affordable food. Achieving a balance between these objectives requires the application of new technologies to improve the efficiency of nutrient use, thereby reducing excess excretion into manure.

In order for an organic mineral to be effective, four criteria should be met: The organic trace minerals must have high water solubility, remain stable throughout the digestion process, enhance absorption and produce an economically beneficial response in the animal. Through performance increases in milk yield and reproduction, decreased SCC and improved hoof health, the predicted results include a return on investment that tops 2 to 1.

Organic trace minerals provide livestock with an essential nutrient in an optimized form – and thanks to their effects on animal health and welfare, producer livelihood, consumer preference and environmental protection, no stakeholder is overlooked.

In the near future, implementing organic trace mineral supplementation across all stages of life in the dairy herd will be the quickest and easiest way to build a foundation for the increased productivity and profitability of a dairy operation, especially when partnered with superior farm management. Utilizing organic trace minerals will help maximize the dairy animal’s true genetic potential by providing minerals in a form as close to nature as possible, further allowing dairy producers to build better herds and feed a growing population.

Feeding dairy animals diets that contain more bioavailable sources of trace minerals is a key way to increase mineral availability for absorption and, ultimately, to improve the trace mineral status of the animal. It is important to note responses to organic trace mineral nutrition are likely to be subtle improvements in health, performance and reproduction.