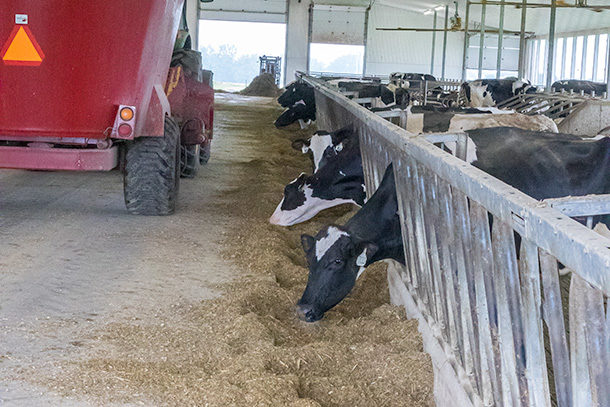 Most producers understand that minerals must be supplemented to cattle at all stages of production if they want optimal performance, especially in health and reproduction. At the farm level, different formula combinations for minerals in feeds, supplements and premixes are limitless.

The sources of the minerals that need to be provided are extensive as well. One area that has provided significant confusion to producers and nutritionists alike is the sources of trace minerals (TM) and the apparent value (i.e., absorption) of the various sources. This article will discuss these questions and hopefully help develop a more practical understanding of TM sources.

Over the years, the understanding of TM nutrition has changed. Some of this has been related to the evolution of recommended feeding rates or levels. These recommendations have once again changed somewhat with the release of the new 2021 Dairy NASEM. Once known as the National Research Council (NRC), it is now known as the National Academies of Sciences, Engineering and Medicine or NASEM. Since we are still working through this new publication, it is wise to mention the new, evolving understanding of TM information.

One thing highlighted more extensively is that TM are not well absorbed from feed and forage sources. This is also true of supplemental sources. Original recommendations outlined the dietary level of these nutrients. The focus now is more on specific absorbed levels, although this is still not well understood. The issues with supplemental TM sources include:

A common term used for TM sources has been “chelated.” Let’s start by discussing what chelated means. This describes one form in which a given mineral may be found. Generally, minerals are included in a supplement in an “inorganic” form. This means that the overall mineral is all rock, whether it is found in this form in nature or is refined or manufactured into an all-metal form. For example, one of the most common ingredients in a mineral supplement is calcium (Ca). Generally, the Ca in most supplements comes from two sources. One source is from calcium carbonate. This is found in nature most commonly in limestone. The limestone is mined, finely ground to specific screen sizes and then sold to a supplement manufacturer. This is about as simple as it comes, and it is in an inorganic form. A second common source may be mono- or di-calcium phosphate, either of which are manufactured products created by reacting either calcium chloride or calcium hydroxide with phosphoric acid. Again, these are considered inorganic.

The same situation exists with TMs. For instance, zinc (Zn) is found in nature as an ore combined with other materials. It is mined and refined/processed into various forms, one of the most common being zinc oxide. Zinc oxide has been used as a supplement in livestock diets for years but has been shown to be very poorly absorbed by cattle. It can be reacted with sulfuric acid to produce zinc sulfate, which is currently the most used source of Zn in cattle supplements and is generally the baseline against which other forms are compared. However, even this inorganic source of Zn is not well absorbed by ruminants (although better than zinc oxide), but it is relatively inexpensive. The examples here are similar and common for most of the other TM sources used in supplements, particularly copper (Cu) and manganese (Mn).

Poor absorption rates in animals, particularly of TMs, is part of what prompted research into and development of chelated or “organic” sources.

First, let’s discuss what chelated or organic minerals are. As opposed to inorganic mineral sources that are all metal or rock, chelated/organic (C/O) minerals are created by reacting (often a fermentation process) the metal or inorganic form of a given mineral with an organic molecule. This can include an amino acid (methionine, lysine, glycine), a chain of amino acids (known as a peptide or amino acid complex) or even a short protein segment, known as a proteinate. Additionally, it might include a carbohydrate (polysaccharide), an organic acid (such as an acetate or propionate) or other organic molecules. These mineral sources are also referred to by a variety of names including chelated, organic, complexed, etc. When labeled as chelated or organic minerals, this generally refers to TMs, particularly Zn, Cu and Mn. There are sources of selenium (Se) that are considered organic, found in selenium yeast where the Se is part of the yeast cell. Additionally, a form of Iodine (I) known as ethylene diamine dihydriodide (EDDI) is also considered organic.

The intended focus of feeding a C/O mineral source is:

1. To potentially protect the TM from being bound and becoming insoluble in the rumen

2. To increase the absorption beyond what can be absorbed from inorganic sources

C/O minerals largely function by protecting the mineral from microbial activity, which can result in insoluble or unavailable forms of the mineral being created in the rumen. Depending on the exact type of TM source (discussed below), the mineral itself is protected from this activity in the rumen and is subsequently released upon transport through the abomasum of the cow, where the pH is much lower than in the rumen. The pH and other enzymatic activity cause the molecule to release or transfer (transport) to other molecules at the intestinal wall, which facilitate transport across the intestinal wall and into the bloodstream. Although research results have varied, it is believed that C/O forms are more available to the animal, having a greater AC. Thus, for a given amount fed in a supplement, more of the mineral in question is absorbed. Subsequently, the amount of mineral stored or circulating in the animal increases, thus improving the animal’s mineral status. Much of the research has shown that feeding a particular source may result in a variety of performance improvements. These may include better immune response, reproductive performance, reduced foot and hoof problems, improved appetite, etc. The list is extensive, and in the event of even a marginal deficiency of a given TM, correcting the deficiency by using a C/O form can show advantages.

Research suggests that feeding a portion of the TM from a C/O source may increase overall absorption resulting in a better status of the TM in the animal. Originally, companies selling C/O minerals promoted feeding 100% of the mineral level from their source. This has been determined to be extremely expensive and not overly effective. It is understood that the rumen environment has a requirement for these minerals as well.

A rule of thumb for including C/O mineral sources in a cattle nutrition supplement has been to include C/O TM at around 30% of the total supply with the rest from inorganics. This results in an improvement of availability to the animal while maintaining a supply for rumen microbes. This also helps keep costs under control for the producer.

As mentioned previously, C/O minerals are available in several forms including amino acid complexes, proteinates, carbohydrates (polysaccharides), etc. Research has shown the various forms have potential effects on absorption. The observed effects have not been consistent and there is no definitive data that shows one form or another to be the best. Also, different companies have pursued varying levels of research on their products. This is potentially one way to differentiate the products when selecting a source. Products that have been researched to a greater extent and under a wider variety of conditions, production types, diets, forages, etc. may be preferential. A qualified nutritionist can help navigate through the data. One thing that should be understood is that the amount of comparative research with the various products is very limited. For the most part, universities do not have the budgets to conduct comparative research, and most companies are not willing to take the chance that a study they fund with a competitor’s product may not show their product to be the best.

The various forms of TMs have resulted from and in the creation numerous companies whose focus is to sell their specific TM product. Some of the companies commonly known for TM sources include*:

*Mention of specific company names is informational only and is not an endorsement.

The use of C/O mineral sources in dairy diets has become common. However, there are still many questions and still many unknowns about the various sources of these mineral. These questions can make selecting a specific source challenging. Working with a qualified nutritionist to review the data and information available can help in determining which source to use.

Dr. Steve Blezinger is a nutritional and management consultant with an office in New Ulm, Texas. He can be reached at Steve Belzinger or at (903) 352-3475.