The latest report shows 1,859 dairy producers had filed Dairy-RP applications in 35 states (Table 1). Of the applications, 971 have purchased 2,798 quarterly endorsements. Total premium costs on purchased endorsements were about $44 million, with USDA Risk Management Agency (RMA) subsidies covering about $18.1 million of that. 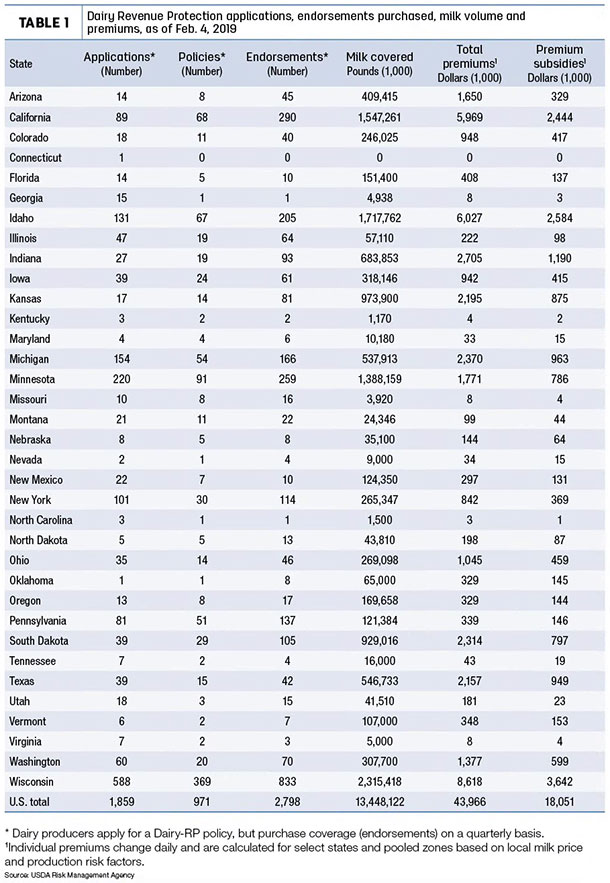 Click here or on the table above to open it at full size in a new window.

Compared to a week earlier, producers purchased 524 quarterly endorsements. Endorsements are also now available through the first two quarters of 2020.

“Time may be right because with current tight cash flows, dairy producers need a way to guarantee future cash flows for banks and stakeholders,” said Ron Mortensen, Dairy Gross Margin LLC, a firm offering Dairy-RP endorsements. “Dairy-RP may finally be a product that dairy producers understand and are willing to use. It is a tool they wanted and/or needed for a long time.”

Since Oct 9, 2018 – the first day Dairy-RP policies were offered – the 13.4 billion pounds of milk covered is about 6.4 percent of the total annual U.S. production, or about about 67,000 Chicago Mercantile Exchange (CME) milk futures contracts, Mortensen said. During the same period, CME Class III futures open interest was just over 25,000 contracts.

Dairy-RP policies are not available for sale on days of USDA dairy reports with a potential impact on markets, or days when CME markets move up or down contract limits. Producers can also participate in Dairy-RP independent of all other dairy risk management programs.

Dairy-RP is designed to insure against unexpected declines in the quarterly revenue from milk sales relative to a guaranteed coverage level. The expected revenue is based on futures prices for milk and dairy commodities and the amount of covered milk production elected by the dairy producer. The covered milk production is indexed to the state or region where the dairy producer is located. More information is available on the RMA website.