Laura Handke
Encompassing around 1,000 acres, the Carter-Stevens Dairy Farm has been milking cows twice a day since 1938. Records show, prior to the 1938 purchase, the Allen family had farmed the land in Barre, Massachusetts, since 1749.
Laura Handke

“If someone entrusted you with 250 years of work, by countless people, what would you do to keep the farm going?” Sean DuBois says.

Marrying Molly Stevens, DuBois saw his life transformed by the lifestyle and family bond that kept the farm operating and, when the time came, helped the operation diversify through his and Molly’s love of craft beer. 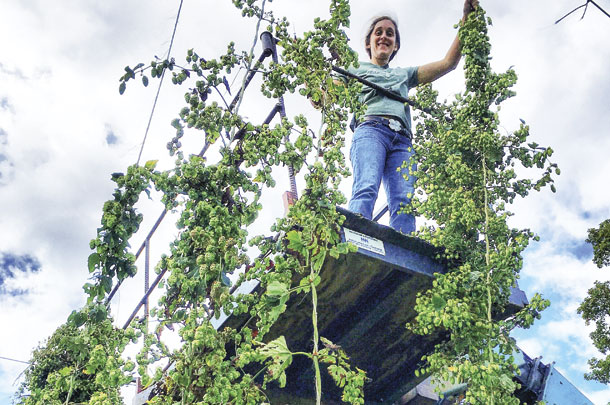 “It’s an interesting thing, joining a family business,” DuBois says. “You really have to get along. [Growing up] I didn’t really see my extended family that often – we see family every day.”

DuBois shares that, in visiting other dairy farms, one of the things he thinks sets Carter-Stevens Dairy Farm apart is the complete immersion of family into the business, including the younger generations. With the financial struggles all dairy farmers are currently facing, the lack of youth, both from a labor and perspective vantage point, puts those farms at a disadvantage, he feels.

The six family members involved in the operation include DuBois and his wife, Molly; Molly’s parents, Phil and Erin Stevens; and Will Stevens and his wife, Shayna. Today, the dairy farm milks around 100 head of Holstein cows twice a day, sells fresh farm-grown vegetables and raw milk, and offers outsiders a taste of farm life through their sought-after craft beers at Stone Cow Brewery.

Milk prices continue to decline, creating hard decisions for dairy operations throughout the country. Today’s milk prices are comparable to what a farmer received in the late 1970s, with no allowance for inflation. With the majority of the milk produced at Carter-Stevens being marketed through the Dairy Farmers of America cooperative, their farm has seen the same wholesale struggle.

However, diversification, the integration of technology and out-of-the-box thinking are helping dairies who are willing to take the challenge, afford to keep their cows.

“The thing we have going is: We have youth on our side. We don’t want our lifestyle to change; we know if we don’t have cows at Stone Cow, we don’t have an identity,” DuBois says. “And the beer taking off has ensured we can keep the cows.”

Prior to the brewery, Carter-Stevens Dairy Farm diversified their operation by harvesting and selling Supreme-quality horse hay to the tune of 8,000 small square bales per year. While brewing had been an interest, there were no concrete plans to begin a commercial operation. Then, tragedy struck. In 2010, a fire destroyed the late-1700s barn, along with all of the hay and equipment stored inside.

The story of how the brewery unfolded after the fire is enough to make a listener believe a brewery was meant to be all along.

After the fire, the family came together to discuss the farm’s future. Their meeting culminated in the decision to establish a brewery on the farm, a craft Sean and Molly were already passionate about.

In the days after the fire, a neighboring farm donated an old barn with the same historical charisma as the barn that was lost. Both the Stevens and DuBois families dismantled and reassembled the barn on Carter-Stevens Dairy, and the Stone Cow Brewery was born. 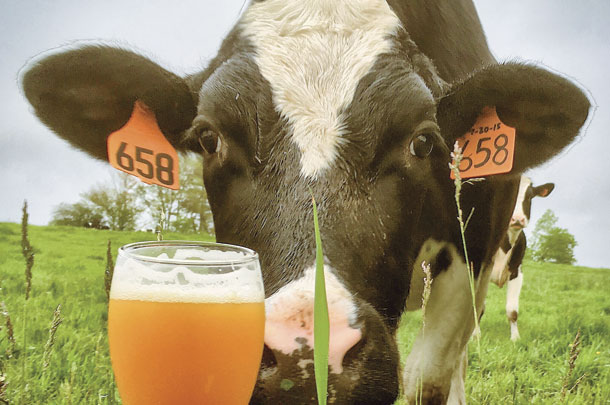 Embarking on the brewery venture at the height of the craft beer movement, DuBois knew used brewing equipment would be hard to find.

“A guy called on a Tuesday night in July,” DuBois remembers specifically. “He told us a brewery had closed and was having a sale the next day. We blindly went into the auction and thought the equipment we brought home was way bigger than what we needed. However, we brew about three times a week with that equipment.”

The demand for the Stone Cow beer grew quickly. DuBois was quickly overwhelmed, forcing him to choose between his profession as a local high school English teacher and Stone Cow’s growing business demands. DuBois chose to pursue the brewery, both for the business and the farm, and dedicated his time solely to its growth. Still, the demand was greater than one person could fulfill.

“A guy walked up to me as we were bulking beer and says, ‘I am a brewer and would like to work for you.’ So I hired him. We all knew this was an opportunity to have someone on staff who knew more than we did, and we jumped at it,” DuBois says.

The man they hired, Chris Courtney, develops the recipes and serves as the master brewer for Stone Cow. He has been with the family since the beginning of the endeavor.

Now coming into its third year, the brewery has added a restaurant and weekend summer barbecue events between June and September, growing from a few families on a Saturday night to over 1,000 meals served every evening. As a bonus experience, everything is cooked over an open fire fueled by wood harvested from the farm.

“We brought the table to the farm,” DuBois says. “What we serve is what we have to grow. When we plan a menu, we do it by looking at a seed catalog. I think we are so popular because we are a working farm.”

DuBois credits much of the brewery’s success to the atmosphere the farm provides, sharing that during the course of a day, the business serves customers from 5 to 95.

“We are the only brewery in the world that has to cut down a tree before they can brew a beer. But it just makes so much sense for us. We have been exclusively heating with wood on the farm since the 1980s,” DuBois says.

Staying true to their New England roots, the operation logs all of the wood used on the farm from their own land, leveraging the cost efficiency the fuel source provides. The logging crew is also comprised of family members.

“It’s hard work,” DuBois says. “There are easier ways, but this is the way that works for us.”

Utilizing what is grown on the property doesn’t stop at the restaurant. When new recipes are created for the brewery, Courtney and DuBois take into consideration what is available on the farm to add to the beer.

“This past year, we did a pumpkin ale from pumpkins grown on the farm and a blueberry sour from our blueberries,” DuBois shared.

The success the brewery has seen is not a fact the family takes for granted.

“We don’t know where all of this is going. We don’t take it for granted at all,” DuBois says. “We want to expand – but not beyond our means. We want to grow slowly and in a way that makes sense.”

In the end, the goal for Carter-Stevens Dairy Farm is still just as clear as it was after the fire: to keep the cows, to keep the dairy, and to keep the legacy and way of life that means so much to their family alive for the next generation.

PHOTO 1: The old barn building for Stone Cow Brewery was donated, dismantled and reassembled on Carter-Stevens Dairy in Barre, Massachusetts.

Laura Handke is a freelance writer based in Kansas.