Replace corn in the diet with lime-treated corn stover

The alkali treatment of crop residue is a practice that could transcend drought management, said Dave Combs, a nutrition professor at the University of Wisconsin – Madison.

In his presentation at the Midwest Forage Symposium earlier this year, he stated that as corn yields increase the biomass per acre also increases.

With more corn grown for ethanol, Combs indicated the premise of using both the remaining distillers grains and fiber has its merits.

Citing the USDA, he said the six states in the Corn Belt produce 132 million metric tons or nearly 68 percent of the nation’s corn stover.

As mentioned, this is not a new concept. The alkali treatment of crop residues has been tried with calcium, sodium hydroxide and ammonia.

According to Combs, calcium or lime wins out because it is not as caustic as ammonia and more environmentally compatible than sodium hydroxide. It is also relatively economical at $20 to $30 per ton.

It is important to distinguish the different forms of lime. First, there is limestone or calcium carbonate.

Limestone cannot be used to treat corn stover, as it has no effect on fiber digestibility, Combs said.

However, quicklime and hydrated lime are both sold for this purpose as Stovercal O and Stovercal H, respectively.

Since quicklime reacts with water to form hydrated lime, Combs warned that many safety issues arise with its use.

“You need to be careful in how you handle it,” he said, noting it should be stored in a dry location.

When making a slurry, the quicklime should slowly be added to a large volume of water to avoid boiling or the rupture of containers.

Workers should take plenty of precaution, as quicklime dust will cause severe irritation or burning of the eyes, skin, respiratory and GI tract.

It is very reactive with water, including perspiration on the skin and moisture in tissues in the lungs and esophagus.

Eye protection is needed and contact lenses should not be worn. If contact is made, use soap and water to remove the dust.

“Calcium hydroxide is much safer and easier to work with,” Combs said. 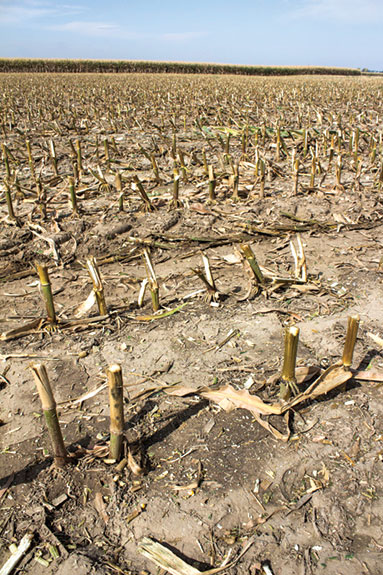 “There is no exact formula in terms of processes,” Combs said.

When treating the stover on the farm, the stover should be chopped at 3 to 6 inches to reduce the particle size and increase surface area. A tub grinder could also be used to shorten the particle length.

Either quicklime and water or hydrated lime should be added and enough water to make 50 percent dry matter feedstock.

It should be stored in a silage bag or bunker for at least seven days prior to feeding to allow the full reaction to take place.

To apply treatment in the field, begin by windrowing the stover. Apply the lime to the windrow and follow behind with water.

Then use a field chopper to pick it up off the field. Combs warned the dust during chopping could be dangerous and safety precautions should be taken.

Lime-treated corn stover can be used in cattle feed as a replacement for corn grain or forage.

Studies at Iowa State University and the University of Nebraska show lime treatment significantly improves the digestibility of corn stover and cobs.

The third diet was similar to the second but fed treated corn stover at 25 percent.

Jim Russell, a professor of animal science at Iowa State, looked into creating corn replacement feed for feedlots at 2-to-1 distillers grains to treated stover.

Both groups of steers maintained a good rate of gain: 3.84 pounds per day on the replacement feed compared to 3.9 on the corn ration.

Feeding trials in Nebraska replaced 10 to 15 percent units of corn with treated stover and saw equal performance in average daily gain, feed-gain, carcass weight and percent choice as compared to the control diet.

“In terms of beef cattle performance, this seems to be working very, very well,” Combs said.

For growing cattle, lime-treated stover can replace a significant amount of corn grain, especially if fed with distillers grains.

It can be fed to yearlings through finishing. A 2-to-1 ratio of distillers grains and treated stover can replace up to half of the ground corn in feedlot diets.

About 10 to 15 percent units of corn grain can be replaced with lime-treated stover without affecting dry matter intake, average daily gain or feed efficiency in background and finishing diets.

If considering this option, Combs said to think through the treatment process to have a tub grinder or chopper, an adequate water supply and bunkers or bags for storage.

It’s no surprise that farmers are rekindling an old idea of stretching their feed supplies further. The alkali treatment of crop residue is a practice that could transcend drought management.Photo by staff.