The USDA released its latest Ag Prices report on May 31, including factors used to calculate April DMC margins and potential indemnity payments. The April DMC margin is $12.29 per hundredweight (cwt), above the top Tier I insurable level of $9.50 per cwt (Table 1). It’s up 74 cents from the March margin and the highest since November 2014. 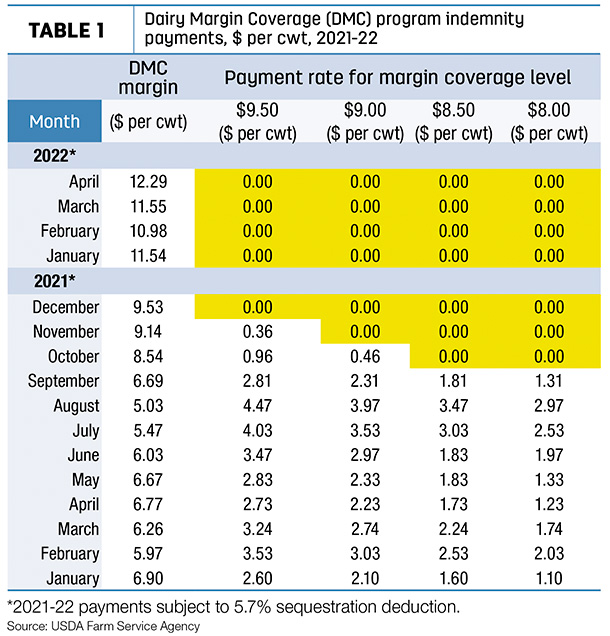 April milk prices were at least $1 higher than the month before in 23 of 24 major dairy states (Table 2), with the lone exception being California, up 80 cents. Monthly average milk prices topped $28 per cwt in six states and were $29 per cwt or higher in three: Florida, Georgia and South Dakota. Largest month-to-month increases were in South Dakota and Wisconsin, each up $1.80 per cwt. 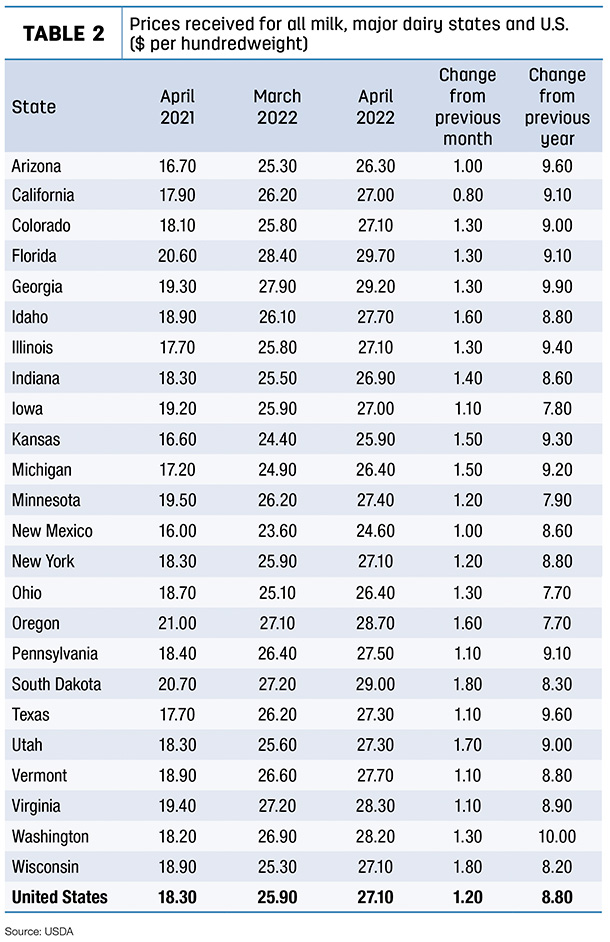 The highest prices were in Florida and Georgia at $29.70 and $29.20 per cwt, respectively. New Mexico was the only state where the April average price was less than $25 per cwt.

While the news was good on the milk income side of the ledger, total feed costs also moved to another record high, pushed by prices for corn and alfalfa hay (Table 3).

April feedstuff prices yielded an average DMC total feed cost of $14.81 per cwt of milk sold, up 46 cents from March and the highest during the DMC or MPP-Dairy era dating back to March 2014.

The larger IOFC margin means there’s a little more money to cover other production inputs. However, those costs continue to rise. The April index of prices paid for commodities and services, interest, taxes and farm wages was up 1% from March 2022 and up 14% from April 2021.

Despite those prices, dairy cull cow slaughter continues at a slower pace than a year ago. Through May 14, weekly slaughter in federally inspected plants totaled 1.23 million head, about 39,700 head fewer than the same period a year earlier. Contributing to that decline, the USDA estimated there were about 98,000 fewer cows in U.S. herds in April 2022 compared to a year earlier.