Four cameras watch down each direction of the two freestall alleys, one camera watches the calving pens, and one watches the newborn calf pens.

“We do just-in-time calving, so watching the alleys in the maternity barn for a cow that shows signs of calving is important,” co-owner Todd Augustian says. “We do have a person there full time, but the cameras give us an extra set or two of eyes helping that person watch at the same time.”

Once a transition cow starts showing signs of calving, or feet are exhibited, the cow is moved into one of four individual calving pens.

“At this point, a cow gets no more than three hours, and a heifer gets up to four hours to calve on their own,” Augustian says. “The cameras help with this in knowing how long a cow has been in there and if we have to interfere by that three- or four-hour mark.”

The cameras also aid in showing if a cow is having trouble calving.

“If the calf is backward or the cow has a twisted uterus, I can just tell they act different once they’re put in the calving pen,” Augustian says. “The cow doesn’t [lie] down or they don’t exhibit normal signs of calving. With the cameras, I can see that without having to stand by the pen and watch that cow. So it gives me a pretty good feel of what’s going on there.”

The camera system is the most help to Augustian when he is not there on the dairy.

“If somebody calls me in the middle of the night with a problem, I can get on my phone and at least narrow down the area and see what they’re dealing with,” Augustian says. “I then know what I’m going to be dealing with when I get there or can walk those who are there through how to take care of the problem. So that’s a big help.”

Overall, the camera system gives Augustian an added level of comfort when he is busy elsewhere on the dairy.

“To me, the calving facility and getting those cows off to a good start is the most important part of the dairy,” Augustian says. “If there’s a cow I’m watching, I can pull her up real quick on my phone and take a look instead of having to run back there every couple minutes. So it’s comforting knowing I can see what I need to see at any time.” 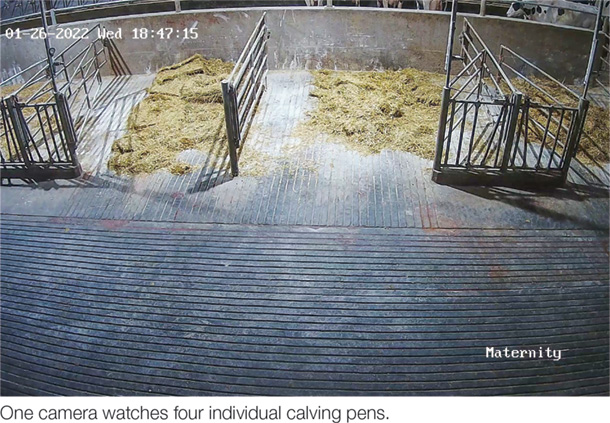 Fourth-generation dairy farmers Augustian and his brother Aaron decided to install barn cameras when they thought some corners were being cut on some of their farm procedures.

“I wanted a way to know what was going on here at times when I wasn’t here,” Augustian says. “So I got a hold of Jason Nosrati with Ag Video Surveillance, and we sat down and talked about what I wanted and what he could do.”

Augustian walked Nosrati through his dairy operation and showed him where he wanted to see. Together, they drew up a plan for 16 cameras to be installed throughout the whole farm. In addition to the maternity barn, cameras were hardwired and mounted in the milking parlor, over the cow holding area and fresh pen, in the dry cow barn and in their large equipment shop.

“A lot of credit has to go to Jason and his Ag Video Surveillance company because they took care of the whole installation and made sure the cameras were up and going, and wires were where they needed to be,” Augustian says. “So it was very hands-off for us and he took care of it all.” Through wireless connections, all views of each camera are displayed on a big screen set up in the farm’s office. Augustian says he mainly uses the cameras on his phone, and his brother and wife also have access to each of the cameras on their phones and home computers as well.

“All the employees know the cameras are here. So it keeps them on track with procedures,” Augustian says. “There’s not much procedural drift, and if there is, we see it and can correct it right away. I think having them and the employees knowing they’re here, everybody does the best they can because they know it can be seen if they’re not doing things right.”

The cameras record a week’s worth of data at a time and can be accessed if there is an issue that needs to be addressed.

“If we need to find out why or how something happened, or if there’s something we need to change or correct, we can go back and look on the cameras,” Augustian says.

Since the initial installment, nine more cameras, for a total of 25, have been added on the farm.

“I kind of wait until I got a few to do at once for when Jason makes his trip up, so he can spend a whole day doing them all rather than wasting his time just to add one,” Augustian says.

In the future, Augustian says he would like to add more cameras throughout the barns to make sure feed push-ups and feed delivery are done properly.

“It’s a lot easier to correct a problem if you can show employees what you’re talking about or what you’re dealing with,” Augustian says.

PHOTO 3: Four cameras watch down each direction of the two freestall alleys of the prefresh pen. Courtesy images.