Audrey Schmitz
In 2016, when California passed SB 1383, a global warming solutions act geared toward reducing short-lived pollutants methane emissions 40% by 2030 over the 2013 levels, the state didn’t have all the answers to completing that goal.
Audrey Schmitz

However, Albert Straus, an organic dairy farmer in Marin County, California, made it his intention to look at how he could meet those goals and what it would take on his dairy farm to do just that. He wanted to be progressive, forward-thinking and a part of the solution.

“I gave a BHAG, ‘Big Hairy Audacious Goal,’ to my sustainability director at the Straus Family Creamery to be carbon neutral on my farm by the end of 2021 initially,” Straus says. “It was made up of four parts. One is our methane digester that we’ve had operating for 17 years to take methane out of the atmosphere and make electricity for the farm.”

A second part to achieving his goal is getting away from using fossil fuels. Four-and-a-half years ago, he put together a fully electric truck to feed the cows that’s powered by the methane from cow’s waste. They also just finished converting a full-scale John Deere loader to electricity as well.

The third part is having a carbon farm plan that includes adding compost to land and using dairy cows to intensive rotationally graze to help improve soil health and pasture productivity.

“We’re pulling carbon from the atmosphere and putting it back in the soil through photosynthesis,” Straus says. “This has been recognized internationally as one of the only ways to reverse climate change rather than just reduce it.”

The fourth and most recent part to achieving his goal is feeding a red seaweed supplement to his 275 Jersey and Jersey/Holstein cross milking cows.

“I approached them to see how we could participate and collaborate with the intention to be the first commercial trial in the United States,” Straus says. 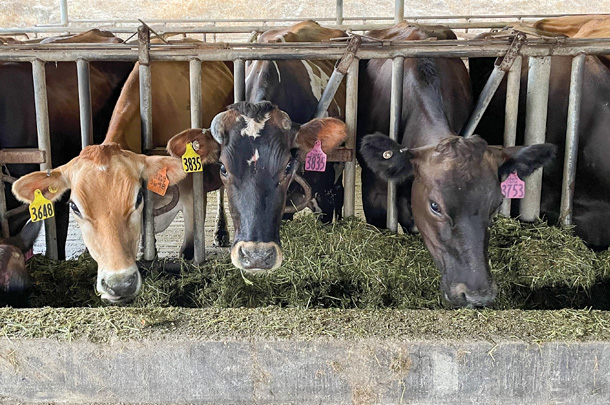 Currently, the red seaweed supplement (A. taxiformis) is not approved by the FDA as an animal feed additive. To do the trial, Straus had to receive approval from the USDA, National Organic Program and California Department of Food and Agriculture (CDFA) to conduct the trial on his organic dairy farm. Once approved, he identified 48 cows from his herd to be used in the trial: 24 for the test group and 24 cows for the control group.

The two groups were housed in separate freestall barns for 50 days in August and September as well as milked separately to track milk production and components. Both groups were fed the same TMR ration twice a day, with the only difference being a quarter-pound of red seaweed mixed into the regular 45-pound diet of the test group’s ration. 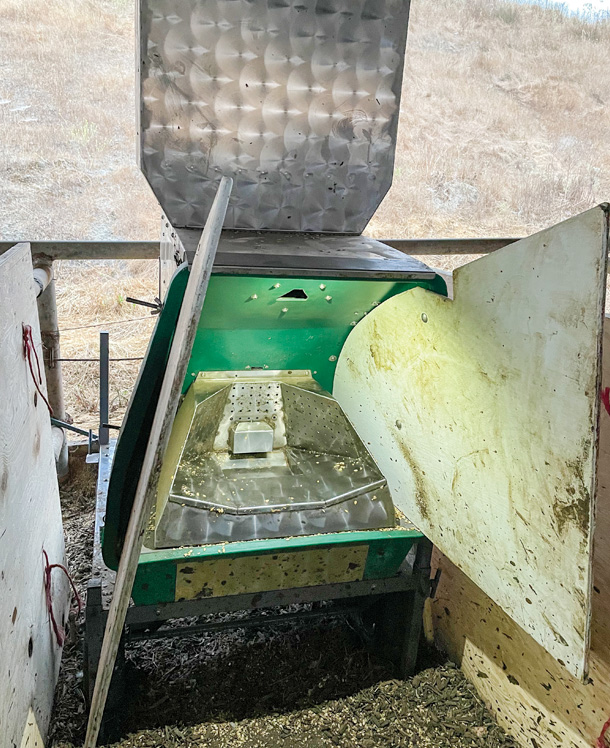 A green feed machine provided by Blue Ocean Barns was placed in each group’s freestall barn to measure the amount of enteric methane and carbon dioxide in the cows’ exhale. Each cow wore an RFID tag and would go to the machine four times a day to receive barley grain. While eating there, the machine would measure and gather data that was then exported to the internet cloud.

During the trial, enteric methane emissions were reduced an average of 52% and as much as 90%.

There also were no significant changes in milk production, and the quality of the milk was good.

“We did a blind taste test at our creamery, and it was just as sweet, rich and fresh as the control group’s milk,” Straus says. “So I felt very good about that because it would have been a deal breaker if there was off flavors or there wasn’t a fresh, wholesome flavor to the milk.”

Straus says the biggest challenge of the seaweed trial was the different routine and extra labor involved.

“As a commercial farm, it was out of the norm and it asked a lot of our team,” Straus says. “We had two extra groups of cows that had to be milked every day, fed every day and just handled every day. It also took more of my staff’s time to support this trial. So I’m really appreciative of our team for working through it.”

Together, the seaweed feed and the methane digester will reduce his dairy’s methane emissions by 90%, helping Straus meet his goal of creating a net carbon-neutral farming model by 2023.

“Blue Ocean Barns and the red seaweed supplement is part of the solution to be carbon neutral and showing that we will have an equal or lower carbon footprint than any plant-based dairy products by the end of next year,” Straus says. “It’s been a long path, and we feel we’re very attainable to that goal.”

Straus feels he has taken a leadership position in the dairy industry to show an economically viable organic dairy farming model that is good for the planet.

“I’m trying to create a model of farming on my farm that can be expanded to other farms. We test a lot of the technology on my farm so all these sustainability measures I put into place have a return on their investment. I hope they will be an income source for farmers or a savings on costs,” Straus says. “So I feel good about the progress we’re making to make farms economically viable.”

In the future, Straus hopes to be able to have enough of the red seaweed to feed his whole herd by the end of 2022, as well as extend his farm model by the end of the decade to the supplying Straus Family Creamery dairy farms and beyond.

“Out of the trial, we’re looking at seeing how we can get it authorized for use in California within hopefully the next six months or so,” Straus says.

Straus sees a future where cows can be a solution to climate change and stay an essential part of our food and farming system.

“I’m proud that we are making such progress on creating a positive image of dairy farms and how they can be an asset to our community and our food system,” Straus says. “We can show dairies in a positive light and show the way that our communities can feel confident our local farms can produce high-quality food that is good for the planet.”

PHOTO 1: Blue Ocean Barns red seaweed (Asparagopsis taxiformis) supplement is grown in tanks on land in San Diego, California, and Hawaii so it does not affect the ocean ecology.

PHOTO 2: A few cows were over 85% or 90% in methane emissions reduction just by feeding a quarter-pound of seaweed.

PHOTO 3: A green feed machine was placed in each group’s freestall barn to measure the amount of methane and carbon dioxide in each cow’s exhale. Photos courtesy of Straus Family Creamery.