Cow numbers declined for a sixth consecutive month and are now the lowest since September 2020. November 2021 U.S. cow numbers were down 10,000 from the revised October estimate and are now down also down 122,000 head since peaking in May 2021.

Compared to a year earlier (Table 1), November 2021 cow numbers were reported higher in eight states and lower in 14 states; Oregon and Vermont were unchanged. 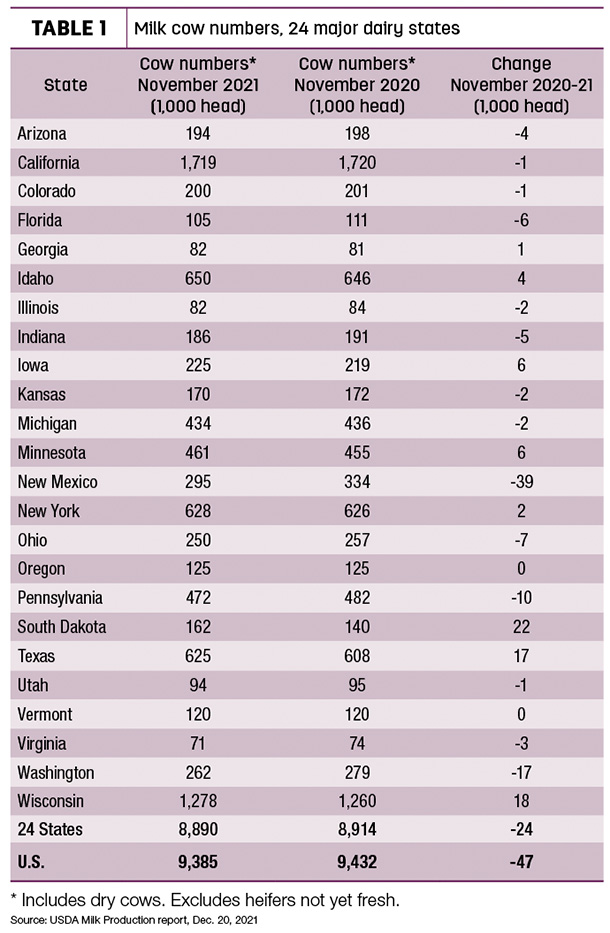 For the first time in quite a while, Texas was no longer the year-over-year growth leader in cow numbers. That designation went to South Dakota, up 22,000 head from November 2020, followed by Wisconsin, up 18,000 head, and then Texas, up 17,000 head. Minnesota and Iowa were each up 6,000 head.

Compared to a month earlier, New Mexico cow numbers were down 3,000, with declines of 1,000 head each in Arizona, California, Michigan, Ohio, Pennsylvania and Washington. Only Kansas posted an increase from October, up 1,000 head.

Cull cow slaughter continues to play a role in the shrinking milk herd size, although culling rates have steadied somewhat. According to a summary for the week ending Dec. 4, dairy cull cow slaughter at federally inspected plants was less than the comparable week a year earlier in two of the previous four weeks.

Since early June 2021, however, cull dairy cow slaughter is about 83,100 head more than the same period a year ago.

The U.S. average dairy farmer income over feed cost margin calculated under the Dairy Margin Coverage (DMC) program improved in October. October milk prices moved to a 12-month high, while overall feed costs were down 54 cents from September and the lowest since February. At $8.77 per hundredweight (cwt), the income margin was the highest since December 2020.

The November DMC margin and potential indemnity payments will be announced on Dec. 30. 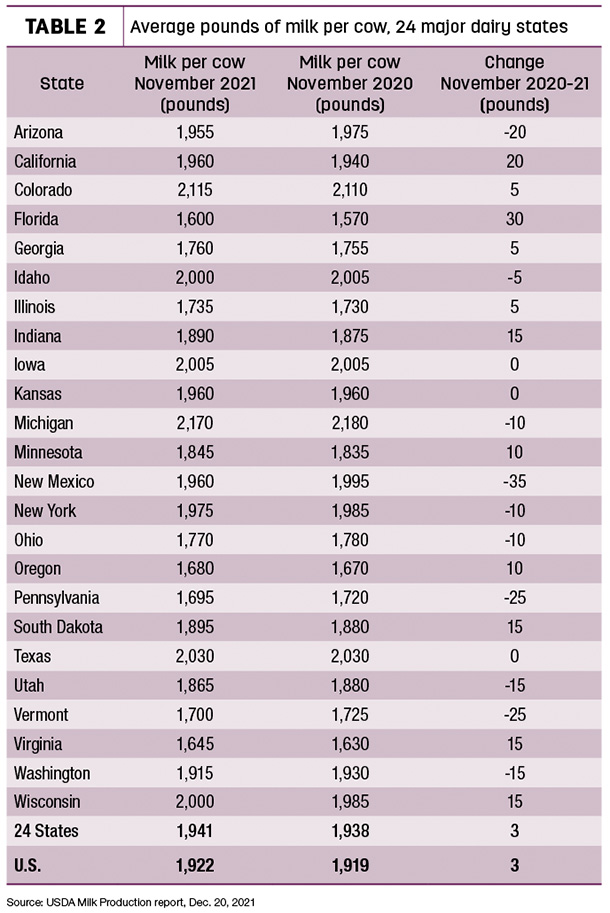 Eleven states saw November 2021 milk production per cow increase from the same month a year earlier, but most gains were less than one-half to one-third pound per day. Ten states recorded small milk-per-cow declines in November, led by New Mexico, down 35 pounds.

Wisconsin again led all states in terms of November year-over-year milk volume growth, up 55 million pounds. The Badger State was followed by South Dakota, up 44 million pounds, and Texas and California, up 35 million and 32 million pounds, respectively.