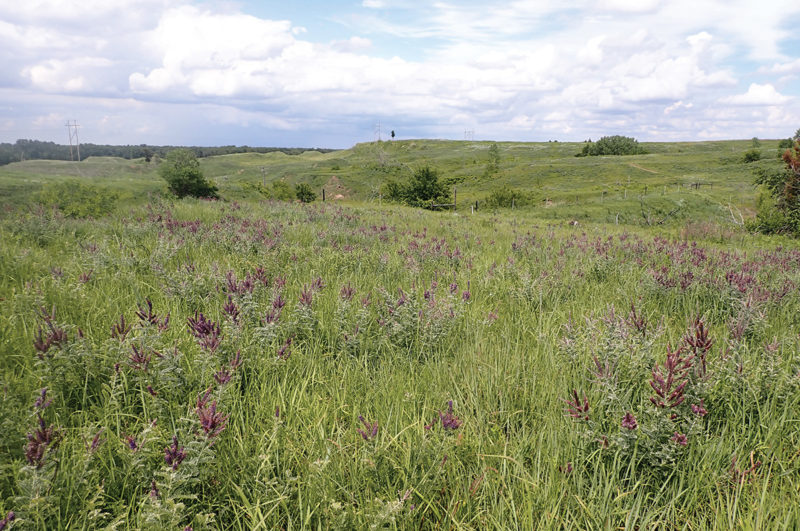 The relationship between pollinators and grazing livestock on rangelands is often underappreciated. But thanks to research being done across the Great Plains, ranchers will be able to better understand how they and pollinating insects can help each other.

Everybody and their dog knows pollinators are vital to the overall ecological health of the Earth. But just how important are they to livestock producers in particular? Perhaps just as pivotally, can grazing livestock not only coexist but be a benefit to these insects?

According to research being done on the Great Plains by the USDA’s Natural Resources Conservation Service (NRCS) and the Xerces Society – a nonprofit organization whose mission is to conserve rangelands in the Great Plains by conserving invertebrates – the answer is yes.

Talk of pollinator health isn’t a new thing in agriculture. Pollinators have been accounted for in every farm bill since 2008, and the industry has made great strides in that regard, says Sarah Hamilton-Buxton, farm bill pollinator conservation planner with the Xerces Society. However, the emphasis has mostly been placed on restoring and creating new pollinator habitat, such as planting wildflower borders at the edges of crop fields. Quite often, rangelands are forgotten in the conversation.

“Rangeland as pollinator habitat has been overlooked,” says Hamilton-Buxton. “But that’s changing. We have a lot of data on the value of rangeland grasses. But we’ve realized there’s a lack of information and forage quality data on native rangeland forbs, which can potentially be very valuable for both livestock and pollinators.” 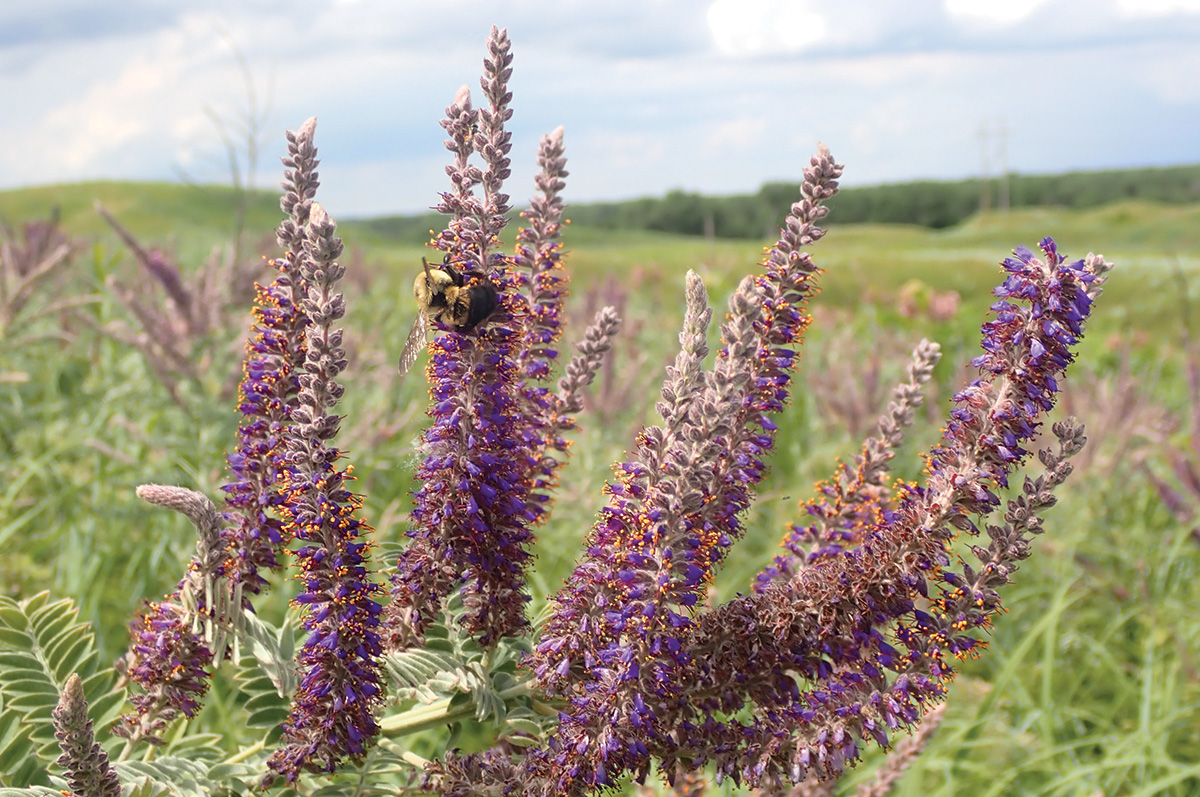 A brown-belted bumblebee feeds on leadplant, a native rangeland forb, on rangeland in Nebraska. Photo by Katie Lamke, Xerces Society.

So why does an organization like the Xerces Society care about working with ag groups? Well, because they need to. Ranchers are essential stewards of grasslands in the Great Plains, where most of the rangeland is privately owned. Successful livestock grazing prevents rangeland from being converted to cropland or urban development. This preservation of rangeland provides contiguous areas of pollinator habitat. Well-managed rangelands are home for not only pollinators but other wildlife species, and ranchers’ management decisions play an important role in their conservation.

“Ranchers are the ones doing the work to keep native grass green-side-up,” says Hamilton-Buxton. “If it weren’t for them managing this land and turning a profit, it gets converted to cropland, oil and gas, or urban development.”

Hamilton-Buxton says that often, when she steps onto a ranch, the rancher is surprised to hear her positive prognosis for his rangeland. For decades, she says, there has existed in the ranching community a misperception of the value native forbs have in grazing systems. Some of these plants can be toxic to cattle and other livestock, which understandably makes producers a bit gun-shy about them. Sometimes, highly palatable and nutritious native forbs are even misidentified as noxious weeds and dealt with accordingly (i.e., goldenrod being mistaken for leafy spurge). While most ranchers are well versed in the quality of grasses on their grazing land, knowledge of their forb populations is, through no fault of their own, often lacking.

To remedy that data and information gap, Xerces and NRCS have undertaken a multiyear project to analyze the forage quality and mineral content of native rangeland plant populations across the Great Plains. By the end of 2022, extensive sampling will have taken place in North Dakota, South Dakota, Nebraska, Montana, Kansas, Oklahoma and Iowa. The goal is to encourage grazing practices that will continue to promote strong rangeland health. While encouraging grazing might seem counterintuitive to some people in strengthening the pollinator population, Hamilton-Buxton says just the opposite is true. 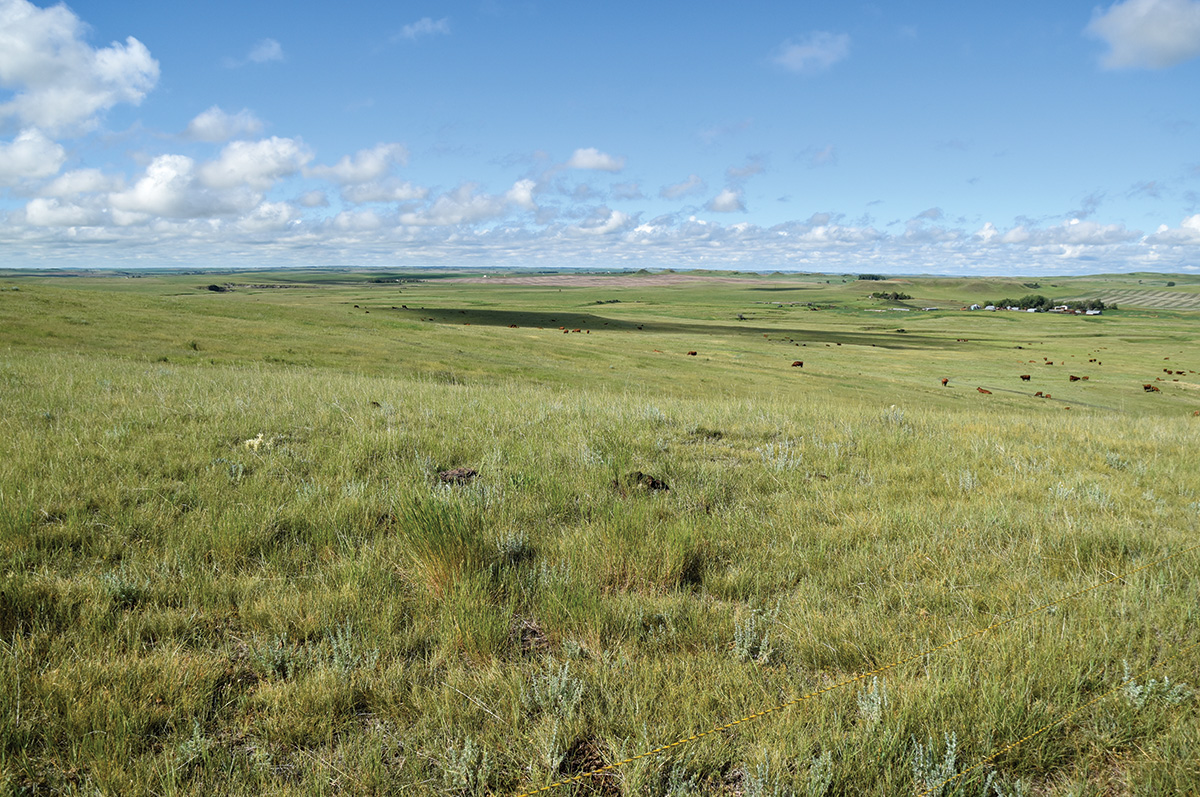 The rangelands of the Great Plains evolved across the millennia with many natural disturbances, including wildfire, drought and, crucially, widespread grazing by large mammals. The Xerces Society and similar organizations say that maintaining such disturbances is not only acceptable but necessary for the health and profitability of rangelands and pollinators. When handled carefully over the long term, carefully managed disturbances can increase rangelands’ quality for pollinator habitat. If we idle that grassland, it might be good for pollinators today and tomorrow, when they still have forbs. But fast-forward five years, and that grassland has become invaded with woody plants or invasive cool-season grasses, and you’ve lost a dramatic amount of plant diversity, and the pollinators are out of food. We’ve learned the hard way throughout the decades that idling rangelands is not the long game here.

There is, of course, no one-size-fits-all management plan. Even when viewing only the Great Plains, a lot of variation exists in how rangeland management is best implemented to help both livestock and pollinators. Ranchers know their land better than anyone; no one else is as equipped to carefully monitor the grasses and wildflowers on their rangelands and adjust grazing plans and practices accordingly, so that all parties – from a fraction-of-an-ounce honeybee, to a hillside wildflower, to a 1,300-pound mama cow – can enjoy their greatest health.