Last year, the nation’s dairy farmers produced in excess of 30 billion pounds more milk than they produced 10 years ago. In a recent publication (Agricultural Projections to 2026), the USDA suggests milk production will increase at an even faster rate during the next 10 years.

In 2026, the USDA projects U.S. dairy farmers will produce 259.7 billion pounds of milk. This is almost 50 billion pounds more milk than produced in 2016 (see Figure 1). Let’s put that milk number in perspective. 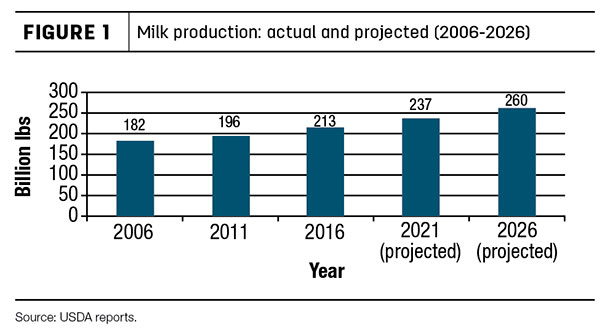 For example, this amount of milk is the equivalent of adding last year’s annual production from an additional 2 million U.S. cows to current milk supplies. (Note: Not all the anticipated additional production will come from additional cows. The USDA only projects the nation’s dairy herd to grow by 85,000 head within the next 10 years.

Almost all of the projected increase is expected from more milk per cow. Average annual production per cow is projected to increase about 5,000 pounds by 2026.) Or, put another way, the state of California produced about 40 billion pounds of milk in 2016. By 2026, the U.S. will add another California, in terms of milk production, and then some.

Stop and think about California’s dairy plant capacity: The state has more than 75 dairy processors. At least that much additional plant capacity will be needed by 2026.

Some may question the USDA’s projection, saying low milk prices and margins will drive more dairy farmers out of business – thus reducing, not increasing, milk production. However, history says otherwise. There are years like 2009 when production declined, due to low milk prices, from the previous year.

But nearly always after a declining production year, dairy farmers bounce back and continue to produce more and more milk. Gains in milk produced per cow, alone, increase the total milk supply more than 1.5 percent each year on the average, without any growth in cow numbers. There is nothing currently on the horizon – economics or policy-wise – to significantly challenge the USDA’s projection.

We are already seeing the impact of inadequate plant capacity in some regions of the country. For the sixth time in the past three years, the Northeast Federal Milk Market Order administrator received a request, which was granted, to allow temporary dumping of surplus milk while keeping the dumped milk pooled.

This lets the dumped milk remain eligible to receive, from the order pool, the difference between the order’s blend price and lowest class price, generally Class IV. This request was prompted by milk supply that exceeded demand and plant capacity. Meanwhile, in other areas of the country, surplus milk is transported hundreds of miles just to find a plant with capacity to handle the milk.

Handling an ever-growing milk supply requires more dairy plant capacity. Additional plant capacity will come from existing plants expanding and the building of new dairy plants. This has and is happening today. Today, the average output of a cheese plant is almost three times greater than the output 30 years ago. The output from a nonfat dry milk powder plant is about 2.5 times greater.

The good news about needing more plant capacity is that the demand is there to utilize a growing milk supply. Table 1 shows the annual disappearance and sales of the primary dairy products processed in the U.S. in 2006 and 2016.

The obvious conclusion from Table 1 is: Increasing demand for cheese and powder should handle the growth in milk production.

Plus, increasing butter demand should absorb the cream generated by powder plants and excess cream from cheese plants. All of which is good news for the dairy industry.

The USDA in its 2026 projection report supports this conclusion by stating commercial dairy demand should grow faster than the population increases. The report points out:

Some may ask about yogurt and frozen dairy products using a portion of the growing milk supply. From 2006 to 2016, yogurt production increased almost 1 billion pounds from 3.8 to 4.7 billion pounds. However, for the past four years, yogurt demand has changed little.

Granted, consumers are shifting to “Greek-style” yogurt, which uses more milk compared to conventional yogurt. Even if yogurt demand would increase another 1 billion pounds over the next 10 years, that increase would still be small compared to the milk utilized in cheese and powder. Also, similar to yogurt’s status, ice cream sales have remained flat over the past few years.

Not to overlook fluid milk, but as Table 1 shows, fluid sales are declining. Those declining sales end up in a cheese vat or dryer. There are new and innovative fluid products being marketed. In 2016, sales of these “other fluid products” was 13 percent higher than the previous year, but total volume is still relatively small, only 170 million pounds in 2016.

The bottom line: Based on today’s market information, cheese, butter and powder will utilize most future milk production growth.

Building additional dairy plant capacity requires money. Who will provide those funds? In the past, both public companies and dairy farmers have invested in dairy plants. This has changed in recent years, with much of the major cheese and powder plant expansion funded by dairy farmers.

Dairy farmer cooperatives may go it alone to expand, or they may strategically partner with public companies, especially those with an established market. There will also be some groups of dairy farmers, outside of the cooperative structure, who will invest in dairy plants, again either alone or in partnership with a cooperative or public company.

The main reason for this prognostication is: Dairy farmers have the most at risk. Milk has little value if there is not a plant to process or manufacture the milk into a consumer product. Many dairy farms want to expand their production but cannot because there is no available market.

In order to have a dependable market for current production, and to facilitate future production expansion, dairy farmers will become more involved financially in processing, investing in a market for their milk production. Dairy farmers have done this in the past. They are doing it today, and it will occur more in the future.

The economics of dairy plants and dairy farms are similar in that investment is high, returns are low and, in most cases, volume is a key to a reasonable profit. These factors hinder and deter other investors who presently do not have a current connection to dairying.

Dairy farmers have and continue to make significant investments in producing milk, but a lack of markets puts that investment at risk. The future will see more dairy farmers directly involved in developing and funding dairy plants in order to have available and dependable markets for their growing milk production.

RESPONSE: U.S. dairy farmers should not pursue the past as their future

BUT, pursuing past conduct of making more and more milk, far below profitable demand, and receiving the resulting price, which is less than what it cost to make the milk, is not in dairy farmers’ best interests.

TRUE, dairy farmers have and may continue to fund most processing plant expansions through their cooperatives.

The USDA may project the dairy industry’s future based on past dairy farmer conduct, but dairy farmers can and should choose to change those projections by choosing to pursue basic market economics and profit.

U.S. dairy farmers should instead choose and implement the policies promoted and supported by the National Dairy Producers Organization.