With no let-up in the need to cultivate profitability, dairies constantly seek ways to manage expenses while increasing income opportunities.

As a result, most farms emphasize getting heifers bred in a timely fashion so they can enter the milking string and contribute to the herd’s productivity – and begin paying back their rearing cost.

A number of dairies and heifer raisers have come to depend on reliable, actionable data from animal monitoring systems to improve heifer reproductive programs and ensure animals are being bred on time and calve at targeted ages.

Not only does this strategy help achieve reproductive and herd goals, it also cuts heifer time on feed to lower raising costs. Some dairies have been able to reduce days on feed by as many as 20 days or nearly one full estrus cycle thanks to this information.

Heifers are generally highly fertile, with conception rates of 60 percent or higher commonly achieved in most herds. This means that if you detect a heifer in estrus, the odds of achieving a pregnancy are in your favor.

But it’s not unusual to miss estrus events or incorrectly detect heifers with visual heat detection because people make mistakes or get busy doing other things. Heifer synchronization programs developed in recent years have helped deal with this challenge, but these protocols have been adopted with varying success on U.S. dairies.

In contrast, nearly all heifers show electronic system activity generated by estrus events – allowing users to more effectively manage reproductive programs for these animals. The data is also incredibly reliable, which reduces the number of false positives or missed heats that occur with visual heat detection or other protocols.

The increased heat detection capabilities mean farms can often reduce the time or number of services it takes to achieve a pregnancy (or both), thereby tightening breeding windows and reducing time spent on feed.

Or if the dairy has adopted a heifer synchronization protocol, it can more closely manage that program for effectiveness and compliance since the animal monitoring data enables users to track animal responses to each step in the protocol. If specific actions are not taken or not administered on time, it will be reflected in the data, since animals will not respond as expected.

Dairies can also use the data to evaluate animal performance and use the information as a means to manage groups of heifers, heifers within groups or individually within entire herds.

You can quibble about whether the cost to raise a replacement heifer is closer to $2,000 or $2,500 on your farm (Figure 1), but the fact remains that these animals represent a serious investment. 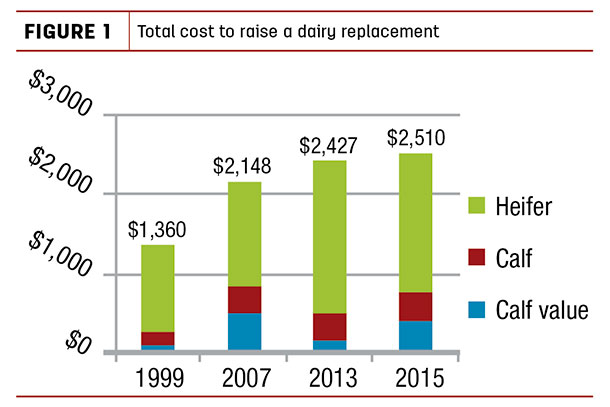 The ability to reduce time spent on feed can have significant economic implications. Again, in some cases, dairies have been able to move heifers into the milking herd nearly a full cycle earlier when using animal management systems.

Of course, your heifer program takes body size criteria such as wither height, body condition score, body length and pelvic area into account when developing breeding protocols and calving age targets. These basic tenets of heifer rearing should not take a back seat to feed reduction goals.

But if you are better able to reliably identify animals in heat and reduce the time to achieve a pregnancy, the financial implications are noteworthy.

For example, assume a 1,200-cow herd breeds 500 heifers annually. It takes $2.77 per day to feed these animals from weaning to calving, according to figures from the latest cost of production analysis from the University of Wisconsin. That’s $19.39 a week.

By shaving 20 days off of your breeding window, you’ve saved $55.40 per head. If you attain the 20-day reduction for all 500 heifers, that equals $27,700 in feed savings alone. Even if you reduce time on feed an average of two weeks per heifer due to more accurate heat detection, that amounts to $19,390.

Further, the ability to better manage heifer reproduction has ripple effects beyond feed expenses. It potentially impacts other investments such as semen purchases, facilities, labor and others.

It also can help dairies that struggle with getting heifers bred on time to reduce the number of animals that calve at an older-than-desired age. This is important because each day calving is delayed beyond 24 months costs $1.50 to $3.00 per heifer.

These figures only begin to underscore the financial benefits dairies can achieve when they apply the reliable, actionable data from animal monitoring systems. Ultimately, when users plug in their actual farm numbers to the equation, the results are even more meaningful.

In an era when every dollar counts, the combination of trustworthy information and timely management is a powerful profitability tool.