Medeiros and Son Dairy used to pay more than $20,000 each month to provide electricity to their 2,450-cow dairy, but now a 1.1-megawatt solar array installation is providing 80 percent of their electrical needs.

In operation for five months, the solar energy system was purposefully designed to provide 80 percent of the electricity the operation needed and not send any energy back to the grid. While the actual amount and cost of electricity the dairy will now purchase from the utility has not been calculated, they’re already generating other benefits.

“We sized the system so all the power would be utilized on-farm,” says Brian Medeiros, farmer and president of sustainable business development for the dairy, located in Kings County, California.

“Our electricity provider does not pay anything for electrical power generated from the grid. So we ensured we can use all the power in-house. We are still waiting on the electrical provider to finalize rate tariffs and all the nitty-gritty details, but so far we have not had an electric bill.”

The solar array at Medeiros and Son was installed by CalCom Solar. Medeiros selected the company because they do not use subcontractors, the company was willing to work with the dairy to meet their goals, and they offered a cost-efficient, high-quality product along with systems monitoring for 10 years.

“You need to go look at other installations and ensure that the setup proposed for your farm is going to work,” Medeiros advises. “It took us eight years from the idea stage to the final install and operational phase.

The majority of that time was due to the energy company’s restrictions on how we use and distribute that power.”

Medeiros opted for a land-based array rather than rooftop panels. He wasn’t comfortable putting electricity-generating systems on top of the cows, and “the buildings were never engineered to support the weight of the panels,” he says. 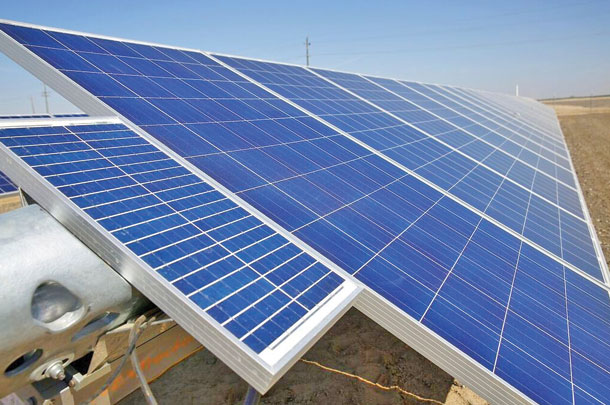 The array of panels follows the sun, with a single-axis tracking system from NEXTracker. The farm is able, under California’s new Net Energy Meter Aggregation (NEMA) regulations, to distribute power from the single array to several dozen electricity meters on the farm.

The farm’s solar array occupies 6 acres of non-productive land. This parcel is close to the shop for easy access and monitoring as well as adjacent to the largest irrigation well, so offsetting its electricity use was simplified.

The land on which the array is situated was formerly a canal that had been filled and was generating only 2 or 3 tons of forage each year. Now it produces much more, providing energy and lowering utility costs, allowing the dairy to better regulate cow environment, with positive cow health and productivity impacts.

Connecting the irrigation wells to the solar power has been beneficial in terms of saving energy costs but also assists with crop production and conservation concerns. Because they no longer need to purchase energy for irrigation, they have better control over when, where and how much water is needed for optimal crop uptake and growth.

“It allows us to be as conservative with the water as we can and irrigate when we need to irrigate the crop without worrying about the higher charges from power during – and not during – peak rates,” Medeiros says.

Irrigation and cooling, as well as milking, are the components of the farm that utilize the highest percentage of electricity. The cows have to be milked no matter what, but the potential to increase the use of fans for cow cooling and enhance productivity without generating large electricity bills is an important aspect of the solar array’s cost-effectiveness.

Cooling was the most expensive part of the electricity bill generated by the dairy, according to Medeiros. “What [solar] has done is allowed us to be able to invest a little bit more money into the cooling process.

We’re already starting to turn cooling fans on for the cows sooner and ensure that we can do a better job at keeping our cows cool and comfortable.”

Decreasing milk production loss means more income generated through milk sales. Two years ago, after redoing the cooling system in the barn, rather than their normal 15 to 20 percent loss of milk production in the summer, the dairy saw only a 10 percent reduction.

This decrease in milk production loss was directly attributable to a cooler, more comfortable cow environment.

Medeiros expects similar savings in milk production loss now that they can harness the energy the farm generates from the solar array without having to factor in the high electricity costs of running the fans.

Medeiros estimates they will have an overall 10 percent savings on milk loss simply by keeping the cows cooler through more frequent and extensive use of fans for cooling.

Medeiros selected solar as the alternative energy source for several reasons. Wind is not a reliable option in their region. An anaerobic digester depends on manure from the cows. Should the farm ever change directions, or even reduce cow numbers, solar panels will still generate electricity.

The starting investment is much smaller when compared to output than for other alternative energy options, Medeiros says. “Also, the fuel for electrical production is one of the most dependable natural resources to date. The sun is going to do what the sun is going to do.”

The solar installation, now that it is operational, is hassle-free for the dairy. The company provides monitoring and ongoing maintenance. Some daily labor is needed to clean the panels, keeping them free from dew and film, but the amount of time is minimal and does not require additional hired labor.

In 10 years, the dairy will transition to maintaining and monitoring the panels themselves, but Medeiros doesn’t anticipate any major concerns.

“Solar can directly assist farmers in providing better environments for animal health because it puts money back in their pockets, which they can then spend on further improving their operations,” adds Dylan Dupre, vice president of business development for CalCom Solar.

“The systems usually pay for themselves in less than five years, and with lease financing, there is often no out-of-pocket investment.”

The use of solar energy has increased profitability by enhancing their productivity while decreasing energy expenses, all while having a positive impact on the environment through the reduction of carbon dioxide emissions.  PD

PHOTO 1: A 6-acre track of non-productive land is now producing a new crop for a California dairy: solar energy.

PHOTO 2: Solar energy is providing 80 percent of the electrical needs for Medeiros and Son Dairy. Photos provided by CalCom Solar.

Tamara Scully is a freelance writer based in northwestern New Jersey, specializing in agricultural and food system topics.