Over time the knowledge and ability to get cows bred has taken tremendous strides towards greater on-farm success. Reproductive success takes effort from every angle of the dairy and starts with an understanding of pregnancy rate and the factors which impact it most.

In the past, pregnancy rate has been evaluated by looking at the percentage of cows bred during a 21-day heat cycle and confirmed pregnant. Rather than looking at the equation in three-week increments, dairy producers can learn more about herd pregnancy rate by further investigating what is included in the following equation (See Figure 1 .)

Evaluating pregnancy rate by focusing on heat detection rate and conception rate separately can allow you to better evaluate where change can be implemented to see improvements.

Table 1 outlines some of the influencers on heat detection rate and conception rate.

Reproductive technology advancements have helped dairies improve the precision of heat detection rate more significantly in the past few years, and changes can be seen in as quickly as two to three estrous cycles.

Conception rate is much more confounded because it is impacted by many areas of the dairy operation and variables that are hard to control. Improving conception rate requires a commitment and investment from the dairy producer.

Boosting conception rate with the ration

One area that can have a profound effect on the cow’s ability to conceive is nutrition. Many key parts of the ration – like energy levels – will directly impact the dairy cow’s ability to become pregnant.

After all, reproduction is a luxury that can only be achieved when the proper ration and environment fulfills maintenance and milk production requirements.

On-farm research confirms the benefits of a ration supplemented with bypass omega-3 and omega-6 EFAs. In the trial, cows fed bypass EFAs had higher pregnancy rates by five percentage points. Since heat detection was similar between the two groups, the improved pregnancy rate was achieved through an enhanced conception rate.

Adding EFAs to the dairy cow’s ration has additional benefits that can impact the reproductive success of your herd. Omega-3 and omega-6 EFAs can optimize immune function, enhance visible signs of heat and reduce incidence of metabolic disorders postpartum.

The pregnancy rate in summary

An optimal pregnancy rate and reproductive success takes efforts from all areas of the dairy. Work with those involved on your operation and your herd nutritionist to identify opportunities for improvements, keeping in mind:

Each day dairy producers evaluate and analyze herd reproduction to see where gains can be made. Untangling the pregnancy rate equation can help you better understand where change is taking place. 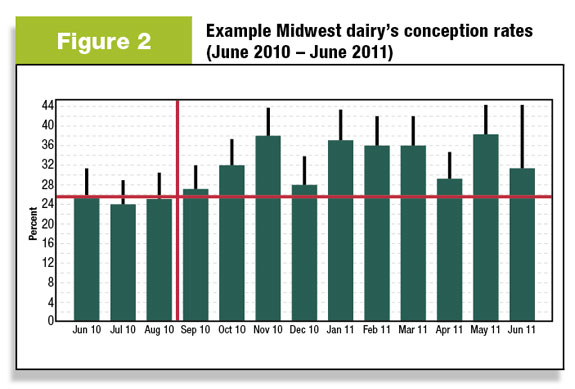 However, the dairy decided to investigate if the nutritional change was really the variable making the difference or if other factors – like heat detection – improved herd performance.

Utilizing records from DairyComp 305, the dairy was able to isolate conception rate and see if the ration caused the overall increase in pregnancy rate. Based on the findings, the dairy left their ration unchanged to maintain conception rate gains.

Pankowski has more than two decades of technical on-farm support experience and currently consults with nutritionists and dairy producers in the Northeast and Midwest.

References omitted due to space but are available upon request to editor@progressivedairy.com .