Undercover videos and social media have brought too much focus to poor cow comfort and issues in the dairy industry. However, the industry’s increasing awareness and proactive approach to maximize cow comfort on dairies is what needs to be highlighted and displayed.

It began as a benchmarking project with the University of British Columbia, which created a regional database of assessments in California, the Northeast, Texas and New Mexico.

Since 2010, six program specialists have completed more than 600 assessments and scored more than 105,000 individual cows in the U.S. and Canada. These dairies represent over 790,000 milking cows, or about 8 percent of the milking population in these two countries.

The program’s diverse database encompasses information completed on freestall, open-lot, tiestall and robotic milking herds, and it includes dairy cattle ranging in parity and stage of lactation. The benchmark data presented below is summarized from mature, high-producing Holstein cows.

An analysis of this original benchmark data (about 40 freestall dairies each in the Northeast and California) was completed to identify herd-level factors associated with lying time, in addition to risk factors for lameness and hock injuries. The Northeast consisted of a variety of stall base types, whereas the California dairies were all deep-bedded.

For each assessment, one or two visits were made to the dairy to assess one milking pen. Management information was collected through a 20-minute interview with the herd manager, and facility measurements such as stall dimensions, feedbunk and water space, and bedding cleanliness were completed in the assessment pen.

During the milking of this pen, lying time transponders were attached to cows, and the hocks and knees were scored for any hair loss or injury. As the cows exited the parlor to return to the pen, the lameness assessment was conducted on all cows in the pen.

After the assessment was complete, the producer received an individualized report highlighting the data collected on the dairy as well as how that farm compared to the regional benchmark for each cow comfort measure.

The aim during the report delivery meeting was to promote discussion about cow comfort issues on that dairy and to identify attainable solutions that the dairy wants to implement to improve cow comfort and productivity.

During the collection of the original benchmark data, 40 cows in the assessment pen were randomly selected to wear a lying time transponder, which tracked lying behavior every one minute for a 72-hour period.

The data was then summarized to determine average daily lying behavior for the individual cows and the pen. On average, cows spent about 11 hours per day lying down, and more variation was seen between individual cows within a pen compared to variation between farms and regions (Figure 1). 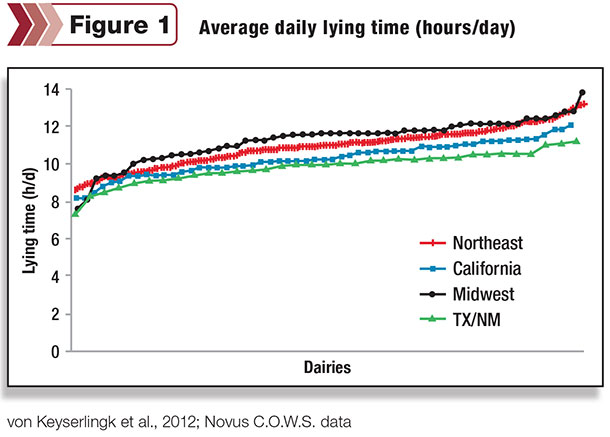 All cows in the assessment pen were scored for lameness on a 5-point scale adapted from the University of British Columbia. Cows scored 3 points or greater were considered clinically lame. On average, lameness prevalence was highest in the Northeast, but every region had dairies that were at both extremes (Figure 2). 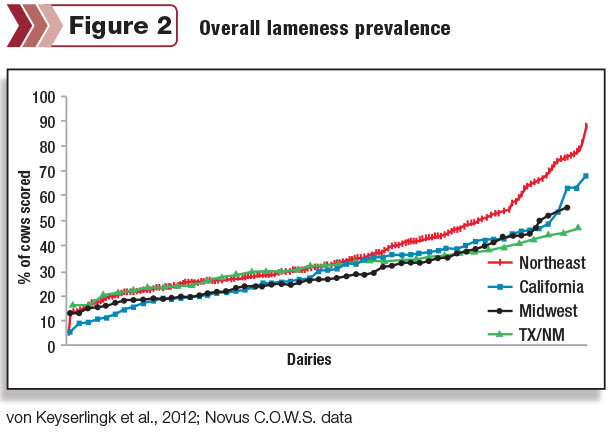 In the Northeast, deep-bedded stalls and access to pasture at some point during lactation were associated with lower lameness.

Cows that scored 2 or greater had hair loss or an injury or swelling. Similar to lameness prevalence across the country, every region had dairies that were at both ends of the spectrum of hock injury prevalence (Figure 3). 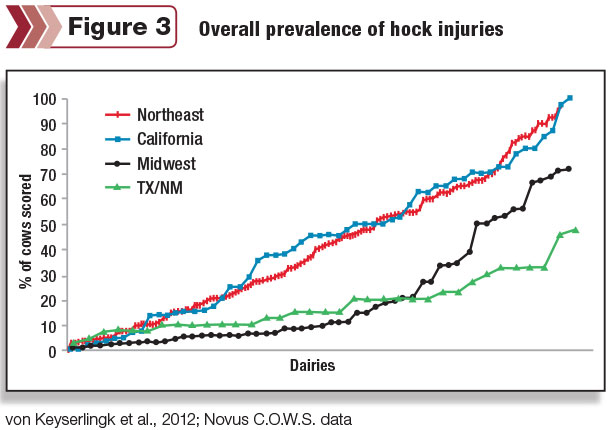 Although the application of these key learnings will vary from farm to farm, this information allows producers to take advantage of the knowledge and experiences gained through the C.O.W.S. program and assessments.

Increasing awareness of cow comfort issues on farms has and will continue to allow the industry to become more proactive in their management practices. Having regional and individual data about cow comfort measures allows producers to make the best decisions possible for their individual herds and the industry as a whole. PD