When working with dairy farms, it is a well-known fact no two systems are the same. Large variation in management, facilities, time budgets and attitudes can impact many parts of the business, including cow comfort.

It is because of this individuality producers can often accomplish the same positive results by approaching an issue in different ways. Implementing tools and services on the farm can help identify key issues and be a catalyst for change, whatever it may look like. This article illustrates this point clearly by showing data from a cow comfort-based, on-farm assessment program.

The Novus C.O.W.S. program is a comprehensive on-farm assessment and benchmarking program based around capturing data to indicate the impact a dairy cow’s environment has on her. The data collected involves cow-based measures, including prevalence of both lameness and hock injuries.

During the assessment and reassessment, the same high-producing, mature cow pen was evaluated on each dairy. In the time between the two assessments, various facility and management changes were implemented on the farms.

The changes made ranged between individual dairies and included actions like increasing the amount of bedding, increasing stall maintenance, changing the type of bedding or altering the stall base in either the assessment pen or other pens on the dairy.

All hocks in the assessment pen were scored based on the Cornell University 3-point hock assessment chart. Cows scored as “equal to or greater than 2” were considered to have a hock injury consisting of hair loss, a wound or swelling.

Data from the reassessed dairies proved to be very encouraging for the program (Figure 1). It was found that the prevalence of hock injuries across all the dairies had decreased between the time of the initial assessment and reassessment. 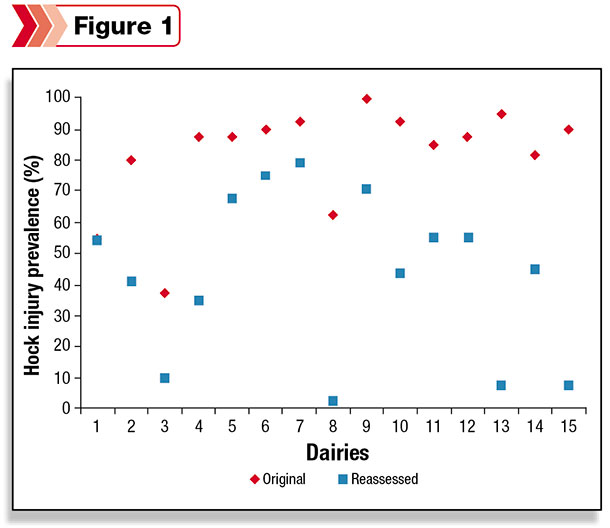 The mean difference of this decline was 38 percentage points. Dairy 15 accomplished great individual results and decreased their hock injuries by 80 points. This difference was the result of changes implemented after receiving the initial assessment data.

Some of the adjustments made on this specific dairy included reduced stocking density from 112 percent to 100 percent, increasing feedbunk space from 18 inches up to 20 inches per cow, improving parlor sanitation and improving alley cleanliness.

Another dairy individualized their approach to decreasing hock injuries by changing the stall base completely. This dairy also saw a dramatic decrease in the prevalence of hock injuries, improving by 87 percentage points.

Lameness was also recorded during the assessment and reassessment phases. All cows in the assessment pen were scored for lameness using a 5-point scale adapted from research done at the University of British Columbia. Cows scored as “equal to or greater than 3” were considered clinically lame.

The results in lameness were also positive, showing that after an initial assessment, there was a drop in lameness throughout all of the dairies with the exception of two (Dairies 3 and 12,Figure 2). There was a mean decline in lameness prevalence of 17 percentage points. 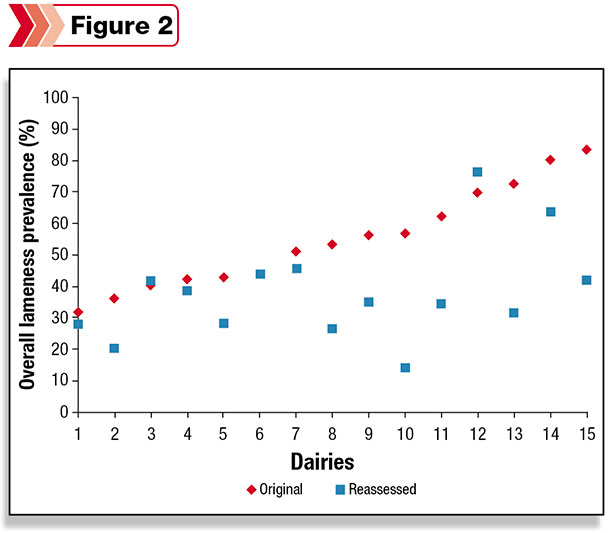 Just like the individuality of the dairies and their improvements, the resulting change in lameness ranged from a drop of 43 to an increase of 6 percentage points. Dairy 10 took the cake for the largest improvement by reducing their lameness 43 percentage points. Dairy 13 also made a statement, dropping their lameness prevalence 41 points. This was accomplished by a well-maintained, shallow-bedded stall with 2 to 3 inches of sand.

As a result of the program, dairymen have learned, adapted and improved their operations. Remembering that no two systems are the same, there are large variations in the improvements made by these producers to increase cow comfort.

In nearly all of these instances, producers were able to use the cow-based measures from their individual dairies, provided by the program, to make necessary changes and reduce lameness and hock injuries. These improvements can positively impact culling rates, reproduction and production. Regardless of the size and scope of the dairy, producers can still make a positive difference in cow comfort. PD