Who are the dairy processors?

Dairy processors are a vital link between the dairy farm and the consumer. Processors take farm milk, then process or manufacture the milk into quality, safe, desirable, convenient and usable consumer products or as an ingredient for other products.

Some dairy processors may not purchase farm milk directly but instead purchase cheese, powder, whey or cream from the initial milk processor. Then they may further process, slice, shred, churn, freeze or package into a dairy or dairy-based products.

My source of who are the major dairy processors is Dairy Foods, a magazine that focuses on the milk processing and manufacturing industry. For many years, Dairy Foods has published its annual list of the top 100 dairy processors in North America based on total dollar sales as reported to, obtained by or estimated by the magazine.

Table 1, taken from the most recent list, shows the top 15 North American dairy processors based on sales in 2013. The table also shows the type of company (cooperative, privately held, publicly traded), major products associated with the processor and the processor’s or parent company’s country. 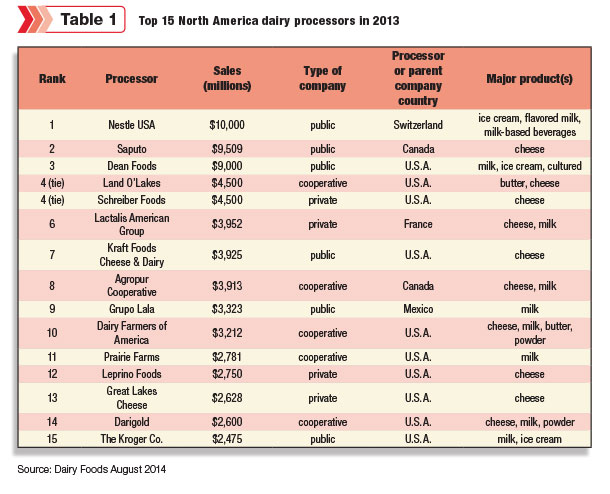 The globalization of the U.S. dairy industry is reflected in the list. Five of the top 10 processors are companies with primary ownership outside the U.S. Going further down the list, one will find 16 processors with foreign ownership. Why are other countries interested in U.S. dairy processing?

The reasons most likely vary from company to company, but my list includes the following: The growth of dairy consumption in the U.S., especially cheese, makes the U.S. an attractive country to invest in dairy. Regulations in some countries hinder the potential for growth, thus requiring processors to look outside their own borders to grow.

Plus, opportunities to expand dairy sales in their respective countries may be limited by stagnant populations, the economy, milk supply or other factors, thus making investing outside their own country more desirable.

In addition, dairy processing has been profitable for many companies outside the U.S., providing them with capital to invest. For those companies wanting to invest in dairy, the U.S. presents attractive investments with a number of established, successful and well-equipped processing plants along with willing sellers and growing market opportunities.

Not to be overlooked, the U.S.-based processor, Schreiber Foods (ranked fourth), has several overseas plants. This processor has plants in Asia, Europe and South America. Plus, we must remember many U.S. processors have extensive international sales, and in some cases, ventures with processors in other countries.

The type of ownership reflected in the dairy processing segment is interesting. Ownership of the top 15 largest is almost evenly divided with four private processors, six public and five cooperative processors.

However, a review of the entire list shows that about 50 percent of the processors are privately owned, with 25 percent owned by public companies and 25 percent dairy farmer cooperatives. Land O’Lakes is the cooperative with the highest sales volume, followed by Canada’s Agropur. Then rounding out the top five are Dairy Farmers of America, Prairie Farms and Darigold.

Looking back at the 10th annual Dairy Foods top 100 list, published in 2003, and comparing it to the recent list provides five interesting observations, as follows:

1.Sales – Processor sales increased significantly over the past decade. Total processor sales on the recent list are double the amount reported in 2003, $124 billion compared to $62.6 billion.

2.Concentration – I expected the dairy processing industry to be more concentrated today compared to 10 years ago. This is not the case. The top 15 dairy processors on the 2003 accounted for about the same level of sales (56 percent) as the 2014 list.

During the past 10 years, Nestlé, through acquisitions and new dairy ventures, has significantly expanded its presence in the U.S. Two processors ranked in the 10 back in 2003, National Dairy Holdings and Parmalat Canada, are no longer around.

5.International – Processors with foreign ownership also remained about the same, 16 in 2014 and 17 in 2003. However, their percentage of total sales increased from 20 percent to 33 percent.

What will the top dairy processor list look like five, 10 or 15 years from now? Will there be new names on the list and some familiar names no longer around? Will the list include more processors with foreign ownership and will they continue to increase their share of sales?

Will cooperative involvement in processing increase or decrease? For the answers we will have to wait and watch with interest. PD