Many dairy farmers have had times when the cows back off on feed consumption for no apparent reason and milk production drops. Then just as mysteriously, everything returns to normal. The conception rate may drop for a month – and it too then returns to normal.

Cows have runny noses for several days, and then it goes away. The dairy farmer is quick to blame the feed company for a bad load of grain – but can’t prove it. Or the herdsman gets chewed out for not catching those cows in heat on time. Or maybe a virus was brought in by the guy who picks up the cull cows.

Increasingly, more attention is being given to mycotoxins as a probable cause of these undesirable and intermittent problems in dairy herds. Symptoms of mycotoxicosis can be vague and unspecific. However, the problems caused by mycotoxicosis tend to fall into three general categories in dairy herds, and each of these problems will have a negative impact on the financial bottom line of a dairy farm.

Mycotoxins are found in nearly all forages and processed grains. Eliminating them from the environment is next to impossible. Crop farmers and dairy farmers will find that the level of mycotoxin contamination in feeds varies from year to year and from different growing conditions.

Since the vast majority of feed grown and stored on dairy farms is forage – both corn silage and hay crops – dairy farmers must be aware of the conditions conducive to the occurrence of mycotoxins in their forages.

Within the dairy industry, the feedstuff with the highest propensity to have mycotoxin contamination is corn. Mycotoxins can be found in corn silage, corn snaplage, high-moisture corn and corn grain. Corn byproducts such as hominy and distillers grains can also be contaminated with mycotoxins.

The prevalence of mycotoxin contamination is increasing worldwide as the global trading of grains and commodities increases. A well-managed grain processor or feed manufacturer should have in place, as part of its quality control program, a mycotoxin-testing protocol.

Mycotoxins seldom occur in isolation. Given the fact that one mold is capable of producing several mycotoxins, several molds can contaminate one feed ingredient. With several ingredients included in a feed ration, it’s not uncommon to find multiple mycotoxins in finished feeds. This allows for interactions among mycotoxins, resulting in synergistic or additive effects on the animal.

Ruminants are exposed to mycotoxins in a variety of ways, including:

To date, there are hundreds of mycotoxins that have been identified, and they are usually associated with diseased and moldy crops as well as growing conditions that encourage the growth of molds. The most commonly analyzed mycotoxins include: 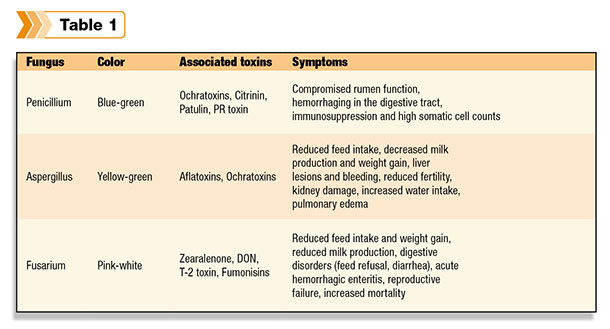 Spores will transfer to the subsequent crop and thus allow fungal growth to establish quickly and strongly. Plowing under harvest residues will reduce spore contamination of the subsequent crop and thus reduce fungal infestation and mycotoxin formation. No-till systems seem to enhance the risk of mycotoxin formation in a field.

Mycotoxin binders and absorbents added to cows’ diets have been around for many years. These products do not remove mycotoxins from the affected feed, per se, but react with them in the cow’s digestive system to render them ineffective or less effective. Binders come in either of two forms: inorganic or organic.

Inorganic binders are essentially products originating from the soil consisting of a variety of chemical elements such as silicates and aluminum that bind with the mycotoxin molecules. Not all inorganic products work on all mycotoxins. They are relatively inexpensive but require a high inclusion rate in animals. Inorganic binders can be mixed with finished feeds at a mill or at the farm as part of a TMR.

Organic binders are essentially carbon-based polymers – carbohydrates. Examples would include products such as oat hulls, wheat bran, cellulose, pectins and yeast cell walls. Organic binders are also intended to react with toxin molecules, making them ineffective in the digestive system.

In recent years, there has been much research conducted on yeast cell walls. Different strains of yeast contain varying levels of cellulose and sugars known as gluco-mannan-oligosaccharides (MOS).

The unique arrangement of these molecules enable them to bind with different mycotoxins. Advanced research is being conducted on MOS products to identify specific binding sites that will interact specifically with a selected mycotoxin.

As milk production per cow increases, feed passage rates through the rumen have also increased, which gives rumen microbes less time to detoxify mycotoxins in feeds. As the prevalence of mycotoxins increase worldwide, dairy farmers will benefit by adding mycotoxin binder products that contain both an inorganic and an organic mycotoxin binder.

We know that some level of mycotoxins can be found in most feeds no matter how careful a farmer is in raising and storing feeds. Mycotoxin binders are sensible insurance that will help control the problems associated with mycotoxins when the need arises. PD