Labor allocation – Where is time spent on the dairy?

As dairy producers have become increasingly aware of the significance of current labor issues, much discussion has revolved around labor costs and increasing minimum wages. Although cost has significant implications in the labor topic, understanding how and where employees spend time may be more important than the cost per hour and value of employees themselves.

Labor efficiency can help track how much labor is utilized compared to output, but the scope of labor efficiency is extremely broad and different for many farms.

Over the years, the Dairy Farm Business Summary and Analysis Project has shown a wide variation in labor efficiency. In 2016, a labor allocation study conducted by Ashley Howlett and Jason Karszes, Cornell CALS PRO-DAIRY, collected labor data to determine where these differences were occurring.

Within each category, farms were asked to report hours for specific tasks within that area, along with other parameters. The total estimated hours were compared to their 2015 Dairy Farm Business Summary and were estimated within five percent of the annual hours recorded from the previous year, unless a significant change occurred.

Table 1 shows the average labor efficiencies seen in the Dairy Farm Business Summary and the range of those parameters.

The study didn’t show as wide of a range in cows per worker and milk sold per worker, however, it was significant among the various production models observed in this study. Participating farms had a wide variety of heifer and crop outsourcing, which led to most of the overall variation seen. 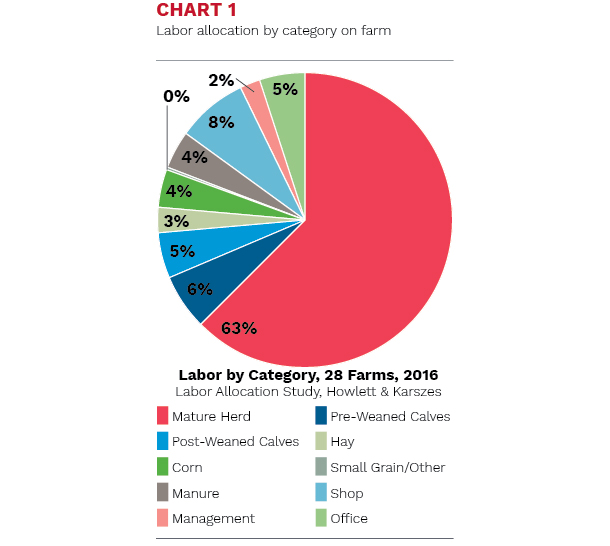 The average farm in this study raised 82 percent of heifers to cows and 53 percent of farms had some level of outsourcing in their young stock program.

When looking into the variation of the time breakdown, the table below displays the range, standard deviation and interquartile range for each category. Focusing on standard deviation, the greatest variation is in the mature herd category, with management and office time, shop, and pre-weaned heifers following behind. 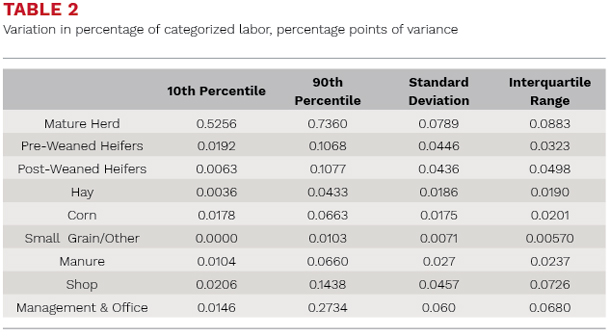 Various labor strategies with regard to outsourcing may be where some of these differences lie. Management and office time is different for every farm. As much as management time was defined, some of these hours may have been recorded differently among the farms and this is where differences in time spent on human resource management would appear.

The shop category followed, which is an area that most had the hardest time tracking. Most shop employees spend their time mixed with other activities, and combined with a range of outsourcing repairs, this was an area that was expected to have a wide range.

To think about this study in comparison to your own farm, a simple start is to track how employees are spending their time. Finding inefficiencies within tasks starts the process of finding new methods to accomplish the task. Knowing where a lot of time is spent can also help find areas where the biggest impact can be realized.

Since most of the labor on farms is spent in the parlor, a simple tweak like placement of towels or dip could save a few seconds in your parlor routine, but in the long run have a big impact.

Although tracking time seems like a daunting task, encourage employees to think about their tasks completed within each day and how long those tasks take. We typically underestimate the amount of time we spend doing certain things because we omit the smaller details within a task. For example, feeding calves may take an hour; however, the entire task of feeding grain and water and cleaning up materials may actually put the task at two hours.

If time tracking seems completely infeasible, a much simpler question to ask is: What is one thing that would make this task easier? Although simple, small details and little things like keeping the tools you need next to where you use them, or changing a daily routine, can dramatically improve the efficiency of completing the task and could even make someone’s day run a little smoother.

As labor issues become increasingly important, improving efficiency will only be a solution if you can deliver the same or better results than you are currently achieving. Ensuring a job is completed efficiently and effectively is where the greatest gains are. Involve employees to find changes that get things done faster, and work together to figure out the best system. Beginning to record data on the tasks and activities within the farm is a step towards managing and observing performance of farm efficiency.

Ashley Howlett was a dairy management specialist with PRO-DAIRY. She has returned to her farming roots to become a dairy herd manager. Email Anna Richards or Jason Karszes, PRO-DAIRY, with comments or questions.