Is fungal disease the silent killer of corn silage?

Fungal disease of corn can cause a multitude of problems including yield loss of the corn, mycotoxin contamination and a decrease in plant quality for animal feed. In 2012, fungal disease caused a 10 percent loss in corn yield, and 24.4 percent of grain harvested was infected with mycotoxins.

These diseases can increase lignin content of the plant. Lignin content can be influenced by plant stress as a response to drought, cold or other diseases such as fungal infestation.

It has also been shown that cold and heat stress can cause an increase in phenolic compounds. When looking at corn seedlings, it was reported that infestation of the root by an endophyte caused increased plant rigidity and increased the structural components of the plant. This may be due to the plant attempting to protect itself from further fungal infection.

The increase in lignin can cause a decrease in neutral detergent fiber digestibility (NDFd). When discussing corn silage, this becomes even more important as corn silage is about 70 percent fiber.

Studies have found that increasing NDFd of corn silage by 2 percent caused cows to eat more (11 pounds per day) and produce more milk (13 pounds per day). Fungal infection in corn can also cause a competition for nutrients, which can decrease the non-fiber carbohydrates such as sugars and starch. It can also decrease the fat content in plants.

There are many different methods of controlling fungal diseases, which include hybrid selection, management practices such as crop rotation and tillage, and chemical methods of control, such as fungicides. There are benefits and disadvantages to each of the above methods, and all methods can be used in combinations with other methods to help mitigate disease.

Hybrids are the most common method for disease control; however, technology is still being developed for some diseases, and hybrids do not completely eliminate the risk for disease. In some cases, the effect of the resistance may be decreased or eliminated when insect infestation occurs.

Crop rotation may be a helpful tool; however, it may not be possible in some systems. This is also true for tillage due to the farm bill. Finally, chemical means such as seed fungicide or foliar fungicide may also be a helpful tool to be used alone or in combination with the above methods.

Fungicides may be a potential management tool to control the growth of an already present fungal infection or to help prevent a possible infection. Different types of foliar fungicide may be used depending on the goal of the farmer.

Two of the most common classes of foliar fungicides are triazoles and strobilurin, or a combination of both. Strobilurin fungicides may also have positive plant health effects outside of preventing and treating fungal disease.

After pulling several studies, researchers reported in 2011 an average increase of 4.5 bushels per acre of grain yield with pyraclostrobin fungicide application. However, the grain yield response was higher when disease severity was higher, and return on investment was higher when crop prices were high.

One important point to make about this particular study is that, although positive results were seen, the authors concluded that the increase in corn yield did not always make up for the cost of the fungicide application based on yield alone. Foliar fungicide offers a management strategy that allows producers to be flexible depending on environmental conditions and other variables that may influence the return on investment.

Several studies have been done by the University of Wisconsin (UW) Extension and University of Minnesota Extension examining the potential benefits of foliar fungicide on corn silage quality and yield.

One study reported that foliar fungicide application on corn silage significantly increased corn silage output by 0.7 tons dry matter (DM) per acre compared with untreated corn silage. Fungicide use also led to a numerical increase in nutrients such as crude protein and starch while also significantly decreasing the amount of NDF and increasing its NDFd.

A 2011 study from the UW extension analyzed the use of foliar fungicide at the R1 and V5 stages of corn crop growth and concluded that Headline AMP (BASF), when applied at the R1 stage, had the highest yield for one of three counties tested. The corn treated with Headline AMP also had lower disease severity when compared to untreated corn silage in one of the three counties.

Another study done in 2013 showed no significant difference in nutritive value, DM yield, milk per ton or foliar disease scores at harvest for corn treated with various types of fungicide when compared with untreated corn silage. So results were variable between the two studies.

Recently, our group at the University of Illinois looked at corn treated with various applications of foliar fungicide and its effect on corn silage quality and in situ digestibility. This study concluded that corn treated with one (1X; at V5), two (2X; at V5 and R1) or three (3X; at V5, R1, and R3) applications of foliar fungicide had higher sugar and fat contents when compared with the untreated control (1.21 sugar and 2.89 fat versus 0.72 and 2.71 percent DM, respectively).

When the silage was fed to lactating Holstein cows, the cows receiving treated silage tended to have higher fat-corrected milk (FCM) and energy-corrected milk (ECM) feed conversion when compared with control (1.65 versus 1.47 for FCM/DMI and 1.60 versus 1.43 for ECM/DMI).

An economic analysis was then completed to evaluate potential benefits associated with the increase in efficiency. The total income from milk yield over feed cost (IOFC), taking into account the added cost of fungicide, was $7.35, $7.54, $8.31 and $7.83 for CON, 1X, 2X and 3X, respectively (Table 1). 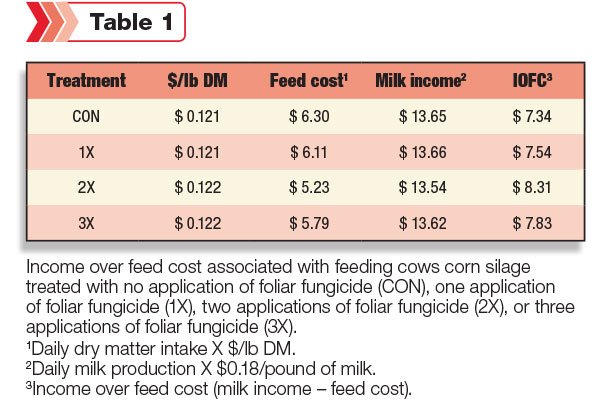 Aerobic stability can be an indicator of the presence of fungi since fungi and mold are the main organisms responsible for heat spoilage of corn silage. It can be measured by temperature loggers placed into aerated silage or, most recently, externally by the use of drones.

Figure 1 shows the regular and infrared (right) views of silage bags taken from a camera attached to a drone. The white portions in the image indicate high temperatures, whereas the black portions indicate lower temperatures. With this information in hand, farmers could mark the silage bags from the outside where the bad spots are (for example, the white dot in Figure 1). 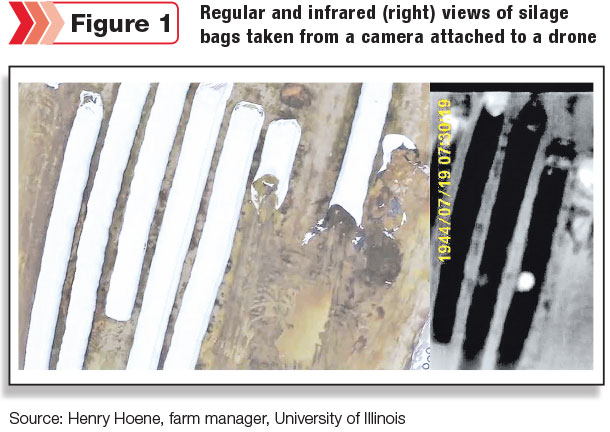 As they get closer to the marked line, a different destination for that material can be determined to avoid loss of milk production. Having higher aerobic stability (lower temperatures) can help maintain good-quality forage at the face of the bunk, leading to a more palatable feed and decreasing the amount of shrink associated with spoilage. PD

Dr. Phil Cardoso is with the University of Illinois Department of Animal Sciences. He can be contacted by email.