CAFOweb By Glorieta Geoscience California dairyman Brian Medeiros won’t be keeping his subscription to CAFOweb, Internet-based software for nutrient forecasting and tracking offered by New Mexico-based Glorieta Geoscience, after test-driving it for more than a year for free. However, he says the new program remains on his radar for future use.

“The program is useful and handy. I ended up not using the program to the fullest extent,” Medeiros says of his one-year free trial of the program, which was a $2,000 value. “I feel like I didn’t give it a full shake.”

Finding enough of his own time to input irrigating data into the software in order to use the program’s analytics turned out to be Medeiros’ biggest roadblock. Medeiros operates a 2,500-cow dairy and farms more than 1,400 acres near Hanford, California.

At the beginning of the trial, Medeiros attempted to give his irrigators iPads and have them enter in their daily irrigation data directly into the software. Previously, irrigators were recording hand-written notes about how much greenwater they were applying to fields and turning them in to Medeiros. That information then had to be electronically logged in a spreadsheet for compliance.

He hoped the switch to an electronic recording method would kill two birds with one stone: Eliminate him having to enter in hand-written irrigation logs and simplify his state-required reporting for compliance with his nutrient management plan. Neither quite worked out like he planned.

First, Medeiros found the interface of the program, and the fact that it was in English, a little too complex for his Hispanic workers to navigate easily. He has since adopted a custom-made, cloud-based document that is in English and Spanish for his irrigators to use on their smartphones.

The digital file walks the irrigator page by page through what field was irrigated and what the flow meter was at the beginning or end of the session. It then dumps the information into a report with a time-date stamp. This alternative method of digital collection also increased the efficiency of compliance reporting, Medeiros says. 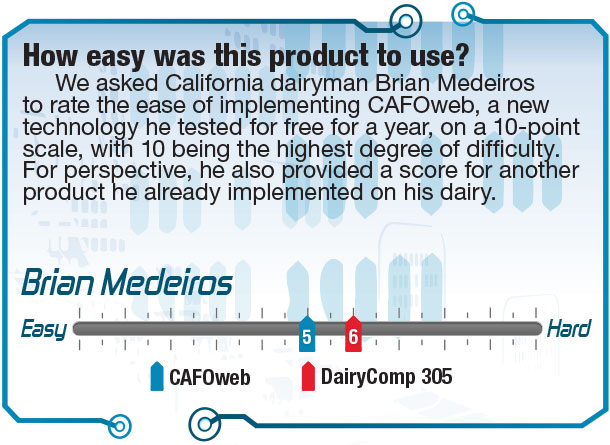 “For a dairy operator, the program worked fine,” Medeiros says. “However, it was not as simple for a field employee.”

Medeiros was impressed with the software’s analytical tools when the data input was complete and accurate.

“Once you get all the information into the program, the analytical tools work really well,” Medeiros says.

He was disappointed he didn’t get to fully test-drive the value of these functions. Medeiros suggests dairymen who sign up to use the software have a plan to keep up with data entry.

“I got behind with entering my data and then was overwhelmed,” he says. “You have to stay on top of inputting the data.”

CAFOweb’s executive director Tara Vander Dussen assisted Medeiros throughout the test drive. From experience working with other dairy producer clients, she says data entry is a time management challenge, not a technical one.

“Data entry is the hurdle in any new technology application,” Vander Dussen says.

Other dairy clients with multiple irrigators have opted to have employees turn in their reports to an office assistant who would input the data and advise the dairy owner when it was available.

“I think Brian was determined to do it himself,” Vander Dussen says. “In the end, he just didn’t have the time. In the future, I would recommend Brian have his nutrient management consultant or have us enter the data for him. We could do that. Then he could use the technical aspects of the program.”

Medeiros and Vander Dussen also discussed how the program could help with the dairy’s regulatory reporting requirements during the test drive. While providing state-specific reports is still something Vander Dussen says may be included in future versions, it’s not the highest value the program can offer a dairyman.

“We don’t want CAFOweb to be just a system for generating a print report,” Vander Dussen says. “We really want it to be an analytical tool to analyze your irrigation data and look at what crop needs the nutrients from your dairy the most. We want it to go beyond the reporting requirement to actually be a management tool.”

The program, she says, can add lots of value to money that dairies already spend on nutrient management.

“Dairymen are collecting a lot of nutrient data. It costs a lot of money for sampling and testing. Input that data into CAFOweb and use it to make management decisions,” Vander Dussen implores. PD