Increasing nitrogen efficiency and income over feed costs (IOFC) represent goals nutritionists and dairymen alike strive for. In April 2015, the cost of metabolizable protein was $0.64 per pound for the Midwest U.S. For a cow producing 80 pounds of milk at 3.1 percent milk protein, this represents a nutrient cost of $3.59 per day. The question of whether protein supplementation can be reduced or optimized to improve IOFC should routinely be considered.

Improving N efficiency of milk production also merits attention as the industry continues to receive scrutiny for environmental N emissions. Only 25 percent of dietary N intake is converted into milk protein, while approximately 75 percent is excreted in urine and feces. 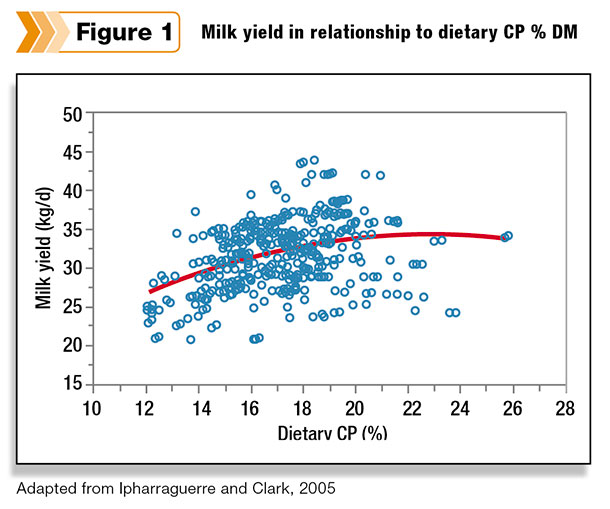 Metabolizable protein is the summation of amino acids absorbed by the cow and originates from rumen micro-organisms, digestible RUP (“bypass protein”) and endogenous protein.

Accurate prediction of metabolizable protein for diet formulation is critical when formulating for lower dietary CP diets.For example, a 17.5 percent CP diet is generally in excess for supply of amino acids, hence a large safety factor.

However, if the diet is formulated for 15.5 percent CP, then the safety factor is much smaller. The risk of inaccurate predictions causing less-than-optimal milk production due to deficiencies in one or more essential amino acids is much higher when feeding a low-CP diet given the smaller safety factor.

First, variation of RUP and digestible RUP of blood meal is quite high. Research at Ohio State University showed a range of 28 percent to 100 percent for RUP (percent CP) and 6 percent to 100 percent for intestinal RUP digestibility across 265 samples of blood meal. Blood meal is one of the most variable protein ingredients utilized in dairy rations despite being often a cost-effective source of digestible lysine.

The characterization of blood meal by some nutrition models is biologically incorrect as well. The feed libraries within CPM- and CNCPS-based models describe blood meal as containing appreciable concentrations of plant fiber. As you can guess, blood meal should not contain any plant fiber; therefore, measuring fiber in blood meal is impossible.

This issue arises because some nutrition models estimate protein digestibility using the fiber detergent model. While this type of assay might work well for forages, along with some protein feed ingredients, this approach for animal proteins is biologically incorrect and impossible to measure with a laboratory assay.

We have relied on a system of outdated static library values for common feed ingredients and commercial protein product values submitted by their respective companies. These issues of potential inaccurate characterizations of feed ingredients have likely prevented formulation of low-CP diets by some nutritionists.

Several research groups have put forth assays for measuring protein digestibility of feed ingredients. However, particle size of feed ingredients, solubility of protein, ammonia recycling (in vitro fermentation) and mobile bag limitations were documented issues of previously proposed assays. Also, if an in vitro assay cannot predict in vivo cow production responses, then the usefulness of this assay should be seriously questioned.

Researchers at Cornell University recently developed a novel assay for determination of protein intestinal digestibility that does not rely on the fiber detergent system, addresses some of the issues with past in vitro methods and has the ability to be adopted by commercial labs.

Do in vivo cow responses validate the Ross uN assay? This question was the premise of a recent production cow trial that attempted to validate the Ross assay’s ability to determine digestibility of protein ingredients.

The cows consumed similar amounts of DMI and crude protein; however, energy-corrected milk yield was 4.2 pounds higher for the high digestible blood meal treatment (p less than 0.01) (Table 1). The cows also had increased yields of fat and protein (p less than 0.05). 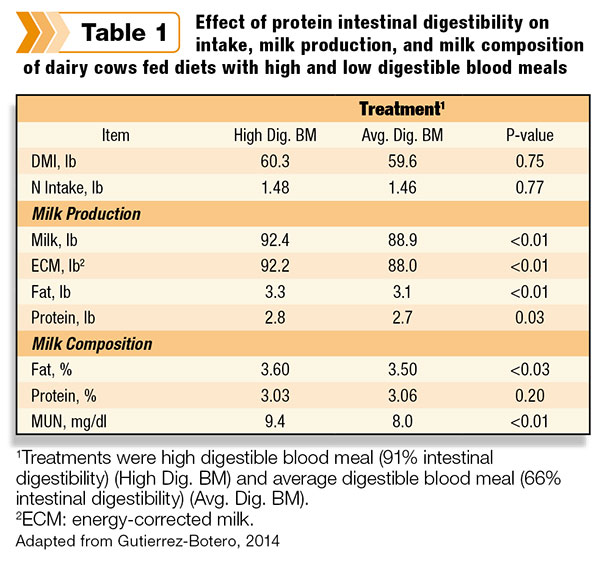 In summary, accurate characterization of protein ingredients is critical to improve our precision and confidence of model predictions to optimize protein supplementation.

The recent introduction and validation of the Ross uN assay represents an important tool now available to the dairy industry. The ability to better understand protein ingredients provides the opportunity to reduce protein supplementation and also improve our economic assessments of particular feeds.

Given the cost of protein supplementation, why not consider utilizing this new tool to reduce your protein safety factor, improve IOFC and increase N efficiency on your dairy? PD