Niels Bastian Kristensen, a former professor with the department of animal health and bioscience at Aarhus University, Denmark, and current researcher with SEGES (national extension office for the advisory system in Denmark), is the founder and a proponent of a concept called “compact TMR.”

Its goal is twofold: to mix the feed so completely that sorting is eliminated or held to below 2 percent refusals, and to mix the feed well enough that the fibers are physically opened during the high-impact mixing process and mixed sufficiently to eliminate sorting.

At a level of 2 percent refusals, cows have access to sufficient feeds, but Kristensen says, “Orts (refusals) and feed mix fed have to be indistinguishable; if this is not the case cows have sorted the ration, and first and last cows feeding at the feedbunk have been offered different rations.” 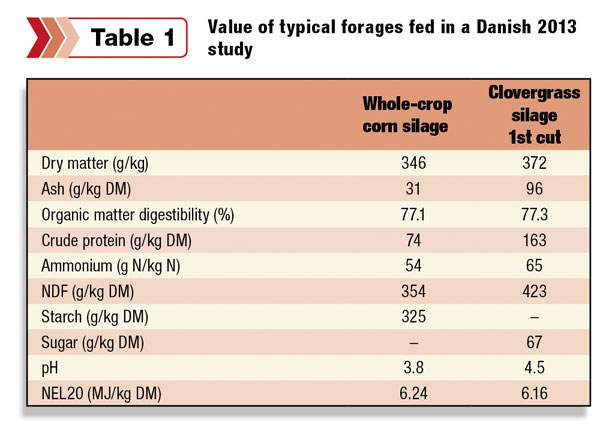 Kristensen says TMRs in general have been severely undermixed in the past because producers believed mixing negatively impacted physical structure and would negatively affect rumen function.

He says the underlying learning from 20 years of research is that nutrition is permissive, i.e., the aim for a dairy ration is to balance the substrate for rumen microbes with a physical form that allows all cows to eat to their needs. Kristensen maintains that the key to stability is a ration functioning as one feedstuff that cannot be sorted. Compact feeding acts as one feedstuff.

This can easily be 10 times higher with ‘standard’ mixing.” Feed push-up, Kristensen says, is typically very different between farms before implementing compact TMR but can be reduced to three times daily with compact TMR because cows stop moving the feed.

How is it done?

Compact TMR is based on moistening dry components of rations, a step-wise mixing protocol and high-impact mixing (or much longer mixing times than traditionally used). We work with a three-step mixing protocol in standard vertical and horizontal auger mixers: soaking phase, structuring phase and finishing phase.

With this protocol, dry components are moistened to better adhere to the fibrous particles, and step-mixing is used with much longer mixing times than were used in the past.

Although each dairy is different, Kristensen says in a 34 cubic-meter mixer, if the commodities are easy to soak, the soak time equals about one hour, then the ration is mixed for about 45 minutes and fed within 15 minutes. At that rate, a farm can run 12 mixes in 24 hours, equal to about 204 tons of feed (and remember, it’s heavier feed than the normal TMR).

Kristensen says during the soaking phase, the amount of water required depends on the ration and on the dry matter of silages added to the mix. A good starting point is to use equal amounts of water and dry feedstuffs.

Most pellets will burst when soaked for one hour, but more-resistant pellets (like sugar beet pulp pellets) require eight to 12 hours. Kristensen generally recommends soaking all dry components for multiple hours. He says adding too little water is a much more common problem than adding too much water, but adding water to silages should be avoided as this reduces stability.

Soaking not only dissolves pellets, it also helps dry components to adhere and ensures the final mix achieves high density. He notes other feedstuffs like molasses, sugar beets and distillers grains can provide moisture and increase density of the mix.

Kristensen says, “One of the really important issues is to monitor the mixer. We have had to modify many mixers in order to keep up the flow within mixes that are both heavy and have a finer structure.” Kristensen says traditional Danish dairy rations are based on grass-clover silages and corn silages. In the structuring phase, the mixer holds all components except for corn silage.

The purpose of the structuring phase is to cut and open all fibrous components and get them to stick to all concentrate components. To achieve sufficient mixing, the mixing time is increased to 20 minutes (with typical 25 to 30 rpm vertical augers) in this phase.

After the structuring phase, the corn silage is added to the mixer. Kristensen says, “Many mixers are challenged by the physical properties of the mix in the final phase, especially vertical auger mixers.” He says many mixers need modifications with auger shares or other devices mounted on the augers to handle the heavy mix.

Following is a discussion with Kristensen:

How is it fed?

Truly ad lib feeding is essential, meaning feed has to be available for all cows 24 hours per day, and there will always be at least 2 percent refusals.

How long has compact feeding been around?

I started implementing the concept in 2012, and it has been in more general use in Denmark since 2013.

What is the adoption rate?

Not all dairy farmers in Denmark are using it, but every farmer has been discussing it during the past two years. I still think we have more of a movement toward compact TMR when we talk about the industry in general.

Does this change production practices of forages?

Yes, the refocused attention to particle structure in the TMR has affected the view on chopping, especially with grass silage but also with corn silage. It is important to remember when we discuss forage that we use a lot of perennial grasses in Denmark. Many farmers have reduced the chop length in grass and corn.

What impact doesthis have on milk production?

In our trials, we have observed an immediate response (within 30 to 45 days) of between zero and 4 kg (about 9 pounds) energy-corrected milk (ECM) per cow. In a trial from 2013 including 11 farms, we observed an immediate response that was 1.5 kg (about 3 pounds) ECM per cow increase on average. However, this short-term effect is not the main thing.

The long-term stability of the herd in combination with the ability to sustain higher production in new-lactation cows was of much greater value. We have a group of herds starting with compact TMR in 2013 that have increased production by 1,500 to 2,000 kg (3,306 to 4,409 pounds) ECM per cow during the past two years.

What were management differences at the feedbunk between dairies where production increased and those for which production did not increase?

The big difference is that cow numbers at the feedbunk decreased and less time was used to push up the feed. Another important thing is the focus on always having leftovers. No other major changes in feedbunk management were noted.

The compact TMR concept has been developed in collaboration with practical farms, but this development was founded on research showing that our current advice on physical structure problems with respect to feed mixing was misguided.

What about particle length to stimulate cud chewing? Is that impacted?

Therefore, compact TMR is a concept that make use of this knowledge and focuses on the real problems in feeding dairy cows, of which feed sorting is of major importance. Sorting makes cows spend far too much time at the feedbunk (damaging hooves and inducing stress on the herd). Feed sorting destroys the links between formulated ration and actual ingested ration by the individual cow.

Mike Hutjens, extension dairy specialist with the University of Illinois, had an opportunity to visit a dairy farm that was feeding the compact TMR in Denmark. Hutjens says, “The compact TMR appears like a wet byproduct feed, such as wet corn gluten or wet brewer grain-like consistency, which I could ball up with no free water squeezed out – estimated at 35 percent dry matter.”

He says little physical roughage form was visible in the compact TMR, and the ration was smooth to the touch. The corn silage was chopped to 9 mm lengths with a future suggested guideline of 4 mm. (For comparison purposes, the theoretical length of cut in the U.S. with shredlage is 20 to 26 mm.)

Hutjens says he would need to see more controlled results before recommending the process in the U.S. and notes the grass silages of Denmark are ensiled very wet, at about 35 percent dry matter, and corn silage is chopped wetter in Denmark than in the U.S. due to growing days and heat units.

Alfalfa availability in Denmark is also limited. Hutjens also says there would be concerns in the U.S. with secondary fermentation during hotter seasons of the year with the compact TMR system. PD