The high value of low heritability

The brutal fact is that heritability is often misunderstood.

The traits most commonly referred to as low heritability are the health traits: productive life (PL), daughter pregnancy rate (DPR) and somatic cell score (SCS). The most common misconception is that although the predicted transmitting ability (PTA) for PL or DPR is high for particular bulls, the heritability is so low that progress will be minimal in a single generation and slow over time.

Even among some of those in the A.I. industry, heritability has been described as the probability that the resulting progeny will inherit a trait. So it’s no surprise that dairy producers push back on what benefits even exist for them by selecting for low-heritability traits.

Common adverse reactions include statements like, “We will make less progress” or “We won’t make a noticeable difference” or “It takes so many generations to actually change those traits.”

This hesitance means it’s time to clear up the confusion on low-heritability traits. To do that, we’ll take a look at what heritability actually means and prove that the economic value of a trait is much more important than the heritability.

Heritability is the proportion of the total amount of variation in a trait between groups due to genetics.

What about pregnancy rate differences? Management and environment account for the 96 percent majority of variation between daughters, so the influence of genetics is minor at just 4 percent. Thus, DPR has a heritability of 0.04. But in spite of this, it would be wrong to conclude that DPR is insignificant as a result.

When dealing with genetics, we need to remember that accuracy shows through when we evaluate within a herd. From there, we evaluate within a specific lactation group and then within a specific time of freshening. This means that we reduce the impact of management and environmental differences in our comparison. We effectively have more control over the evaluation to better isolate the real impact genetics makes.

Even though the overall heritability is low for a trait like DPR, within a given environment and situation where all cows are managed exactly the same, the true differences between genetic lines are much clearer.

This concept shows through when you take a closer look at our previous examples in “The proof is in the numbers” article.

The proof sheet and heritability

The genetic value reported in a sire’s proof, which is more commonly called the PTA calculation, already takes the heritability of a trait into account. This means the PTA value for both the low-heritability and high-heritability traits indicates the amount of gain or loss that can be made in a given generation. So the PTA is the progress you can expect to make with your selection.

It isn’t just theory, either. With bulls at that elevated level for DPR, we expect more pregnant cows, faster.

Take this real-life example from a 1,500-cow dairy with very good reproductive performance. We’ve separated out first-lactation cows into quartiles by their sire’s DPR. It’s clear to see that the high-DPR sires create daughters that become pregnant more quickly than the daughters of low-DPR sires.

The same goes for PL. Despite the low heritability at less than 9 percent, PL can make a real, noticeable difference in your herd.

Figure 1 compares how long the daughters of the industry’s best 10 PL bulls and daughters of the industry’s bottom 10 PL sires will last in a given herd. You can see that a higher percentage of high-PL daughters, represented by the dark blue bars, remain in a herd than their low-PL counterparts. Selecting for the lowly heritable PL will certainly create healthier, longer-living cows in your herd. 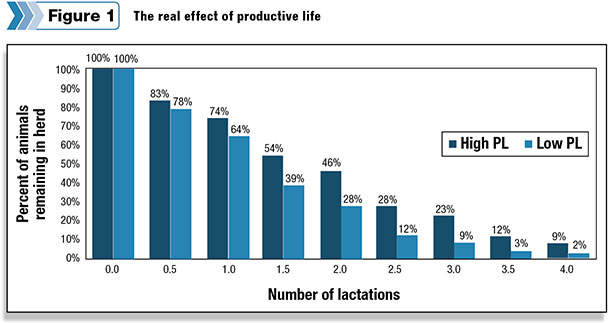 As a progressive dairy producer, you should not let confusion about heritability prevent you from using the genetic tools to make improvement in your herd. Health traits are economically important, and making improvement in these areas can have a huge economic impact.

There are many traits that have a very high heritability but no economic importance. In other words, we can make a lot of progress for these traits very quickly, but it will not make a more profitable cow.

A couple of examples are coat color and stature. Coat color has a heritability of 100 percent because it is completely controlled by genetics. Another example is stature, which has a heritability near 0.5. Even though we can make cows a lot bigger, or a lot smaller, or red in one generation, what is the economic value of that?

By comparison, the economic value of more fertile cows that last longer because of fewer metabolic problems, fewer cases of mastitis and less calving difficulty is clear to see. These genetic features make a more profitable production unit for each and every farm.

When you set or re-evaluate your genetic plan, take the following tips into account to maximize progress in the direction of your goals:

1. Define your goals . You can start by identifying the most common reasons for culling in your herd to determine the most significant health problems on your dairy. Is it reproduction, milk production, mastitis? This information gives you the basis to make breeding decisions that will have a positive impact.

2. Choose your tools . Health traits offer dairy producers some powerful tools to help correct for low reproduction, metabolic problems, high incidences of dystocia and the like. Identify how important each is to you and place a proportionate emphasis on these traits when choosing the group of sires to use on your dairy.

3. Customize the solution . Because industry-standard selection indexes put different and continually changing weights on health traits, don’t assume they reflect your individual goals and needs. Work with your A.I. rep to make sure your genetic plan is customized to your situation and goals. PD