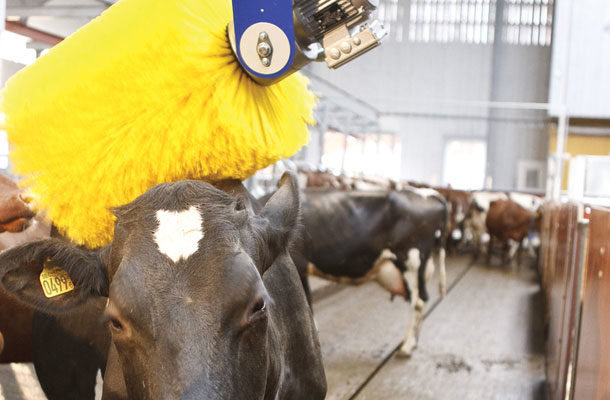 Making the case for cow brushes

As farmers struggle to maintain the proper level of animal care without breaking the bank, an item which can potentially improve profitability while increasing cow comfort is a welcomed relief. Specifically, adding a cow brush to the pen could increase milk production, reduce disease, decrease property damage and alleviate stress.

Eric Metzger is the solution manager – service and original parts for DeLaval Inc. and has 13 yea...
Email Eric Metzger

There is the anecdotal assumption that increased comfort leads to increased happiness, which then translates into improved production. Cow happiness may never be scientifically proven; however, a 2009 Cornell University study that was performed at Sprucehaven Farm and Research Center demonstrated that the addition of cow brushes did improve milk production.

The most dramatic increase was shown in second-lactation cows. The average increase in this group was 1 kilogram (2.2 pounds) per cow per day. Depending on the size of the herd, the ROI from one or more brushes could be almost immediate.

A hypothetical example is given in Table 1 . This example assumes an 80-pound-per-cow average with milk prices at $16 per hundredweight. It is used for illustration purposes only, as actual milk production will depend on several variables.

One hypothesis to explain the increased production is cows that walk to use the brush are more active and therefore more inclined to visit the feedbunk. Additionally, active cows utilize ketones more efficiently and may experience less feed intake reduction due to high ketone concentration in their serum.

Another hypothesis is cow brushes increase blood circulation overall, which positively affects circulation to the udder. This could explain the increase in daily milk yield, yet no obvious reason existed to explain why it would not consistently affect cows in different lactation groups.

A more pronounced finding of the study was the immediate drop in cases of mastitis for second- and higher-lactation cows. In pens of 100 cows in their third lactation or greater, 39 cases of mastitis were observed in the control pen, while only 24 cases were observed in the pen outfitted with a cow brush. This is a difference of more than 30 percent.

The reason for the result was not clarified, but an educated guess points back to improved activity. The researchers speculated that active cows walk more and are lying in their stalls for a shorter period of time. This may lower their exposure to bacteria present on the stall’s surface.

Additionally, the increased grooming behavior may lead to cleaner skin by reducing the number of parasites and organisms on the cow’s coat. Although the brush does not reach the udder, it reaches the hind areas. The researchers speculated that as a result, this could lower exposure of the mammary gland due to a general reduction of dirt on the animal.

Whatever the cause, reduced cases of mastitis lower the farm’s operating costs. It is estimated that on average, one case of mastitis can cost a producer between $200 and $250 per cow. This cost takes into account approximately 50 percent of forgone profit in lost or discarded milk as well as veterinarian bills and medication.

Additionally, an estimated 3 percent of culls per year will be due to mastitis with replacement heifers costing roughly $2,250. Mastitis can also lead to reduced reproductive performance which may be difficult to quantify.

A cow’s natural instinct is to groom herself and others. This social behavior allows the cow to bond with members of the herd and reduces the impact of the dominant to submissive hierarchy. Not wanting to wait for others to groom her, a cow will rub against whatever object is close at hand. This could easily mean damage to a corral, stanchion, fence or water trough.

In the last 20 years, companies in the dairy industry have developed cow brush systems to promote this instinct and reduce accidents or abnormal wear and tear on the facilities. Ultimately, this enables cows to focus their energy on something that is relatively low-cost when compared to other items on the farm.

Besides increasing production and reducing costs, cow brushes are a natural stress reliever. Cows are creatures of habit, and anything that disrupts the routine has the potential to induce stress. Disruptions could occur due to new cows, equipment or employees. In a fast-paced dairy, cows rushed between pens could also suffer stress.

When a cow is stressed, she is more likely to fall back on her natural instincts as a coping mechanism. If she does not alleviate that stress, she may behave erratically, which could present a danger to workers. If she senses stress in or around the parlor, she may avoid entering, kick off the cluster or refuse to let down her milk.

There is concern that due to a cow’s hierarchical nature, not all of the herd will benefit. However, since a brush system works faster than a cow rubbing itself, the alpha cows do not dominate it as much as they would a fence post or other object. The brush allows them to cycle through so the non-dominant cows receive the same relief.

Some of the benefits listed previously should not be limited to the adult members of the herd. The farm’s most fragile members will also benefit from the addition of a brush. When a calf is given access, it is socialized earlier and with less stress. The brush also helps reduce incidents of parasites such as ringworm.

When a calf stays healthy, it is able to grow faster, improve its weight gain, potentially develop earlier fertility and increase milk production later in life. However, a calf should never be given access to a brush designed for an adult. There are smaller brushes on the market, with the same functionality, which are built specifically for calves under 1 year old.

Producers who want to increase productivity should seriously consider cow comfort, specifically cow brushes. Current versions use less energy than their predecessors for decreased operating costs. They are safer than prior models and stop when they sense abnormal resistance; however, it is still recommended that the brush not be used for animals with tail hair longer than 3 centimeters (about 1.2 inches).

Because cow brushes are used approximately 75 percent of the day, they take a lot of abuse. Any producer considering an installation should invest in a durable product that is easy to clean. Also, a good rule of thumb is to install one brush for every 60 cows and replace the brush head once a year.

Most producers would not claim to lead a pampered life, and therefore the thought of installing cow brushes may not occur as a viable alternative. However, enriching a cow’s environment could lead to increased milk production, reduced disease, decreased property damage and alleviated stress. Consider it an example of “if you scratch my back, I’ll scratch yours.”

References have been omitted due to space but are available upon request. Click here to email an editor.