Avoid too much of a good thing: protein

Dairy producers and nutritionists understand the importance of providing adequate levels of nutrients in dairy cow rations. However, it is possible to provide too much of a good thing, which can lead to some undesirable consequences.

Nevertheless, the reason for feeding protein in the first place is to supply enough protein to meet cows’ requirements for milk production. So where is the sweet spot? The extent to which the protein can be reduced in the ration depends on the ingredients and supplemental sources of protein available.

Protein from feed ingredients serves two roles. First, part of the protein from each ingredient is degraded in the rumen to serve as fodder for the microbes. Second, some protein escapes, or bypasses the rumen, and provides additional protein to the animal in the small intestine, adding to the supply provided by the rumen microbes.

Crude protein measures the total nitrogen in the feed ingredient (what goes in the mouth) but doesn’t necessarily accurately measure the value it provides to the cow. Rumen-undegraded protein (RUP) and rumen-degraded protein (RDP), on the other hand, paint a better picture of what’s available for rumen microbes.

In the past, protein solubility has been used as a method to estimate RDP. However, recent research shows soluble proteins are not always degraded in the rumen, and some of the soluble protein actually provides RUP to the cow in the small intestine.

Thus meaning that only equating the insoluble portion of the protein that bypasses the rumen to RUP will provide an underestimation of the true RUP value of the feed ingredient. This is illustrated in Table 1. Less than half of the soluble protein in canola meal and linseed meal is broken down in the rumen. 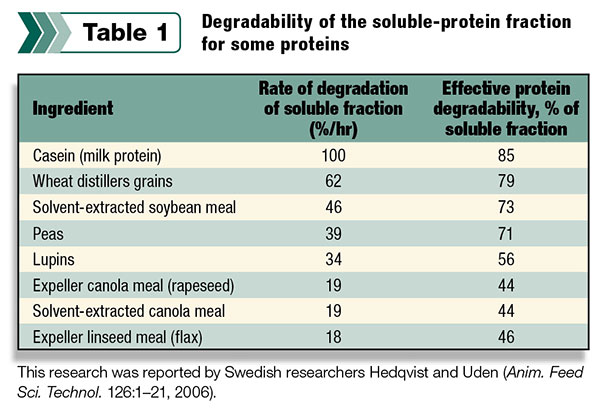 This has given new life to some proteins such as canola meal, which was once believed to provide very little RUP. With this new information, we now know less crude protein can be provided in the ration in order to supply sufficient RUP to the cow. New methods are currently being developed that will allow nutritionists to better predict protein degradation and reduce overfeeding of protein.

Better understanding of the role of RUP is key to reducing the overall amount of protein supplied in a ration and therefore to controlling feeding costs.

Let’s review an example provided in Table 2. In this study, the researchers formulated four diets, all consisting of the same basic ingredients. Protein sources were added to bring the level of protein in the diet up to a uniform 16 percent. 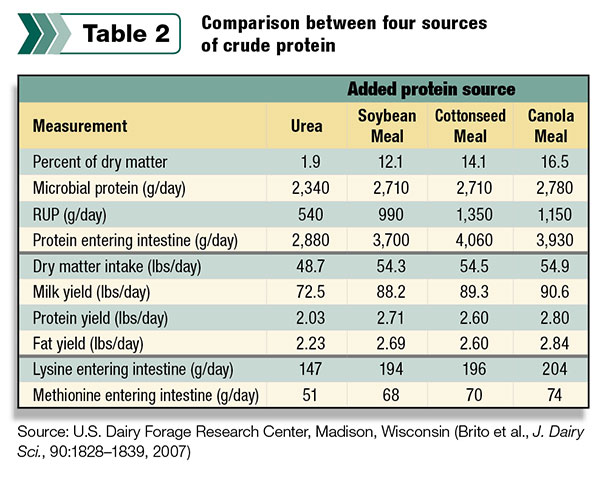 The proteins compared were urea, soybean meal, cottonseed meal and canola meal. The amount of protein entering the intestine from the combined microbial protein and RUP is shown in Table 2. All four total rations provided 16 percent crude protein, but urea provided the least protein, and cottonseed meal provided the most.

Milk yield was much lower for the ration with urea than the diets with added plant-source protein. Fat yield was the highest with the diet containing canola meal. Although the cottonseed meal diet provided the most protein to the intestine, cows given the canola meal diet produced the highest level of milk protein.

The researchers suggested this was due to a better balance of amino acids from canola meal. For example, the amino acids lysine and methionine were available in the highest concentrations in the ration with canola meal.

The correct balance of RUP and amino acids allows cows to produce milk more efficiently. This is readily noticed in the milk urea nitrogen (MUN) levels. High MUN levels are evidence that cows use energy to synthesize MUN and get rid of excess unbalanced or unusable crude protein. This is an economic detriment, as that energy could otherwise be used to synthesize milk.

An additional cost of overfeeding protein is in nutrient management. Excess protein results in more wasted protein, which is lost in urine and feces as nitrogen. Many jurisdictions are now regulating the amount of nitrogen that can be added to soil, meaning producers are facing restrictions when it comes to spreading manure on their property, which results in an additional cost for the farm.

Direct costs, such as the cost to add an ingredient or the cost to dispose of waste products, add up and can be profit robbers for dairy producers. Formulating more efficient, lower-protein diets can therefore be an important consideration in farm management. PD

Brittany Dyck is a nutritionist with Canola Council of Canada. She can be contact by email. Essi Evans is owner of Technical Advisory Services Inc. She can also be reached by email.