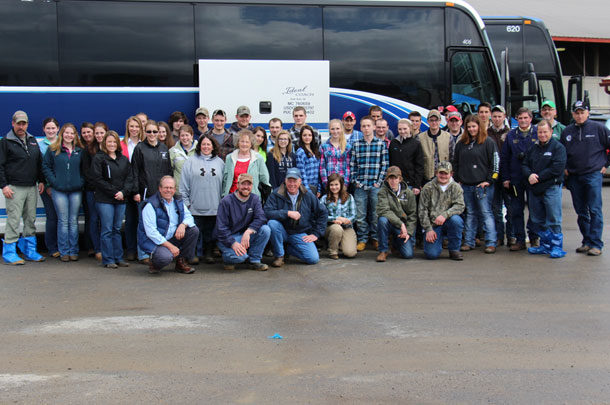 Next generation inspired by Dairy Leaders of Tomorrow farm tour

Editor’s note: Dylan Coleman is a participant of the Dairy Leaders of Tomorrow program, funded through the Center for Dairy Excellence Foundation of Pennsylvania, and a senior at Lancaster Mennonite High School in Lancaster, Pennsylvania. “If you have a passion for agriculture, and that is what you love, stick with it! Don’t ever let someone tell you that you can’t do something.” That is just one of the many bold and powerful statements made by Sherry Craig from Murmac Farms that will stick with me for the rest of my life.

I am currently a senior at Lancaster Mennonite High School. I have attended the Dairy Leaders of Tomorrow tour for all three years. I have enjoyed each of them, but also have been greatly impacted by the tours.

This year’s tour started out with a longer drive time and many more people on the bus than in past years. However, it gave us all the more time to connect and learn about people from different areas with diverse operations. The first stop of the day was Reinford Farms Inc., where they currently milk 560 cows and farm 1,200 acres, including rented land.

Steve and Gina Reinford are the owners of Reinford Farms, and their three sons, Chad, Drew and Brett, are all involved in the operation. Previously, all three sons had jobs elsewhere, while Steve and Gina were managing on their own. As the business grew, the farm had the income capacity to support more families, and the three boys felt the farm was where they belonged.

While the business is not yet a partnership between the parents and the sons, the family is working toward that transition, and the invitation to become formal partners is there when the boys want it. With Steve as the general manager overseeing all facets of the business, the three sons each have their unique spot on the farm, and they all enjoy it. Chad manages the crops; Drew is in charge of nutrition; and Brett is the office manager.

Their animals are housed in four different freestall barns – two 300-cow barns and two smaller freestall barns. Their last expansion included one of the 300-cow freestall barns this past year. With room to grow, they project to be at almost 1,000 milking cows in the next three to four years.

The milking setup at Reinford Farms is a 28-stall carousel parlor built in 1998 that allows them to milk almost 120 cows per hour. It was one of the first rotary parlors built on the east side of the Mississippi.

Another unique aspect of this farm is the methane digester. At peak production, it can produce 140 kW per hour, and to keep it running most efficiently, they add organic food waste to the digester to produce more gas. All extra electricity is sold back to PP&L, and excess heat produced from the generator is used to heat all the farm’s water, the house and barn shop, and to dry the stored corn.

The second stop made on the tour was Murmac Farms LLC. At Murmac, they milk 1,340 dairy animals and farm 1,100 acres of land. After arriving, Sherry Craig gave an inspiring and motivational speech where she talked about the importance of agriculture and how she was so glad to see all us kids there learning.

Sherry and her two children, Brian and Pamela, are all in a partnership together, and each play an important role on the farm. Sherry is semi-retired but still oversees the farm; Brian manages the dairy as well as the crops; and Pam manages all finances (previously done by her mother) and helps out with the dairy.

Tom and Sherri Craig established the farm in 1980 with 80 cows, after they both came out of the Marine Corps. Since that time, the farm has grown extensively, and in 2007 when the children came back to the farm, they decided to once again expand and build a new facility.

A majority of the milking animals is housed in two 800-cow barns, along with other smaller barns for pre-fresh and other aged animals. They are using a double-20 parallel milking parlor with an Xpressway reel release.

In addition, the two 800-cow dairy barns use a recycled flush system to clean alleyways. The manure and bedding then run into a gravitational sand separator. From there, the water is pumped into a lagoon and the sand is reused for bedding.

Both farms have a very similar history behind them. Both started with a small herd, and both have grown to become a business that can support the kids coming back and eventually taking over the farm. It was very inspiring to see how both farms could diversify and grow enough to be able to support those oncoming families and how they both continue to expand to be even more successful.

One of the things that I took away from this year’s tour was seeing a family come back home to the farm and use each other’s gifts and talents in the business, but at the same time, they worked together so smoothly and made the business run efficiently. I also learned from the challenges they shared and how they overcame them.

Besides visiting the farms, getting to know people from all aspects of the industry is another huge part of why I go on this tour each year. Getting to network with the many people, whether from colleges or the industry, is always valuable, and I learn something from each one of them.

I would highly recommend the Dairy Leaders of Tomorrow tour to anybody who has an interest in dairy, not only to learn from different farms with different types of operations, but also from the many people that you meet and talk to during it. PD

Want to see more of the tour? View the slideshow.