This month’s VAS DC305 tip of the month is on transition. How well animals transition will greatly affect how they will do in their next lactation.

Poor transition will not only affect the production of the animal for the next lactation, but will also affect the reproduction, somatic cell count and lifetime in the herd. All are very important and lead to lost income.

DC305 has many tools to assist in monitoring and analysis to figure out why transitions are poor and where improvements could be made. This month we are going to discuss how dry period length and somatic cell count can affect how well a cow transitions into their next lactation.

Dry period length is important because if the animal has too short of a dry period, it does not allow enough time for mammary gland involution. If too long of a dry period, there is potential for excess body condition, causing transition issues. The studies have shown the optimal dry period is 55 to 65 days, with a target of 60 days.

You can see the milk difference due to short or long dry periods on the graph from Penn State (see Figure 1). You are able to see your distribution of dry period length in DairyComp by going to GUIDE and then the TRANSITION tab. Under the Dry Periods, click on “Does the pattern of previous dry period length match the management plan?”

Click on the images below to view them in more detail. 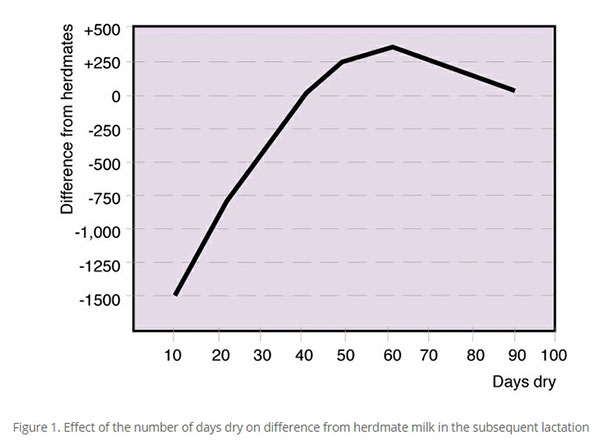 Endotoxins are released during mastitis, which increases the level of prostaglandin from the uterus, resulting in embryonic death. On some dairies, udder health can be the bottleneck restricting profitable reproduction performance. Looking at the percentage of animals that are over 200,000 when they freshen is a way to see where you are at and if there is improvement over time (see Figure 3 below).

Another key area to examine is the dry period because animals should not be contracting mastitis during this stage. The dry period is a time you want to try to cure animals that had a high somatic cell count before dry-off. You do not want animals to become infected. The graph in Figure 4 (below) shows you this. 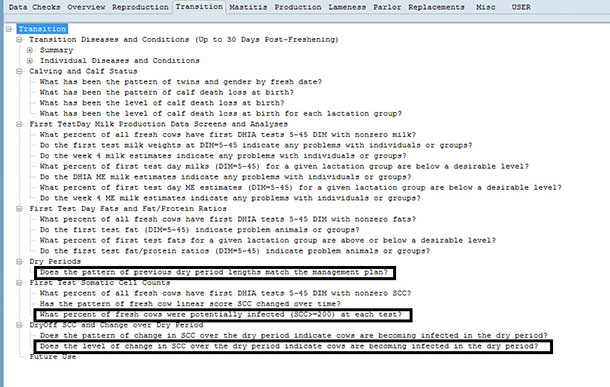 Getting your animals off to a good start at the beginning of their lactation is extemely important, so keep dry periods at an optimal number of days, take action to cure high somatic cell count cows during the dry period and prevent animals from becoming infected to ensure animals are healthy and ready to produce for you when they start their new lactation.