As the dairy industry suffered a huge economic blow in 2009, so did Wisconsin’s agriculture industry. Total receipts from the state’s farm marketings dropped by an estimated $1.8 billion (18 percent) in 2009, with nearly 80 percent of that decline resulting from much smaller milk checks. Coincidently, the equity of the state’s dairy industry also fell by $1.8 billion last year.

This information was released in January by the faculty of the Department of Agricultural and Applied Economics at the University of Wisconsin – Madison. Each year they analyze the events that took place and their impact on the agricultural economy in the state. 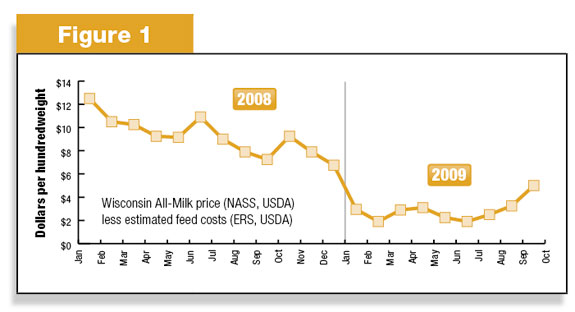 Previously, Wisconsin experienced two strong years of net farm income up above the U.S. average. Even with cheaper fertilizer, fuel and feed and higher government payments in 2009, net farm income in the state plummeted 56 percent ($1.5 billion) from the prior year.

“By and large, we’re still strong,” says Bruce Jones, University of Wisconsin – Madison ag economist and one of the authors of the report. Wisconsin’s farm sector was on solid ground at the end of 2008 with a debt-to-asset ratio of 0.11 – the lowest level in 50 years.

However, the 1,400 commercial farms responsible for the bulk of products sold had a higher ratio of 0.23. The 60,000 farms with less than $100,000 in sales accounted for almost half of the state’s farm assets, but less than 30 percent of the debt and had a debt-to-asset ration of 0.064. Dairy farms in all categories had higher debt-to-asset ratios and were more financially vulnerable heading into 2009 than other farming operations.

1) The drop in milk prices resulting in an operating loss of roughly $5 per hundredweight.

Total asset values dropped by $1.6 billion and debt rose by an estimated $245 million, netting a $1.8 billion dollar loss of equity for the Wisconsin dairy industry.

The overall debt-to-asset ratio increased in 2009, but is still manageable, Jones says. Individual farms with ratios higher than average may be facing some serious financial challenges.

Farm inputs
In the report, Jones says fertilizer is generally half as expensive as the previous year. That is thanks mostly to cheaper energy prices. Lower crude oil prices also resulted in gasoline and diesel prices down, 10 and 30 percent respectively, from the prior year.

Interest rates were cheap as a means to keep credit available. Jones predicts the Federal Reserve Bank will keep rates down for some time to stimulate the economy. Affordable interest rates and available credit doesn’t mean all farmers will be able to obtain operating credit this next year. In order to extend a loan, the lender must be convinced the borrower will be able to generate positive cash flow in the near term.

Cash rents in 2008 and 2009 were up dramatically, which is not unique to Wisconsin, Jones says. Between 2006 and 2009, cash rents in Wisconsin rose about 25 percent, from an average of $71 per acre to $89 per acre. During the same period they rose even more in Iowa (35 percent), Minnesota (32 percent), Illinois (29 percent) and Michigan (28 percent). The growth in rents corresponds with the big gains in crop prices and probably won’t continue to rise as much as those prices begin to settle at new levels.

Relative to the cost of owning, the cost of rent is down to about a third, but that doesn’t mean it’s going to stay that way, Jones says. 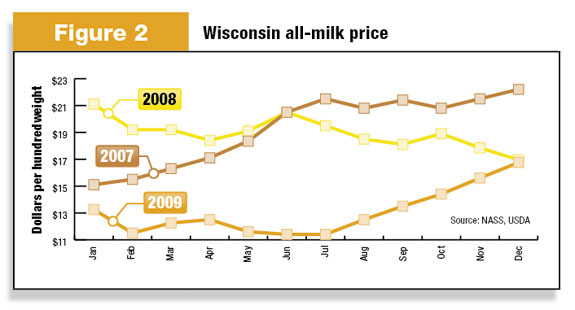 “We know that 2009 was maybe the worst financial stress since the ’70s or maybe the Depression. I give you a 100 percent promise that prices will be better in 2010.”

According to Cropp, 2009 was different than other declines in that decade. Earlier price drops were due to a relatively large increase in U.S. milk production. This plunge was due to a drop in demand. Domestic sales slowed, as did global exports.

A recovery of farm milk prices in 2009 required a reduction in milk production, thus cows were culled. Cow numbers in December were down 2.7 percent from a year ago. Most of the milk reduction occurred in the West where there was a much higher feed cost than in the Upper Midwest.

In contrast, Wisconsin continues to produce more milk. The state’s milk cow numbers were 1.257 million head at the end of 2009, up 0.4 percent from 2008. Milk production per cow in Wisconsin was 20,079 pounds, up 2.7 percent. This put Wisconsin’s total milk production at 25.2 billion pounds, an increase of 3.1 percent over 2008 and surpassing the previous record-high of 25 billion pounds set back in 1988.

Even though Cropp gives his 100 percent guarantee that milk prices will be higher in 2010, he says there’s a lot of difference in opinion as to how much higher. It will depend on milk production decline, improved domestic sales and growth in exports and the strength of which they occur.

Cow numbers will continue to decline as producers exit the business and the previous loss of equity slows expansion. Slaughter will remain high until returns over feed cost become much more favorable. Cropp expects cow numbers to drop below 9 million head before they start to increase again.

With lower feed costs and a greater return over feed costs, Cropp says milk per cow will increase about 1.8 percent. Of course, weather is always a factor and could have an impact on production.

On the demand side, the slow economic recovery in the nation may hamper growth of domestic dairy product sales. Thus far retailers have been offering specials on beverage milk, butter and cheese to attract shoppers. The low prices may even drive more restaurants to include cheese and butter on their menu items.

Retail prices will most likely increase as the farm price increases, but for now the USDA estimated a 1.1 percent growth in demand.

One early sign for market growth is that mozzarella cheese production is up 7.5 percent. Cropp says mozzarella is a good indicator because it’s sold fresh, not stored. Powder is also up, indicating a renewed interest in exports.

World supply and demand is tightening and there’s been a substantial improvement in world market prices in the last few months. USDA forecasts that 2010 dairy exports may be equivalent to nearly 9 percent of total milk production.

Increased domestic sales and dairy exports could boost 2010 sales of milk by nearly 3 billion pounds, which could strengthen dairy product prices and farm-level milk prices in 2010.

Milk prices should stay good through 2011, Cropp says, adding we should expect another downturn in 2012, but not as bad as 2009.

A policy change could alter this scenario, but he says there most likely would not be any changes before the 2012 Farm Bill. PD