Until recently, little research has been conducted on grass species selection or management of mixtures. The primary negative point with mixtures is not lower forage quality, but variable forage quality. The main cause of this variability is a variable alfalfa-grass ratio.

Although meadow fescue was promoted by a USDA Bulletin as early as 1909, it dropped out of use in the U.S. decades ago primarily due to reduced yield, compared to other grasses. It can be grown in areas suitable for timothy, and it is considerably more winter-hardy than tall fescue in northern environments.

Primarily grown for pasture use in recent decades, meadow fescue has considerable potential in mixture with alfalfa. Alfalfa-grass mixtures are as high or higher yielding than pure alfalfa, and feeding trials in New York and Wisconsin show that mixtures can be an excellent forage for lactating dairy cattle.

Meadow fescue has higher fiber digestibility (NDFD) than most other grasses grown with alfalfa in the northern U.S. Feeding trials across the U.S. show that a one percentage unit increase in NDFD increases milk production by 0.5 to 1.0 lbs/cow/day, and more than 1.0 lb/cow/day for the highest producing cows. Meadow fescue in combination with new reduced-lignin alfalfa varieties has the potential to produce a very high quality forage for lactating dairy cows.

Alfalfa-grass studies were conducted at several sites across New York in 2017, taking three to four cuts per season. Alfalfa comparisons included HarvXtra with one or more other higher quality alfalfa varieties. Alfalfas were sown with from three to seven grass varieties in binary mixtures, including meadow fescue, tall fescue, orchardgrass, festulolium, reed canarygrass and timothy.

One exception to this was Tetrax tetraploid meadow fescue, which was 7 percentage units lower in grass percentage than tall fescue at the one site that included both of these fescues. In general, grass percentage was excessive in 2017, averaging over 50 percent. A relatively wet growing season favored grass growth over alfalfa, especially on fertile soils.

Across three trials in 2017 HarvXtra averaged 4.8 percent higher NDFD (48-hour digestion) and 12 percent lower lignin, compared to other alfalfa varieties in these trials. Over the past two years HarvXtra has been consistently between 10 and 15 percent lower in lignin than other alfalfas, but NDFD differences are smaller and more variable.

Tetrax meadow fescue was significantly higher in NDFD at one site where it was compared with two other meadow fescues.

As the grass percentage increases in a mixed stand, less nitrogen is available for grass from alfalfa, and also more grass competes for the limited available N. Soil fertility also impacts crude protein (CP) content of grass in mixtures (Figure 1). 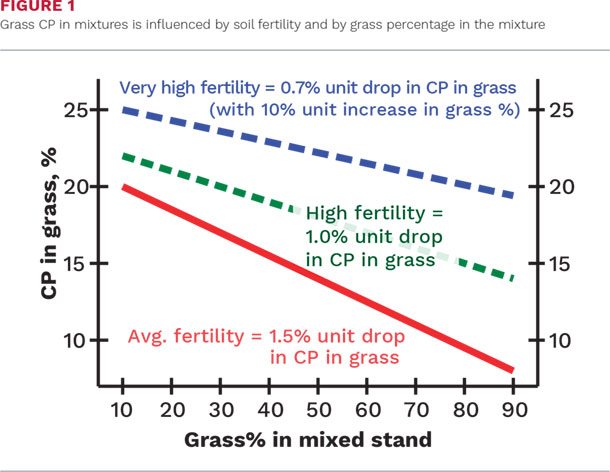 As the high CP alfalfa percentage decreases, grass CP decreases and total mixed forage CP drops correspondingly. However, CP remains at a sufficiently high level in the mixed forage, up to at least 40 percent grass.

Evaluating the benefit of harvXtra versus meadow fescue

It is possible to calculate the increase in NDFD from adding either HarvXtra or meadow fescue to an alfalfa-grass mixture (Figure 2). 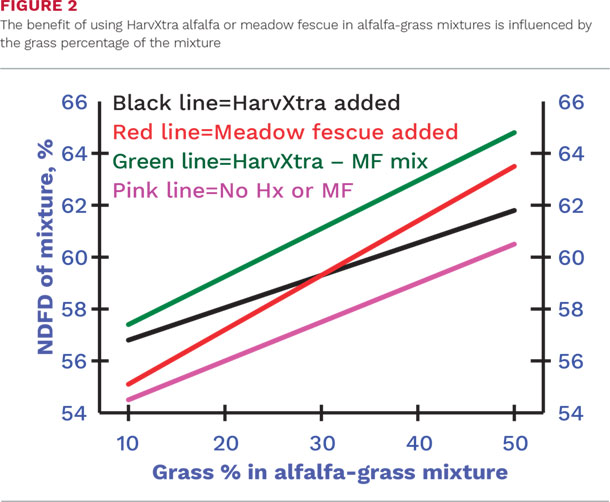 For three sites in 2017, average alfalfa and grass NDFD (without HarvXtra or meadow fescue included) was 53 percent and 68 percent. With a 30 percent grass mixture (optimum mix), using HarvXtra increases total forage NDFD from 57.5 to 59 percent, but including meadow fescue instead, also increases total forage NDFD to 59 percent.

Using both HarvXtra and meadow fescue in a 30 percent grass mix increases total forage NDFD from 57.5 to 61 percent, or a 6 percent increase. Average NDFD over three to four cuts per season in 2017 was determined by weighting NDFD for yields, so higher yielding spring-cut forage counts more in the NDFD averages.

Mixtures can increase both yield and quality of forage stands. Ideally we would like 20 to 30 percent grass, but grass percent in mixed stands is strongly influenced by environmental conditions. Average grass percentage of stands in the spring can be double that of the previous fall.

Grass CP content is impacted by the grass percentage of stands, as a limited supply of available soil N is diluted through increased grass production. As the amount of alfalfa in a stand declines, this also reduces the total supply of available N for grasses. Nevertheless, a mixed stand with up to 40 percent grass is still likely to have an acceptably high CP content.

Alfalfa-grass research was made possible by funding from the Northern New York Agricultural Development Program and the New York Farm Viability Institute.