Brad Nelson
An extended warranty with unlimited miles good for three years was offered as an additional option as I sat with the money guy wrestling over the terms of purchase on a 6-year-old pickup back in February of 2012.
Brad Nelson

I made the guy repeat the offer to make sure I understood what he’d said correctly. I even blurted out that in three years I could have 300,000 miles on this Dodge diesel. It was a good move.

I had a one-on-one chat with my dad a few days after my marriage. One of the things he told me to never do was surprise my wife with something like a new car. He said life would be better if I kept her informed.

She asked me just one question: “Is this something you really want?”

Answering in the affirmative, I was able to tell my buddies she’d got it for me as a Valentine’s Day gift. Then I added, “She even gave me the payment book.”

Now, back to that extended warranty – just over 190,000 miles, as I dropped the pan to change the transmission fluid and filter for the second time, I found part of a huge snap ring in the pan. I had about three months of warranty left. The warranty was only good at a dealer, so that’s where I had it towed.

The warranty people make sure there is no way they can blame the breakage on the owner before they stand the cost of the repair. They said this transmission should have been serviced at least once before the time of the breakdown. They wanted proof. It had been serviced – by me.

Since my first car in 1963, I’ve kept a ledger notebook with each vehicle recording all fuel, oil, parts and repairs with the dates and mileage. The record book for this rig showed I’d changed tranny fluid and filter at 117,380 miles on April 24, 2013. The service manager said he’d never seen anything like that before. He sent a photocopy to the warranty boys. Their comment was that a comprehensive record book like that would stand up in court as proof of service.

To make a long story short, I ended up with a rebuilt transmission which feels better than the original ever did.

Since I intended to make this pickup last, I bought an extra set of wheels shortly after I got it, at about $125 each for spoked aluminum wheels of the same size as the stock wheels.

Sourcing hay across three states year-round means having tires under you adequate for winter conditions. I have never been able to wear out tires so that new tires go on as winter nears. By having two sets of wheels, I’ve been able to put fresh rubber on the road in late fall and, after the last snow the next spring, swap back to tires that have thousands of miles left even though they wouldn’t cut it for ice and snow. I record the date and mileage when tires go on and off the truck.

A friend has his own auto repair business. He had a set of tires stacked up in my size with about half of new tread left. I bought them for $350 for the set. I just took them off, after running one winter and two summers.

Remaining tread is still street-legal, and I’ve put 49,000 miles on them. The best fuel mileage happens on tires down to about half of new tread and less. The last half of the tread wears much slower than the first half. My extra set of wheels have more than paid for themselves.

At 150,000 miles, the wiring to the injectors, which is part of the valve cover gasket, had an issue. These were replaced under the extended warranty. 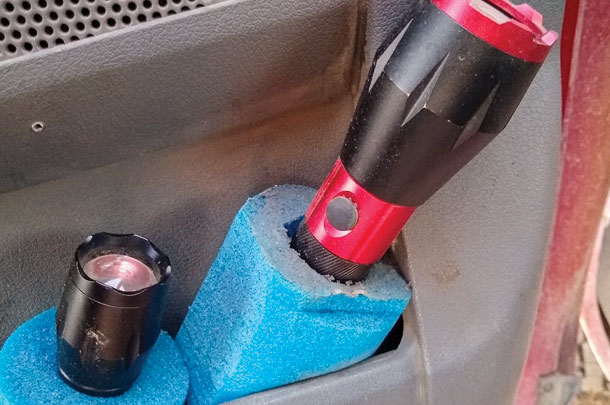 At about 190,000 miles, one U-joint on the driveline was replaced. It and the other two followed at 354,000 miles. All new U-joints are greaseable (they last longer).

About 239,000 miles, the pinion seals on both the front and rear axles were oozing and were replaced.

At around 250,000 miles, the alternator gave up. It’s on its third set of batteries since I’ve had it. 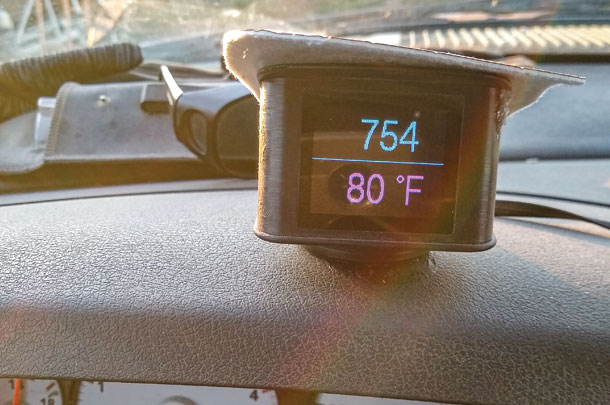 I noticed the tachometer on the dash had gone funky. At $900 for a new instrument panel, I found option “B” on the internet – a device that plugs into the OBD II port and gives accurate reading of the engine RPMs as well as a choice of other data ($39).

The original fuel injectors were replaced at 330,000 miles ($2,400), but with better performance and a noticeable increase in fuel economy.

Shock absorbers have been replaced twice. At 356,000 miles, the muffler was replaced.

The heater/AC blower has been replaced twice, as has the water pump.

My youngest daughter hollered at me because the day after I got it home, I was already changing it – simply hard-wiring a 12-volt to a 110 converter so I could power house-current things from the pickup.

Then one of my sons gave me a low-profile air-ride seat base that came out of a Stinger stack wagon. Air comes from a 12-volt air compressor via a small reservoir made from 2X4 steel tube. It’s also hard-wired. The original driver and passenger seats went away when I found a pair of leather fully reclining seats at a salvage yard.

I have a 32-gallon auxiliary fuel tank in the bed of the pickup. It’s plumbed into the filler neck of the factory fuel tank. With a quarter-turn valve accessible from under the tonneau cover (and when I’m low on fuel), I just stop, turn the valve and keep driving. When the low fuel warning comes on, it takes about 32 gallons to fill the main tank. With the two tanks, I’ve got a range of around 1,200 miles before I need fuel. 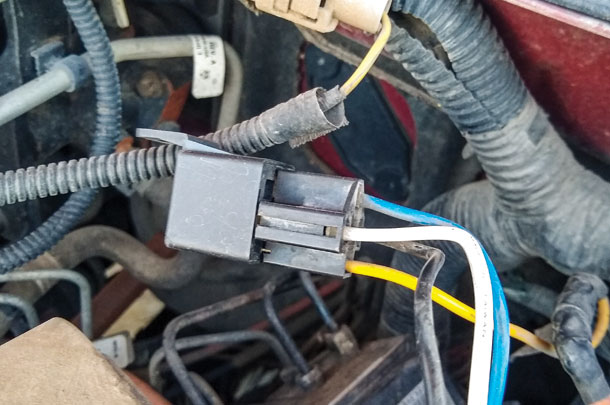 Archaic perhaps, but my Bluetooth is a stand-alone unit that powers up when the ignition is turned on and pairs to my phone.

An oscillating fan is clipped to the dash. And, of course, my Cobra 29 CB radio, a dash cam and a GPS.

Well, the only time I had to find a repair shop before I could go home was when the tailpipe rusted off at the resonator.

It’s powered by the 5.9 Cummins diesel engine. I’ve changed the oil and filters at 15,000-mile intervals for the nine years I’ve had it. It never needs oil added between oil changes. I run 5W-40 synthetic motor oil for diesels and NAPA filters. When something gets loose, I tighten it. When something wears out or breaks, I repair or replace it. Fuel mileage is averaging 19 miles per gallon (that’s doing the math because the computer lies).

It’s been paid for a number of years now, and everything about it fits my oversized carcass. It has almost 415,000 miles on it. I’m into the 75th year on my clock. The current wager is which one of us will last longer.

PHOTO 3: The quote to replace the stock tach was $900, but for $39, I achieved accurate engine speed plus other data.

PHOTO 4: Switches for extra lights (like spotlights) make the lights last longer by using a relay. The switch only sees trigger current; the relay sends the needed power to the lights.