Milk quality monitored in three of four Federal Milk Marketing Orders (FMMOs) improved in 2018, according to an update from the USDA’s Animal and Plant Health Inspection Service (APHIS).

The APHIS Center for Epidemiology and Animal Health (CEAH), in conjunction with the USDA’s Agricultural Marketing Service (AMS) and the National Mastitis Council’s Milk Quality Monitoring Committee, monitor U.S. milk quality using data from bulk tank somatic cell counts (BTSCCs). Data are provided by four of the nation’s 11 FMMOs: Central, Mideast, Southwest and Upper Midwest. Six FMMOs do not collect BTSCC data, and the California FMMO did not go into effect until November 2018. 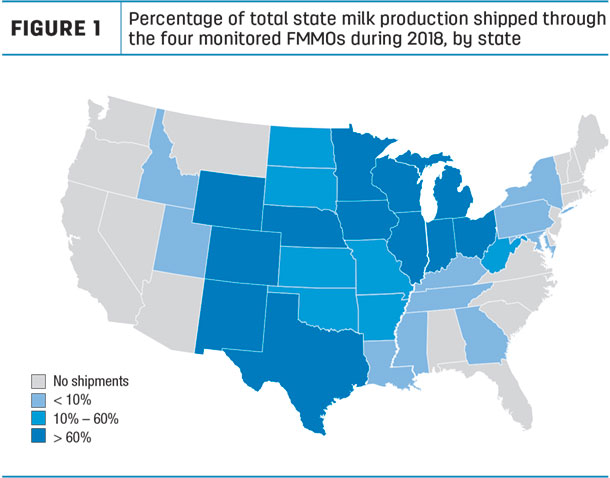 In total, the four FMMOs monitored milk from 20,206 producers (53.9% of U.S. producers licensed to sell milk that year). The monitored milk accounted for 95.9 billion pounds (44.1% of the 217.6 billion pounds of milk produced in the U.S. in 2018). Due to milk volumes, the results are weighted more heavily toward the Upper Midwest. 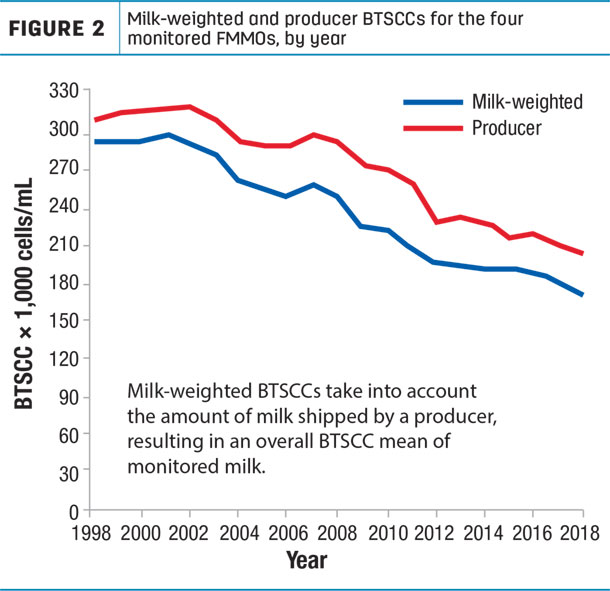 In 2018, the Mideast FMMO had a slight increase in BTSCCs, while the other three FMMOs had a decrease.

Monthly monitoring continues to show that BTSCCs peak during summer (June through September). In 2018, monthly milk-weighted BTSCCs were highest during August (193,000 cells per milliliter) and lowest in April (157,000 cells per milliliter). While BTSCCs generally peak during summer, the percentages of fat and protein in monitored milk were at their lowest values in summer.

May 25 issue: In Focus: SCC another year of milk quality improvement

The DHIA data analyzes individual SCC for cows enrolled in DHIA herds across the U.S. All DHIA-enrolled cows are tested and included, even those that had milk withheld from the bulk tank. DHIA data also includes herds from the southeast U.S., which generally experience higher temperature and humidity values than herds in other parts of the country.