Looking at annual totals, U.S. cheese exports reached 357,910 tons in 2019, up 3% from the year before and the most in five years. Nonfat dry milk shipments were down 2% from the record level of 2018. However, sales improved markedly starting in September and were up 29% in the last four months of the year, once European Union intervention stocks were cleared. On the downside, total whey exports were down 18% from 2018, with China accounting for all of the overall decline. 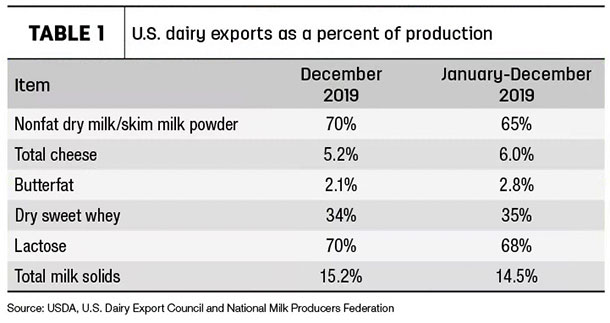 The growth in 2019 dairy exports came despite significant disruptions in trade, noted Michael Dykes, president and CEO of the International Dairy Foods Association (IDFA). “This growth is a testament to America’s dairy industry, which continues to innovate, build new customer bases around the world, and deliver a high-quality product known for consistency, safety and deliciousness,” he said.

Editor's note: This article has been updated from the original to include exporter comments.

U.S. dairy heifer exports closed out 2019 softer after hitting a 12-month high in October, according to latest estimates from USDA’s Foreign Agricultural Service. December exports totaled 989 head, below the monthly average for the year of 1,462.

More than half (500 head) of December’s exports took up residence in Egypt, with 320 moving to Mexico and 161 to Canada.

A shipment of 3,000 more heifers was sent to Egypt in January, although new cattle health protocols related to leukosis will likely close that market to more U.S. cattle, Clayton said.

Clayton, who had just finished loading 1,384 heifers bound for Vietnam from the Port of Olympia, Washington, expects January shipments to that country to top 3,000 head. He said that higher costs related to clean-burning fuels are adding about 10% to shipping budgets.

December’s sales pushed total 2019 dairy heifer exports to about 17,538 head, the lowest total since 2016. Top markets for the year were:

December dairy heifer exports were valued at about $1.7 million, raising the 2019 total to about $31.4 million.

Gerardo Quaassdorff, T.K. Exports Inc., Boston, Virginia, said foreign demand for beef replacement heifers is high and should remain strong through 2020. The USDA reported 6,853 beef heifers were exported in 2019, the highest annual total since 2014. Beef cattle are being sought to help fill an animal protein deficit resulting from the African swine fever outbreak in China, he noted.

Despite the demand for protein, foreign sales of U.S. fat cattle remain a small market. One reason is that some emerging markets – mainly Muslim countries – want young bulls instead of steers.

U.S. December 2019 alfalfa hay exports were the smallest since February, but the total was still enough to push total 2019 sales to a new record high. December shipments raised the 2019 total to 2.685 million metric tons, (MT), edging out the previous high of 2.661 million MT in 2017.

Like alfalfa, December exports of other hay declined slightly in December to 115,199 MT. The 2019 total was about 1.393 million MT, up slightly from 2018 but still the second-lowest annual total in at least 15 years.